Go ahead, watch them die: F**k those joyless moralists who hate football and the Super Bowl

Scolds want us to boycott football, our American right, on Super Bowl Sunday. Because brain damage? No way 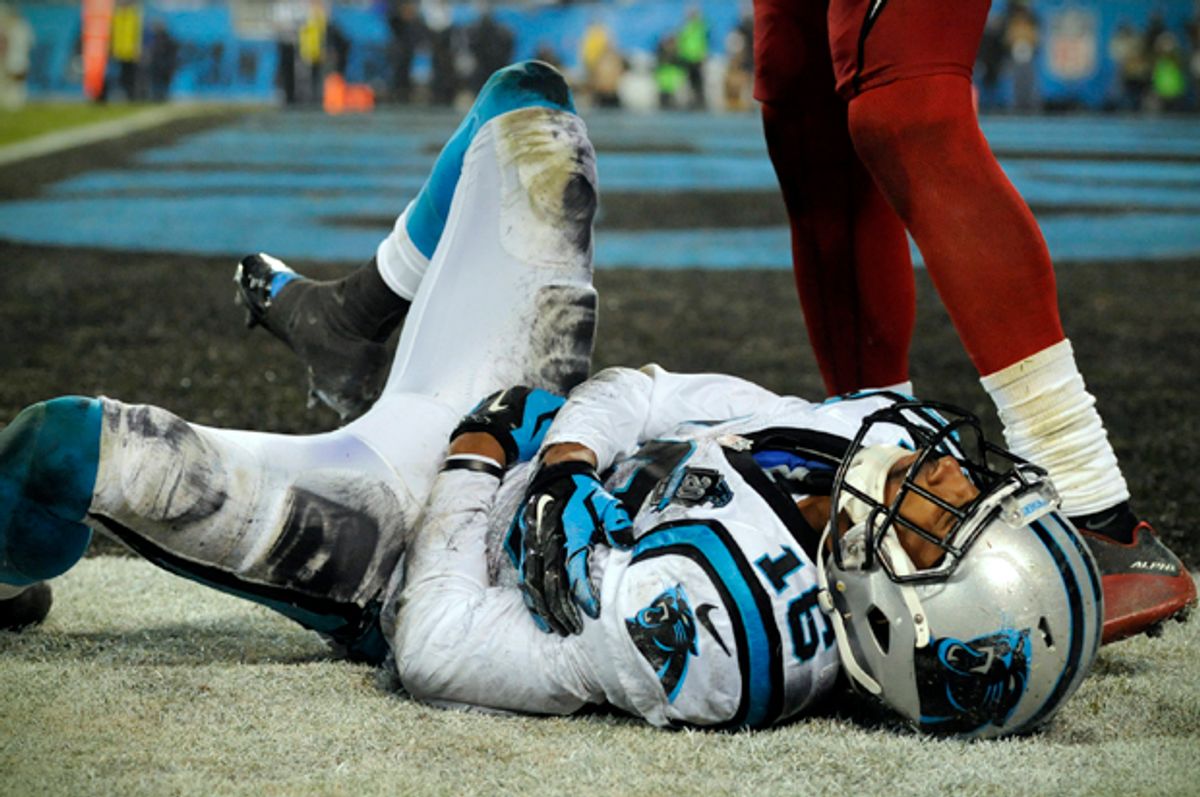 Super Bowl (Pretentious Roman Numeral 50) is upon us, America! Let us give thanks to the Gods of the Gridiron for our biggest and brightest holy day! Let us sit in thrall of ornate and savage beauty! Let us watch Cam Newton run wild like some brilliantly branded Caliban! Let us pray that Peyton Manning’s arm remains attached to the rest of his body, at least until the third quarter! Let us praise the cleverness of the sponsors! Let us consume processed foodstuffs until farts explode from our lucky bottoms!

I kid, of course. But only because I care.

The Super Bowl, after all, offers those of us who are hung up on football the chance to take part in the world’s largest tribal pop shot. Half of our adult population will watch the game. Trillions of dollars will be won and lost. Billions of otherwise billable hours will be wiled away on postmortems. Americans will be provided, if only for 24 sweet hours, a spectacle more triumphant and diverting than Donald Trump’s hair.

The problem—and isn’t there always some problem where pleasure is concerned?—is that a bunch of self-righteous ninnies are going to try to make us feel guilty for watching the Super Bowl.

Because, they say, the game is “dangerous.”

Yeah, well, so is being a construction worker! Or a cop! Or a mountain climber! So why not ban those things, huh? Plus the players get paid a fortune! They’re adults! They know the risks! At least they do now.

Seriously. Why is everyone picking on football? Why is the liberal media parading all these dead, demented former players around? People get dementia and die all the time. You don’t see them parading around dead insurance agents.

You know what it is? It’s depressing.

It’s like having some ugly PETA activist show you video of hogs being decapitated and gutted when all you want to do is enjoy a Little Caesar’s Bacon Wrapped Crust Deep Deep Dish Pizza. Or some bleeding heart cramming footage of bombed kids down your throat during a military flyover.

You get the point.

These media elites are trying to brainwash you into believing that every single football player gets brain damage, which is capital B Bullshit. The percentage of former NFL players who get brain damage is 30 percent—tops.

And that number, by the way, comes from the NFL itself. So, I mean, how can you even trust it? For years, the league totally lied about how dangerous football is. And now, all of a sudden, we’re supposed to believe them? Right. Roger Goodell will do anything to make a buck. I don’t even know how he sleeps at night.

But what I really want to know is, what about the other 70 percent, huh? How come you never hear about the guys who turn out just fine? Guys who never would have had a chance to make it out of the ghetto and thanks to football they’re rich and famous and playing in celebrity golf tournaments? How come nobody ever tells that story?

I’ll tell you why. Because there’s a whole conspiracy out there of doctors and reporters and authors who are making a fortune off this concussion panic. It’s a whole industry now. Just like with climate change.

The goal is to try to make people feel evil for taking pleasure in life, like me sitting there watching the Super Bowl is somehow to blame for the fact that Kenny Stabler’s brain looked like Swiss cheese when he died.

How ridiculous is that? Ask yourself: What difference does it really make whether I watch or not?

Besides, I loved Kenny Stabler. It totally sucks that he got all messed up later in life and couldn’t listen to music or go outside or whatever. But who’s to say what’s really to blame for that? A bunch of doctors say it was football. Yeah, well, you could pay a bunch of doctors to say anything.

The point is, even if football were so dangerous … what about Mixed Martial Arts? And rugby? And soccer! Did you know there are more concussions in girl’s soccer than football? It’s a fact.

Plus, the NFL has totally changed the rules. The guys on defense can’t even deliver a decent shot anymore without the league throwing a hissy fit. The sport is already totally wussed out compared to the old days.

But here’s what all these naysayers keep forgetting: America has become the greatest nation on the face of the earth because we believe in liberty. And liberty boils down to free will.

You can’t tell some badass like Julian Edelman, the Patriots' wide receiver, that he’s got to come out of the Super Bowl just because he maybe got a concussion. And maybe if he gets hit again his brain will maybe hemorrhage and he’ll keel over dead.

It’s like the Rev. Stephen A. Smith preached on ESPN, “I don’t give a damn that he was woozy. This is the Super Bowl. Let’s go over it. That’s how I feel. I’m not going to lie. I’m sorry. You got all off-season to get your head right. Get it together. ”

Besides, don’t you think Julian Edelman knows his own body better than some doctor?

Americans can think for themselves and make up their own minds about what to watch. We don’t need a bunch of benchwarmers trying to smear the game every time some player rapes a woman or beats his kid. Newsflash: Women get raped all the time and kids get abused. Stop blaming football for society’s problems! Stop telling us we’re stupid and evil for loving America’s favorite sport.

Stop venting your snobbery in the form of weasely questions about whether “it’s ethical to consume as entertainment a sport so violent it causes brain damage.”

Who gave these jags the right to judge us, anyway?

The fact is people have always played dangerous games, and fought wars. We’ve always looked up to men man enough to face danger. That’s in our nature. Take a look at the Romans. They packed stadiums to watch gladiators kill each other. You didn’t hear anyone trying to guilt trip them.

People should stop blaming football for human nature. They should stop trying to scapegoat other fans for their own hang-ups. If you don’t like football, turn it off and shut up!