Misfire by Sanders campaign: Bernie's wrong to try to own the word "progressive" in criticism of Hillary

Sanders has done well with an inclusive pitch, but a shift towards policing progressivism leaves him vulnerable 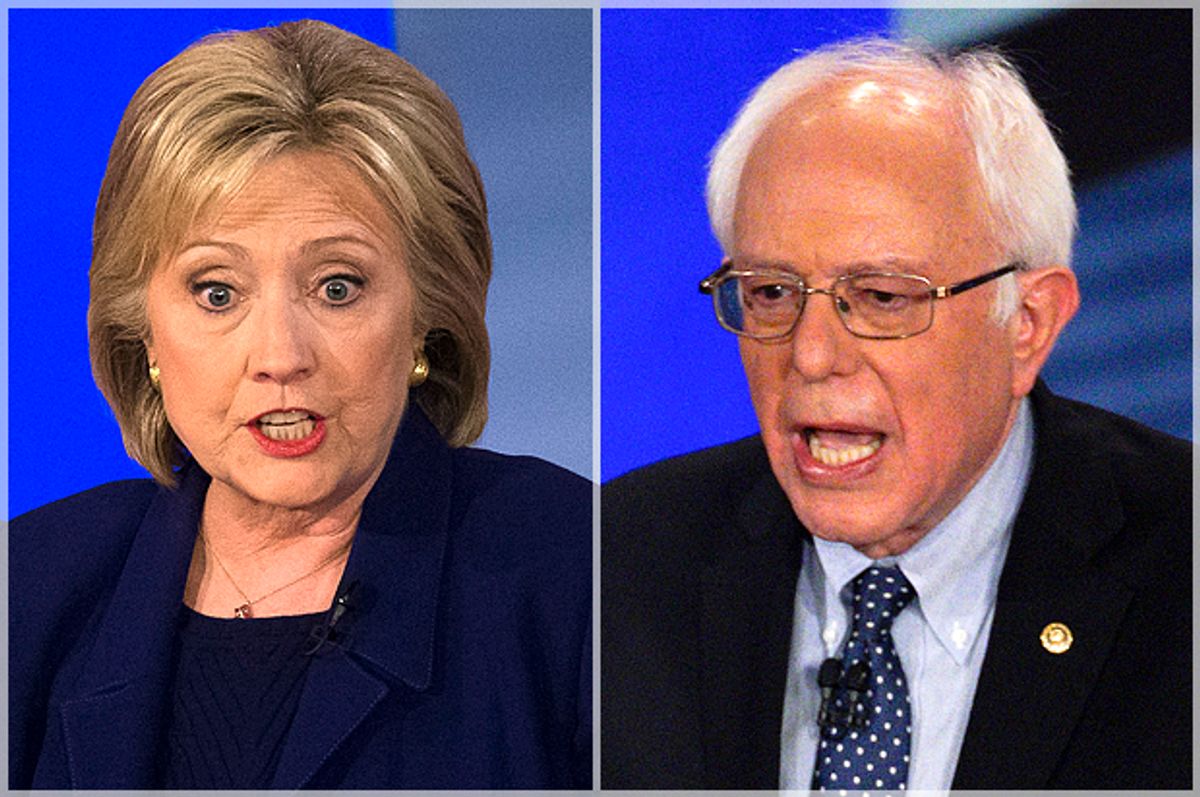 Wednesday night's Democratic town hall on CNN was relatively low-drama and policy-oriented, especially compared to what the Republicans have on offer, but there was one particular moment where the increasing levels of off-stage primary hostility leaked into the proceedings: The battle over who gets to call him or herself a true "progressive." It's a battle that represents a strong shift in how Bernie Sanders's strategy, a choice that will likely backfire on his campaign.

Throughout most of the campaign, Sanders has sold his hardcore progressivism in largely positive terms, with a "if you build it, they will come" message. The argument has been that a strong message of economic justice would be so inherently appealing that people would set aside both their disagreements and their cynicism about government to join together in a political revolution.

You can quibble over whether there's any evidence that such a pathway is possible, but this argument is indisputably an inclusive one, based around the goal of building a coalition of diverse people, which is necessary to get anything done in politics, much less to get any kind of radical change underway.

But after losing the Iowa caucus, Sanders seems to have abruptly changed his tune, shifting away from a "everyone is a progressive if viewed in the right light!" inclusive argument towards gatekeeping and policing the definition of progressivism.

As Brian Beutler at the New Republic explains, this kind ideological purity testing and competition over who is the One True Progressive is a bad look, one that works against the kind of coalition-building that Sanders himself admits needs to happen in order to effect change (or even to win elections).

For the better part of a decade, liberals have gazed upon conservatives with perverse glee as they’ve limited their ranks to an ever shrinking number of True Scotsmen. Their increasingly stringent criterion contributed to the failure of the GOP’s 2012 presidential nominee, Mitt Romney, who at one point had to atone for perceived heterodoxies by describing himself as “severely conservative.”

Brow-beating people over whether or not they are a "true" conservative or progressive is an inherently dumb activity, because it relies on the false assumption that there's a fixed definition of "conservative" or "progressive." The reality is there's a hodgepodge of goals and ideals and differing ideas of how to achieve them, and denying that in favor of purity tests is more about social signaling rather than having an honest debate about the best paths to take to reach shared goals.

The shift towards building fences instead of building bridges left Sanders with a huge political vulnerability that Clinton pounced on during the debate. "I was somewhat amused today that Senator Sanders set himself up to be the gatekeeper," she said, adding that Sanders had defined a "progressive" so narrowly that it excludes President Obama, Vice President Joe Biden, and even liberal legends like Sen. Paul Wellstone. "So I'm not going to let that bother me. I know where I stand. I know who stands with me. I know what I've done."

“I don't think it helps for the senator to be making those kinds of comparisons because clearly we all share a lot of the same hopes and aspirations for our country that we want to see achieved," she added.

The attack was a deadly one, and not just because Clinton highlighted how this line of argument is about purity-testing instead of coalition-building. Without saying anything directly, her response also riffed on some of the uncomfortable gender issues that have shaped this primary season.

Most women, after all, have had the deeply unpleasant experience of having a man dismiss your intelligence, expertise and even values out of hand like this during a disagreement. Having Sanders simply assume his definition of "progressive" is the objective one and Clinton's is not reminds a lot of women of having to deal with this way that men's opinions are casually privileged over women's every day, even if women are able to bring expertise and experience to the table to justify their arguments.

In fact, the ongoing struggle over the phenomenon of the "Bernie bro" really goes back to this issue. It's easy to riff on the occasional Bernie bro who does something like calls women "clittrash" or "vagina voters," but the real source of irritation for many female Clinton supporters is being imperiously lectured, as if you're a small and stupid child, by male Sanders supporters who often have less political experience than you. (Obligatory #notallmen moment: Most male Sanders supporters I know do not do this.) More than any stupid misogynist slur, this behavior suggests a deep discomfort with female expertise and power is motivating this small but extremely vocal minority of Sanders supporters.

Sanders has so far been able to keep a healthy distance from his most aggravating supporters with an upbeat message. But this shift towards gatekeeping pulls him closer to the stereotype of a Bernie bro lecturing the ladies on how their opinions are the most objective-est of all.

Clinton was just so ready for this, too. Her response, that she is perfectly capable of understanding what a progressive is and that she has decades of experience working on these issues to back that up, puts Sanders in a really bad position. After all, who is he to say who is and isn't a progressive?

Clinton worked this theme throughout the town hall. In one particularly good example, she highlighted how she literally spent years working on the issue of universal health care, and how the current system — which she promises to build on — was built on the back of her hard work. The implication was obvious: Who is this guy to come in and simply handwave away her hard-won knowledge like this? She didn't need to use the word "mansplaining," but then again, she didn't need to.

No doubt Sanders fans will throw a fit, but he really did this to himself. The siren call of ideological purity testing is hard to resist, no doubt, but he had done so quite successfully until just this week, because he had to have known that it would make him vulnerable to this line of attack. Now the Bernie bro genie is out of the bottle and there is no stuffing that guy back in.