Brave new world: Shouldn't we all be fighting for men's right to decide the fate of frozen embryos formed from their DNA?

When an embryo is sitting in a deep freeze, a man should have as much right to abort the process as a woman does 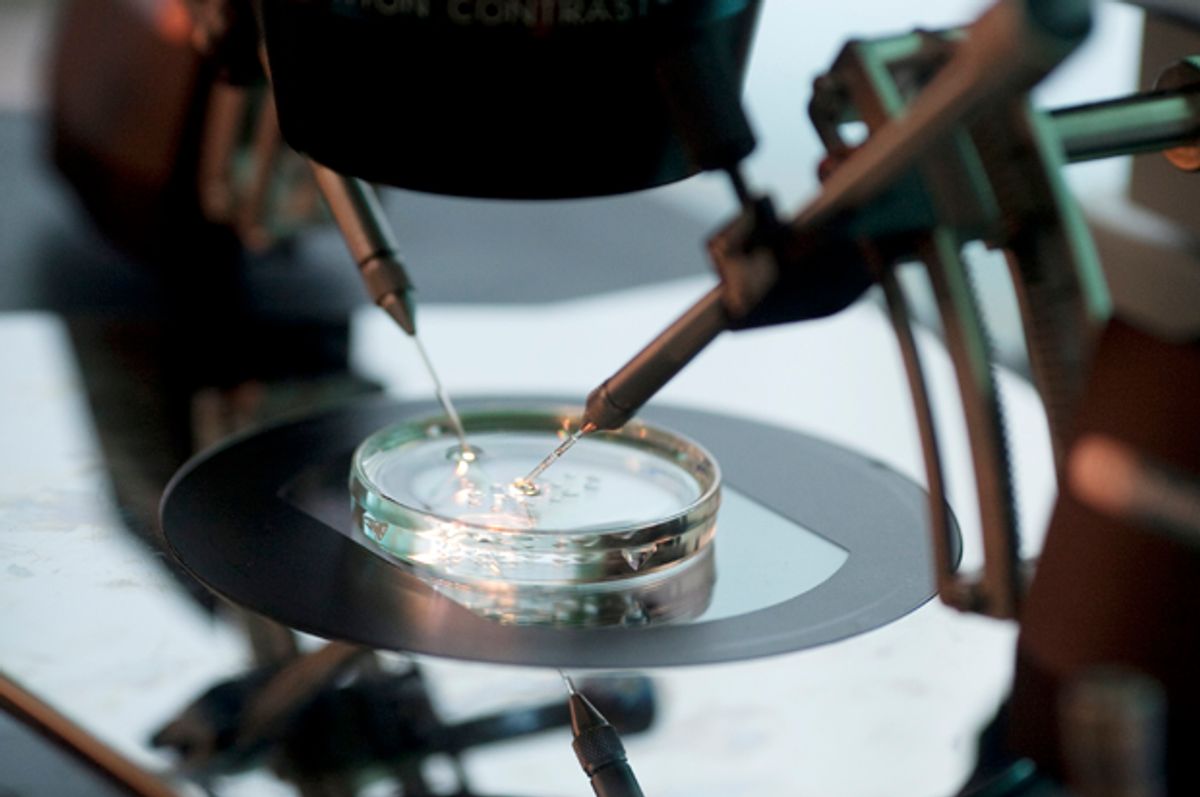 Those of us on the left like to say that we’re all “in it” together: rich, poor; white, brown; queer, straight; old, young; secular, devout; and even other species. In fact, this may be the most fundamental value of movement progressives. To inspire each other and remind ourselves of our ideals, we use terms like "Solidarity," "Better Together," "Every Voice," "Win-Win" and "El Pueblo Unido." The growing campaign to secure Medicaid coverage for abortion is called “All Above All” to underscore the idea that the full range of family planning options available to advantaged women should be available to everyone.

But does “all” include the half of humanity born without a uterus? Does the Supreme Court’s second trimester logic extend to men, too? New reproductive technologies are forcing us to confront the question.

Women the “Deciders” because of Gestation

Until recently, embryonic human life existed only within the womb of a human woman, but today almost a million frozen embryos exist in cryogenic storage, created in vitro by couples with fertility problems or facing chemotherapy. The existence of these embryos expands our conversation about reproductive rights.

When an embryo has implanted inside a woman, most Americans agree that the decision of whether to carry forward or terminate that pregnancy is hers. In many cases, a couple faced with an unexpected pregnancy chooses together to either terminate the pregnancy or carry it forward. But when they disagree, the decision defaults to the person most affected, the woman. It’s her body, we say. She is the one who must gestate that embryo during nine arduous months, feeding it from her blood and bones and risking long-term disability or even death in order to create a new child. Who could possibly have a right to choose that for someone else?

But when advocates like me talk about why abortion is a positive social good, we don’t talk just about the risks and challenges of gestating a fetus. We say that abortion is important for the same reasons that sexual health literacy and contraception are important: because these tools allow women to live the lives of their choosing, form the families of their choosing, and bring children into the world when they are ready to welcome and nurture them.

We say that being able to manage our fertility allows women to finish school. We say it allows us to be better parents, with partners we love when the time is right. We say that when a woman is able to delay or limit childbearing, she and her children are less likely to fall into poverty and get stuck there. All of this is true—empirically so.

But here is something we have been remiss in acknowledging: Being able to govern the timing and circumstances of parenthood is as important for men as it is for women.  Men, too, may suffer mental health harms—or the loss of educational, economic, and personal growth opportunities—when parenthood comes before they are ready. They too may find their dreams shattered or find themselves stuck in an unexpected dependency rather than being able to choose a loving parenthood partnership.

So, when an embryo is sitting in a deep freeze and therefore circumstances have taken a woman’s health and bodily autonomy out of the equation, shouldn’t a man have as much right to abort the process as a woman does?

Shouldn’t producing a child require the consent of both parties?

This is one argument being raised in the Missouri case of a divorced couple who froze embryos together before their marriage disintegrated. The man is asking that nobody incubate the embryos to create a child without his consent. He wants the right of choice rather than forced parenthood—as most women would.

At present he isn’t asking for the male equivalent of abortion—the right to eject the frozen embryos from their current state of suspended animation in a laboratory freezer. Nonetheless, his ex-wife, a conservative Catholic and an attorney, has called in the legal arm of the Pro-Life movement to argue that the case should be decided on a child welfare basis, claiming that the frozen embryos have rights superseding those of the persons who created them.

Abortion foes see this as an opportunity to advance the idea that a fertilized egg is a person. In other words, they see it as an opportunity to ensconce and extend legal logic that they hope to apply more broadly in debates about the formation of fetal life, including contraception, abortion, cloning, and genetic enhancements.

All Together or Only Underdogs?

Like the religious right, those of us who care about voluntary, freely chosen parenthood have an opportunity to think about how this scenario relates to our broader values and goals and how we plan to defend those values and goals in the long run. But it also puts many progressives and especially feminists like me in an awkward position. It requires us to acknowledge that the reproductive agency of men, like the reproductive agency of women, is a human right and matter of justice. In other words, advancing our values about voluntary and freely chosen reproduction may require us to include, as part of our “all,” people that some feminists see as privileged oppressors.

The Shape of the Future

Cases like this one offer us a glimpse of the future. As assistive reproductive technologies advance, we will face an increasing number of cases in which the question of voluntary parenthood is divorced from any question of a woman’s body as a human incubator. Reproductive rights and justice advocates will be forced to clarify whether we are advocating the right to freely chosen pregnancy or freely chosen parenthood, because the two have become separable.

For centuries, family formation, sexual intimacy and parenthood were bound tightly together in the social structure of traditional, patriarchal marriage. Now, increasingly, each of these can be chosen independent of the other two. Soon, the same will be true of creating an embryo and incubating a child. Choice has always been about much more than the right to terminate an ill-conceived pregnancy, but now the possibilities are multiplying.

If social and religious conservatives have their way, the rights of embryos will trump the rights of both women and men, but to date our public discourse almost exclusively centers on women. I would argue that reproductive rights and justice advocates ignore half of this equation—the male half—at a cost. At an abstract level, the cost is lost integrity: It is hard to make a powerful argument about universal human rights that leave some people out. At a practical level, it may be impossible to attain a norm of actively and freely chosen parenthood when men lack the ability to manage their fertility.

If we believe that family planning is a universal human right and powerful lever for advancing family wellbeing, then justice demands that men have rights that are equivalent to those of women. Today the top contraceptives for women require no action for years at a time, are easily reversed, and produce a yearly pregnancy rate as low as 1 in 2,000. Men are forced to choose between condoms, with a 1 in 6 annual pregnancy rate, and vasectomy, which cannot reliably be reversed. To top this off, neither male method is covered under the Obamacare contraceptive mandate, which is classed as female preventive care.

Whether or not reproductive rights and justice advocates fight for better male-controlled contraceptive technologies, and insurance coverage for existing male methods, and the right of men to decide the fate of frozen embryos formed from their DNA will send a message to the world about whether “all” means all.