Dems, stop lying to yourselves about Hillary: Sure, she "gets s*** done" — atrocious s***, that is

The argument that Clinton can navigate the nightmare of D.C. better than Bernie is simply wrong 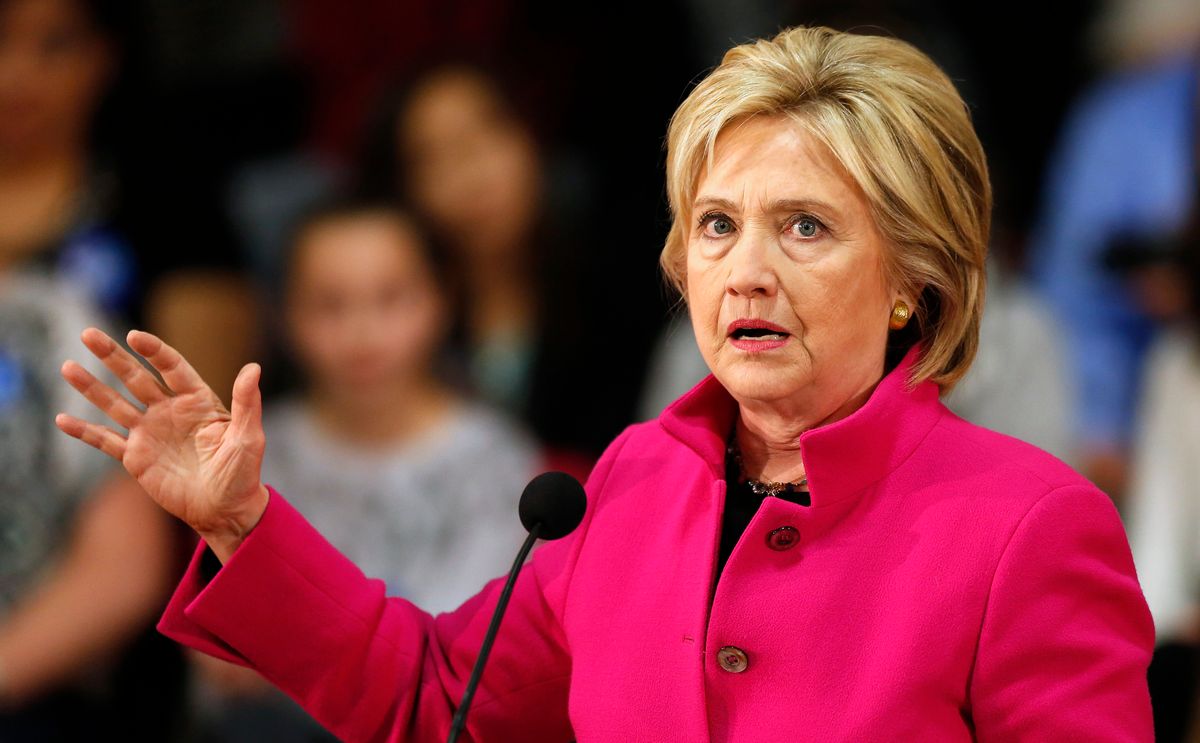 What's most troubling about the daily invective launched against supporters of Bernie Sanders isn't that it is mostly wrong but that it functions to obscure a substantive, interesting and historic conflict over the future of the Democratic Party.

The smokescreen at its most basic level is that Hillary Clinton is a pragmatic realist who will be able to work with Republicans, while Bernie Sanders is an uncompromising idealist whose proposal for a socialist utopia is dead on arrival. There is not much explanation as to why Clinton is more likely to reach a compromise with a group of House Republicans led by a man who has considered Ayn Rand “required reading in my office for all my interns and my staff.” But never mind.

The next line of attacks is designed to put Sanders supporters back on their heels: Clinton is a realist, warts and all, because she is a woman: “YOU DON'T LIKE THAT SHE PLAYS THE GAME? THAT SHE HAS TIES TO THE ESTABLISHMENT? FOR ONE THING, THAT'S HOW SHIT FUCKING GETS DONE. FOR THE OTHER THING, THE BIGGEST THING, A WOMAN DOESN'T GET THE FUCKING OPTION *NOT* TO PLAY THE GAME.”

To recap, Clinton voted to invade Iraq, backed job-killing trade agreements, suggested that black women on welfare were “deadbeats” who were “sitting around the house doing nothing,” called for “more police” and “more prisons” and “more and tougher prison sentences for repeat offenders,” and bases not only her campaign finances but her entire social universe on and amid the superrich who she resides among in Westchester and the Hamptons — because she is a realist who can get things done.

No matter Sanders' legion of women supporters, including many outspoken socialists. This argument renders those women invisible in an effort to inoculate pro-Clinton women's arguments from criticism. The fact that a Sanders supporter might also be a big fan of Elizabeth Warren, and in many cases initially lobbied for her to run for president, is also an automatic nonstarter, as Rebecca Traister made clear: “spare me the wistful paeans to Elizabeth Warren...citing a fondness for her as a get-out-of-sexism card is a dodge.”

Ad hominem attacks against Sanders supporters are on the rise after Iowa, and they are increasingly unkind. Clinton partisans are likely motivated by uncomfortable data points: 86-percent of women under 30 caucusing in Iowa said they support Sanders.

And so the sexism argument doesn't wash. But since opposing Clinton necessarily entails some unsavory or unfortunate motivation, there are other arguments to pursue. Like that young people, God bless them, are innocent of how the world works.

“Bernie’s attractiveness as a candidate relies on the premise of purity — a political value as ancient as politics itself,” wrote The New Yorker's Alexandra Schwartz, dismissing her youthful cohort for their naivete before knocking them for not even being very cool young people to begin with. “When his campaign tweets that it’s 'high time we stopped bailing out Wall Street and started repairing Main Street,' you have to wonder why his youngest supporters, so attuned to staleness in all things cultural, are letting him get away with political rhetoric that would have seemed old even in 2012.”

At the end of the day, all arguments against Clinton or in defense of Sanders can and will be reduced to something unrelated to their politics. Take Cedric Johnson, a professor of African American studies, who recently penned a careful and historically-grounded article. It critiqued Ta-Nehisi Coates' argument for reparations and the ensuing knock on Sanders by defending socialism's track record of building mass movements that brought economic gains to black people and fought white supremacy. In response, Yoni Appelbaum, The Atlantic's Washington Bureau Chief, dismissed it as “Marxplaining.”

As a growing number of black leaders on the left endorse Sanders, the liberal commentariat finds itself in a bind. So expect more articles — citing, say, the Cuban Revolution's record on race — contending that Sanders' campaign is fundamentally incompatible with black aspirations.

Whatever the argument, the entire edifice of the giant anti-Sanders-trolling machine has been constructed on one basic and incorrect premise: Clinton has the battle scars to prove she would actually get “shit” done, while Sanders has the privilege of tromping through fantasyland. But what shit would Clinton actually want to get done? More to the point, what shit has she gotten done? Therein lies a rhetorical sleight of hand: the notion, as Mark Joseph Stern repeated in a recent article, that substantive differences between the candidates are limited to “mostly minor policy disputes.”

In other words, Clinton and Sanders want the same things, and simply differ on how to get there. If that's true, then people must have some really terrible motivations for opposing Clinton, who if elected would be the first woman president.

In reality, a pragmatic approach would be proposing left policies, meeting the opposition halfway, and agreeing to still-pretty-good measures as a solution. The shit that Clinton has gotten done, in reality, has often been pretty shitty. Namely, she has supported anti-worker and racist policies that benefit economic elites. Clintonites reaching across the aisle brought us the Iraq War, Wall Street deregulation, the destruction of welfare and NAFTA.

Those things don't qualify as worthy if flawed compromises but rather as things that leftists dislike and find to be inconsistent with their values. When Democrats and Republicans have agreed on things in recent decades—from so-called education reform to further skewing the global economy towards the interests of capital—they played out to the advantage of elites and to the detriment of poor and working people. What compromise has meant for decades is that Democrats work with Republicans to pass reactionary legislation, and in doing so moved the goal posts yet farther to the right.

Supporters like Sanders because he wants single-payer healthcare, free college for all, and is calling for a political revolution to overthrow plutocracy. To put it simply, people on the left dislike Clinton because she is a plutocrat with a track record to match.

Many Clinton supporters seem resistant to the idea that there is a political left in the United States, however battered and diminished it might have become in recent years. Crucially, in the 1990s, it was an anti-Clinton Administration left, protesting NAFTA, the World Trade Organization, mass incarceration and the destruction of welfare. And then came Bush, and demonstrations were launched against the Iraq invasion (and the one of Afghanistan too). Then there was the financier-inflicted crash, historic income inequality, and Occupy Wall Street.

If there was one basic idea uniting the left during these decades in the wilderness it was an opposition to the turn toward corporate-aligned neoliberalism, from Bill Clinton to Tony Blair, as the sole alternative to a xenophobic, ruthlessly austerian and neoconservative right wing. But certain liberals are ideologically incapable of understanding that there is a segment of people to their left who are, as Andrew O'Hehir once put it, their political opponents. This is a two-party system and the left has nowhere else to go: as establishment liberals never tire of reminding the left, voting for Nader didn't work out. So here we are, having a robust if too often confused debate in a primary.

There is no doubt that Clinton has faced sexism. And the online harassment that many women face, for many reasons, is atrocious, and anyone who has been so attacked no doubt has a right to be angry. Sexist internet trolls are deplorable. But here, I'm addressing credentialed commentators like Michelle Goldberg, who suggested that it was sexist of me to argue that Clinton might lack feminist credentials because she has stoked racist tropes about black women to defend swiping welfare from poor mothers.

Many Clinton partisans have sunk into a very sad and cynical muck. It is unfathomable to portray personal offense taken on behalf of one of the most powerful human beings on earth as more consequential than that human being's track record helping to launch a war in Iraq that has killed hundreds of thousands people.

People are wrong to dismiss the huge value in electing a woman to the presidency. What some Clinton supporters seem unwilling to accept, however, is that for people on the left, making Clinton that first woman president is only slightly more palatable than choosing Carly Fiorina. As Mahroh Jahangiri wrote, “the problem with Hillary isn’t even that she hasn’t been progressive enough. The problem with Hillary is that on measures important for those who aren’t just capital-w-for-white 'Women' (i.e., those who care about war and Walmart and prisons in addition to a Planned Parenthood endorsement), she has gone out of her way—including by joining GOP ranks — to implement violent policies against non-white women and their communities at home and abroad.”

It's healthy to have a political debate, and the Democratic Party hasn't had a real, substantive one in a long time. Let's just acknowledge that we're engaged in a clash of political ideas between the party's left and right. Argue your case. Stop endlessly pivoting around the entitled sense that a former first lady, senator and secretary of state somehow cannot be criticized for policies that, to many on this country's long-suffering left-wing, are contrary to deeply held principles and beliefs.