How Coldplay became cool: Haters keep saying they're too soft, too earnest, too dorky — and they still don't care 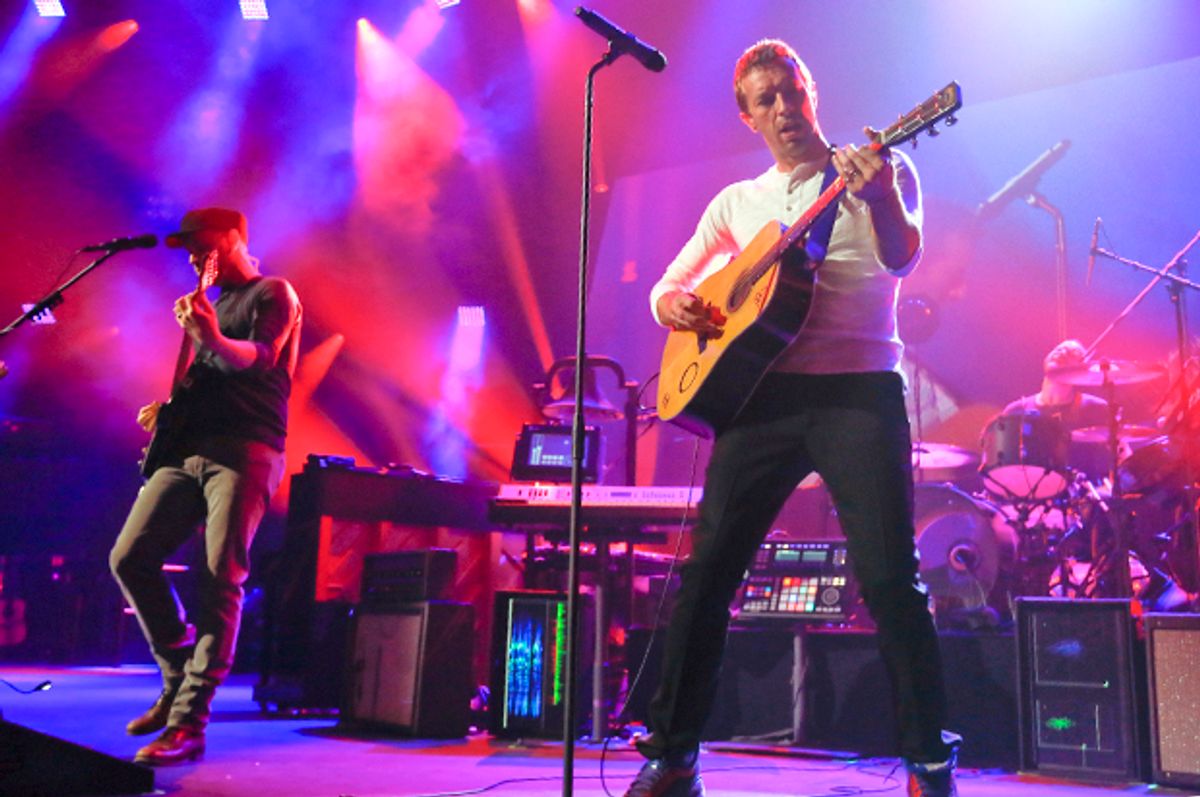 At this juncture, it's safe to say the Super Bowl halftime show is nearly as popular as the football game itself. Although a recent New York Times article rather astutely characterized the 12-minute performance as "a gleaming confluence of big-time corporate agendas — N.F.L., TV networks, sponsors and brand-name performers all promoting something — that masquerades as a brief but over-the-top party," the paper also notes the show "has drawn more than 115 million viewers" in the recent past. The carrot for many viewers seems to be the element of surprise: Katy Perry's 2015 performance produced a fire Missy Elliott cameo and the indelible Left Shark meme, while past years have spawned a Destiny's Child reunion, M.I.A. flipping a middle finger to the camera and the infamous Janet Jackson/Justin Timberlake wardrobe malfunction.

Yet it's likely no accident that in the wake of the latter incident, the halftime show subsequently featured a string of boomer-friendly rock & roll artists—e.g., Paul McCartney, the Rolling Stones, the Who, Bruce Springsteen & the E Street Band. (This string was only interrupted by a performance from Prince, whose 2007 appearance is widely regarded as one of the best of all time.) In recent years, however, the Super Bowl has eased back toward the spectacle of pop stars and flashy special guests. And so in 2016, viewers are being treated to an appearance from U.K. stadium-rock juggernauts Coldplay, who will perform with a youth orchestra and two returning Super Bowl veterans, Beyoncé and Bruno Mars.

While Beyoncé's presence is mollifying critics somewhat, many people are not pleased with the decision to feature Coldplay. A common complaint is that the band's music is boring or sleepy. That's not necessarily wrong: At their least successful, Coldplay are indeed soporific and mellow (see: 2014's "Magic"), and coast on frothy falsetto and saccharine sentiments (e.g., "Every Teardrop Is a Waterfall") rather than structure. As Andy Gill wrote in 2008, "Their music sounds like Radiohead with all the spiky, difficult, interesting bits boiled out of it, resulting in something with the sonic consistency of wilted spinach; it retains the crowd-pleasing hooks and sing-along choruses while dispensing with the more challenging, dissonant aspects and sudden, 90-degree shifts in direction."

However, the band's certainly sensitive to such jabs. In 2005, the Associated Press noted that "when the New York Daily News panned its concert as dull because of a concentration of slow-moving songs, Coldplay changed its set." More recently, the band's moved to freshen up their sound: In a change from the muted approach of 2014's "Ghost Stories," their latest LP, "A Head Full of Dreams," boasts both contemporary-sounding synthpop and brighter production from Norwegian producers Stargate. "We wanted to marry all the music that we love, from Drake to Oasis," Chris Martin told Rolling Stone about the record. "There was a feeling that we don't have anything to lose. We're very comfortable now with the fact that we're not for everybody." Sure, the last statement is one only massive superstars have the luxury of saying—Coldplay's not hurting for fans, so critical barbs don't make a dent in their trajectory—but it does underscore that they're self-aware about their place in music.

Indeed, the band's never come off as defensive about being so blatantly earnest. At times, Martin has almost relished being disliked. “That’s the great thing about people who hate us,” he said in 2005. “We can suck out the energy and make it into something positive. It’s like in 'Back to the Future,' where you have this device that can turn garbage into a time traveler.” In fact, despite their reputation, the members of Coldplay don't take themselves very seriously: Martin dropped an f-bomb in a live pre-Super Bowl press conference and hilariously inducted Peter Gabriel into the Rock and Roll Hall of Fame. (He also does a decent Mick Jagger impression.) Besides being a good way to deflect criticism, this lighthearted attitude also goes a long way toward insulating them from pomposity—it takes the edge off, as it were.

Much of the condemnation of Coldplay tends not to judge them as they are (sensitive pop balladeers with emotive, sincere lyrics) but chide them for not being something else—more ambitious or boundary-pushing, perhaps. Thing is, the band isn't afraid of evolving or stretching themselves; they're just not very flashy about it. They sampled Kraftwerk on the chilly early career highlight "Talk" and have covered Echo & The Bunnymen's beloved '80s hit "Lips Like Sugar," while the song "Clocks" was remixed by respected artists Röyksopp and Fedde Le Grand. The 2008 album "Viva la Vida or Death and All His Friends," meanwhile, was produced by Brian Eno, who pushed the band to merge grand atmospherics with intimate expressions of spirituality. And the band's reputation for being a dreck-driven, midtempo ballad machine isn't quite earned: Both 2002's "A Rush of Blood to the Head" and 2005's "X&Y" contain sleek, modern-sounding music that steered the pop conversation rather than followed existing threads.

Coldplay will be the first ones to admit they just do their own thing and follow their muse, even if they're led in bizarre directions. The band's certainly not subversive—and neither are their collaborators—but they're also not suppressing their odd detours for the sake of commercial concessions or being palatable. (How else to explain the ridiculous, ape-driven "Adventure of a Lifetime" video?) And they'll freely admit when things aren't working: Martin has mocked his own lyrics in the past, and when talking about David Bowie nixing a Coldplay collaboration, the vocalist was cheerful about the rejection. "He was so wonderfully humorous and kind in his dismissal!" Martin told CBS Sunday Morning. "We were on the phone, and I said, 'What do you think about this?' He said, 'Oh, it's not one of your best, Chris.' And that was it. I was like, 'You know what? He's right. This is s***!'"

It's refreshing to hear a band continually redefining who they are, thanks to rigorous self-examination and adoption of modern trends. In an age when every pop star move and gesture is carefully choreographed, Martin's carefree confidence—some might even say swagger—is wholly entertaining. He's certainly taking his cues from Bono, who's the king of self-deprecation. In fact, the longer they're around, the more it's clear Coldplay faces the same kind of cynical disapproval lobbed at U2. Favoring uplifting music and unabashedly gigantic, populist anthems is enough to become a magnet for hate, an object of derision.

Of course, being so secure and cheerfully self-effacing doesn't give Coldplay the right to be above reproach. After all, the band's wince-inducing tendency toward cultural appropriation and stereotypes, as seen in their video imagery, is problematic and shouldn't just be ignored (or perpetuated). For a band so involved in issues of global health and human rights, it's vital that they're more sensitive about how they portray other cultures and incorporate genres. If they're smart, Coldplay will simply let their music make grand statements during the Super Bowl performance. "I spoke to one of the other artists who did it a few years ago, and he said, 'It's gotta be muscle memory,'" Martin said during that same recent "CBS Sunday Morning" appearance. "Well, I'll tell you, it was Bruce Springsteen, 'cause I realized I was starting to do his gruff accent: 'You gotta know every note, man. Twelve minutes. It ain't long, but it's long enough!'"