A question for the presidential candidates: Anti-choice looniness has reached frightening levels, so why the hell aren't you talking about it?

Slavery comparison, screaming about "body parts: Anti-choicers are nutty, so we need to be talking about it more 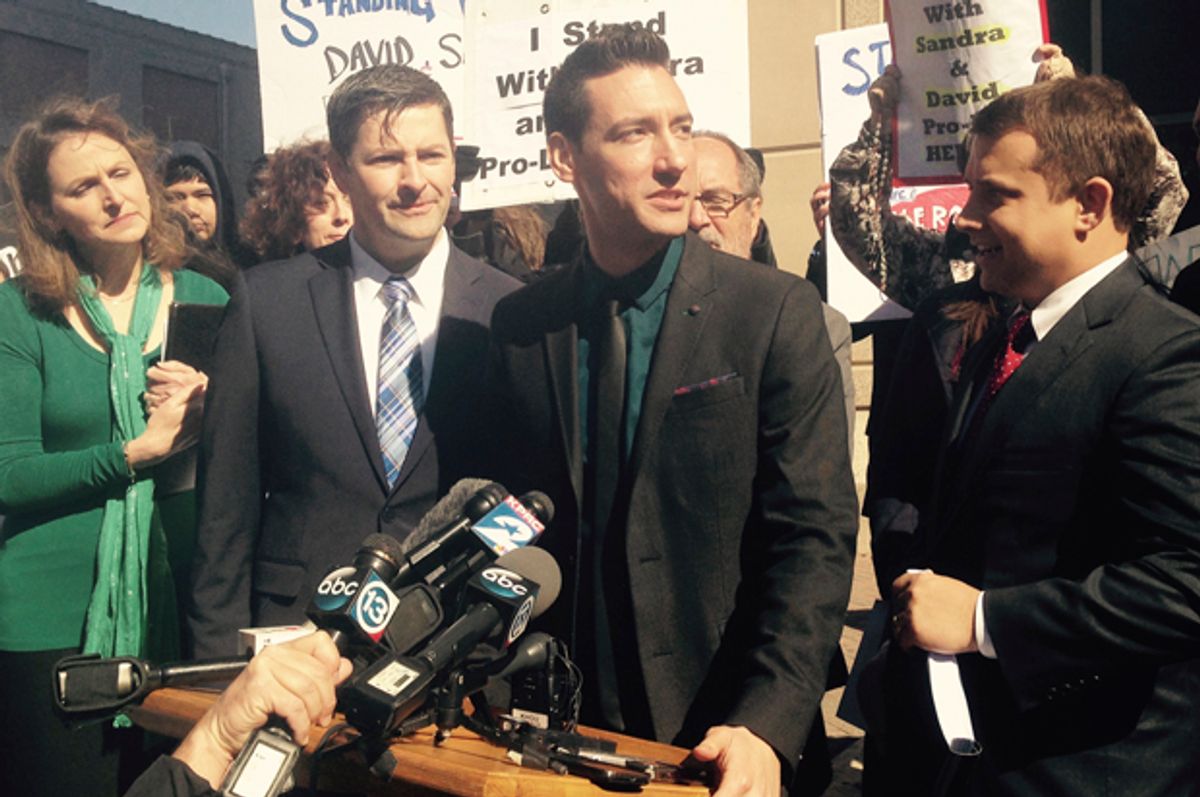 David Daleiden speaks at a news conference outside a court in Houston, Texas February 4, 2016. (Reuters/Ruthy Munoz)
--

Reproductive rights has barely come up during the Democratic debates, which clearly frustrates Hillary Clinton, who has to cram mentions of it in wherever she can. One man said the word "abortion" during Wednesday night's CNN town hall, but only in service of hinting that it's a minor issue that gets too much attention.

In contrast, the Republicans have been crawling over each other in debates to highlight who is the most eager to end low-cost contraception access for women at Planned Parenthood. Unfortunately, they have not been confronted with the results of these contraception defunding schemes,  which have resulted in a decline in contraception use for low-income women and an entirely predictable surge the number of births as a result.

This combination of ignoring the issue on the Democratic side and downplaying the results of the policies on the Republican side is that the public is missing a major opportunity to hear about and discuss how radical the religious right — and their Republican Party that is still in the religious right's thrall — has become on this issue.

Just look what's going on in Texas, the state that passed a draconian anti-abortion law that is being argued in front of the Supreme Court in March and, if upheld, will lay the groundwork for red states to make safe abortion impossible to offer legally, by allowing these states to pass a bunch of unnecessary standards designed to be too impossible for doctors to meet. The political maneuvering around abortion has become a real circus there, with the anti-choicers playing the role, of course, of the clowns. But you know, scary clowns. Not the fun kind.

Last year, an activist named David Daleiden released some videos he claimed showed that Planned Parenthood is running a secret black market operation to sell fetal body parts. The videos showed no such thing, of course. On the contrary, Daleiden spent years setting up meetings and trying, in various ways, to get a Planned Parenthood official to offer to sell fetal body parts, only to show, time and time again, that they refused to do so.

Nonetheless, Texas Lt. Gov. Dan Patrick pushed the Harris County prosecutor's office to convene a grand jury to investigate the claims. They did and the result was that they cleared Planned Parenthood of all accusations and charged Daleiden and his co-conspirator Sandra Merritt instead, accusing the two of falsifying government documents and trying to buy fetal body parts, which is apparently illegal even if the people you are trying to buy from refuse to sell.

Daleiden turned himself in for arrest, but, because the anti-choice movement has devolved into a complete clown show, he's acting like it's a big ol' triumph for him. He and his lawyers turned down a plea offer that would result in probation---truly a slap on the wrist for a man who has worked so hard to deny health care to millions of women — but Daleiden refused the deal, and is preening like he's some kind of noble warrior for it.

"I think we all know that every day that goes by that the Texas authorities do not prosecute Planned Parenthood for their illegal trade in baby parts, they are sending a message to the entire country,” Daleiden said in a speech in front of the courthouse. “The state of Texas right now is open for business in baby body parts.”

These are the words of someone who has lost touch with reality so thoroughly that it's an open question whether he ever really had it. And yet his videos have been brought up and used to justify stripping women of contraception access in multiple Republican debates. Just once moderators need to ask the candidates, "Do you agree with David Daleiden that Texas is 'open for business in baby body parts'?" Instead of downplaying the nuttiness of this whole enterprise, let's get it out there and get the Republicans on the record to agree with this.

But this kind of unhinged rhetoric is standard when it comes to anti-choicers. After Ted Cruz's victory in Iowa, Jim Graham, the president of Texas Right To Life, let loose with a triumphant email to his supporters where he compared, and this is not a joke, the religious right to slaves and the Republican Party to slave masters.

"I am a runaway slave," Graham's email begins.  "I have left the establishment plantation."

And yes, in case you're wondering, Graham is a white guy. And he sent this out on the second day of Black History Month.

Graham resorted to this risible analogy because, in his opinion, Texas Republicans aren't working hard enough to deny women the right to control their own bodies, even though they literally passed a draconian abortion law meant to create a pathway to a de facto ban on abortion in much of the country.

"I became a runaway slave, a free man," he says, of his choice to, I guess, not call himself a Republican anymore. "Free at last."

"Attacks on women's health aren't new, but using race-baiting to further an ideological attack -- particularly on black people -- is just flat out insulting," Alencia Johnson, a spokesperson for Planned Parenthood explained over email. "Texas Right to Life and similar organizations are appropriating a violent and abhorrent part of black history, and anti-choice presidential candidates are touting their support. Politicians must denounce this hateful rhetoric, or be held responsible for allowing the continued marginalization of people of color.”

A psychologist could have a field day with the racist anxieties underlying Graham's rhetoric, no doubt, but racial weirdness is standard in the anti-choice movement. Activists regularly imply that black women get abortions because they hate their own children or try to hijack the Black Lives Matter movement in order to argue that human embryos deserve more attention than actual people getting shot by police.

Over the weekend, in fact, anti-choice activists scheduled an event in Louisville to accuse Planned Parenthood of "targeting" minority women. It's a silly accusation, based in part on a belief that women of color are incapable of making their own choices. It's also pure projection, as efforts to slash funding for contraception services are aimed at hurting low income women, who are disproportionately women of color.

"If these politicians care about black lives as much as they claim, they would be talking about voting rights, over-policing of the black community, sexual violence against black and trans women, and eliminating the school to prison pipeline --- just to name a few," Johnson argued.

Graham's claim that he suffers like slaves did because he isn't able to strip women of their basic rights fast enough is just par for the course when it comes to anti-choicers. The race-baiting tactics are both about being provocative on the issue of reproductive rights while simultaneously minimizing the very real history of racism in this country.

But somehow none of this nuttiness gets much national attention, even though, if the country at large understood exactly how bizarre, hateful, egotistical, delusional, and racist the anti-choice movement was, anti-choicers wouldn't be nearly as effective as they are. Which is why we need to have a serious discussion of these issues, instead of the downplay-and-ignore strategy going on in the presidential debates right now.