In the age of all-American anger: Bernie Sanders, "The Big Short" & a nation that's had it up to here

Nearly a decade after plutocrats exploded the economy, we're just as unequal as ever — and people are fed up 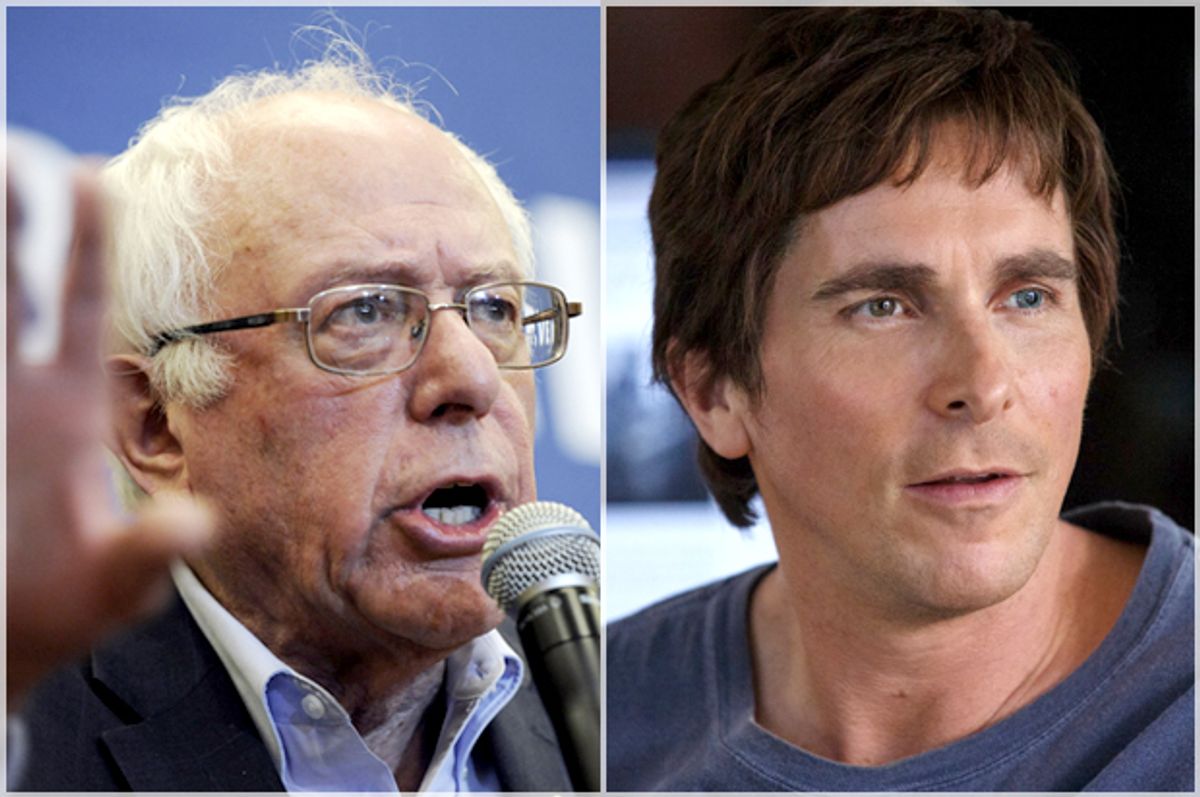 We are always told that life isn’t fair, and most of us accept that truism. I have to be honest and tell my kids that they might not be the smartest, fastest, luckiest or richest people out there. That’s just how it goes. However, “fairness” isn’t the same thing as justice.

The biggest financial crime of my lifetime, the financial collapse of 2008, is a historic injustice that has gone unpunished. The people who caused it also profited from it. The plutocratic class, spanning from Wall Street to Silicon Valley,   manipulate politicians to get whatever they want, while the rest of us get almost nothing for our votes. This state of affairs is obvious to anyone who cares to look, and it's the driving factor behind Bernie Sanders’ strong performance in Iowa. If this election becomes a referendum on that unaddressed outrage, Sanders can and should become the next president.

The housing collapse and subsequent bailout of Wall Street was a graft of Biblical proportions and an animating factor in my own political evolution from Republican voter to liberal. Trillions were spent bailing out banks, eventually making the financial class even wealthier, while the rest of us suffered job losses, declining asset prices and a reversal of hard fought fortunes. There was no reckoning for the kleptocracy.

Conservatives and liberals often agree about the stupidity and injustice of bailing out Wall Street, while leaving the rest of us hanging, but conventional politicians on both sides of the aisle have done nothing to rectify this historic wrong. I would add that this incident stands as Barack Obama’s greatest failure. Regular people paid the tab for the graft and corruption of Wall Street, and frustration and resentment have been brewing ever since, driving the rise of the Tea Party, Occupy Wall Street, Donald Trump and growing white mortality. Despite the greatest economic reaming since 1929, consumers and taxpayers have answered only with self-destruction and impotent rage, while our slimy, gutless and corrupt political class begs more campaign cash from the same people who caused the mess.

I just happened to catch "The Big Short" last week, which nicely rehashes why we should all be so upset at the people and institutions that screwed America. The film follows outsiders who saw the crash coming, and the audience is put in the backward position of wishing for the collapse to come. But even when the scheme collapses, the people who caused it get even more money in the form of free cash from bailouts and the fed.

I’m not even angry about the stupidity and graft of the bloated housing market, but I am furious over what happened afterward. Nothing. American taxpayer largess was tapped to cover bad bets by the wealthiest few, while taxpayers and homeowners lost everything. I personally lost money and opportunity, and many people, family, friends and coworkers, all ended up poorer for it. My hometown of Reno, Nevada, was hit particularly hard. We are on the mend, now eight years later, but damage has been profound and lives have been unalterably disrupted. To add insult, homeowners and regular people were often blamed for a broken system by a fact-free conservative press. In the end, no one paid the price for systemic fraud, and banks were handed billions in free money that they lent back to regular people at 12 percent interest.

It’s easy to understand the rage of the American electorate if you think about it for even a moment.

The glorified mafia family we mislabel “American finance” is the biggest reason Bernie Sanders can and should prevail in November. It is only him (or someone like him) who can finally address the simmering, residual rage over this issue. Hillary will never do it, what with her cozy relationships to Wall Street bankers. Even if she cared to address the issue (and I doubt it), she has no credibility to do so. She is as much a creation of Wall Street collusion as anyone on the Republican ticket. By contrast, Sanders is anti-greed, a man of modest means with wild hair and penchant for '60s idealism. He comes to the race from a time before the mantra “greed is good” was enshrined in American capitalism.

The conservative side has no answer to the financial crisis, even as the same anger drives supporters of Donald Trump. Working class people who support Republicans have been purposely deceived about why they’re really angry. Those at the bottom rungs of income paid for the crimes of private jet owners. It’s both outlandish and shameful that working people have been deceived into supporting the same interests that continue to screw them over. The only answer offered up from the likes of Trump, Ted Cruz and Marco Rubio is to shift blame to unpopular religious minorities and Mexicans. Even a populist GOP can never be the solution to the financial crimes of the well-connected, because you can’t fight injustice by creating more of it.

There are many other problems that plague America during this election cycle. Sanders talks with passion about racial injustice, climate change and many other issues, and these are critical issues that must be addressed. Yet it is the naked financial injustice of 2008 that sits at the heart of Sanders’ success.

I believe in capitalism and a free market, but it is not a perfect or holy system. Only the wealthiest and well connected see the untamed market as the “greatest public good,” because it’s been so damn good to them. There is also an ugly collusion of Wall Street, banks, high finance and various media enablers, like Fox News and the Wall Street Journal, who are all joined at the hip to perpetuate a broken system. Somehow in all of this, the unregulated and often criminal financial system has become equated with “freedom.” It’s an elaborate fiction that too many working people believe, and it’s also the greatest PR con of all time. It’s time to put this nonsense to rest, and the Sanders campaign is the only tool that can do the job.