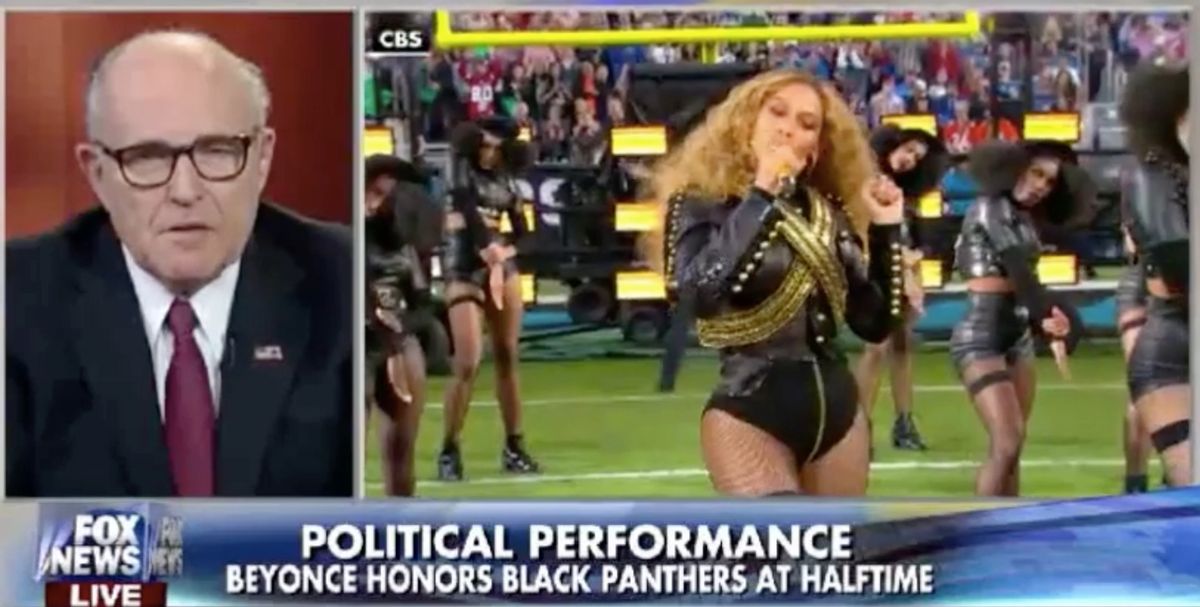 Beyoncé anticipated this. She knew the backlash was coming as she sings in her new single "Formation," "You know you that b**ch when you cause all this conversation." With her imagery of police officers lined in riot gear with their arms in the air in her music video and her background dancers dressed as Black Panthers during her halftime performance at Super Bowl 50, Beyoncé is undoubtedly making a bold political statement and as she surely expected, people are talking.

"I thought it was really outrageous that she used it as a platform to attack police officers who are the people who protect her and protect us, and keep us alive," former New York City mayor Rudy Giuliani said Monday on "Fox & Friends," ripping the performance as "ridiculous."

"The vast majority of police officers risk their lives to keep us safe,"Giuliani explained, taking issue with what he deemed an inappropriate "political position" at the Super Bowl. "What we should be doing in the African-American community, and all communities, is build up respect for police officers," he offered. "You're talking to middle America when you have the Super Bowl," Giuliani reminded the co-hosts. "Let's have, you know, decent wholesome entertainment, and not use it as a platform to attack the people who, you know, put their lives at risk to save us."

Beyoncé, of course, is no stranger to controversy and Sunday's wasn't her first brush with conservative backlash following a Super Bowl halftime performance. After her 2013 reunion with Destiny's Child, "National Review" editor Rich Lowry slammed Beyoncé's performance "as tasteless and unedifying,” while his colleague Kathryn Jean Lopez implored the superstar to "put a dress on." This year, some offended by messages like "stop shooting us" prominently featured in the "Formation" video have called for a boycott of the artist:

I don't usually hashtag but the fact that they invited Beyoncé to perform an anti-police song during the Super Bowl is...

According to the Washington Examiner, Members of the National Sheriffs' Association meeting in Washington, D.C. collectively turned their backs during the halftime performance to protest Beyoncé. The group's president, Sheriff Danny Glick of Laramie County, Wyoming, "called on the NFL to choose less controversial half time entertainment in the future."