Obama caves to the military-industrial complex, does an about-face on defense spending reductions 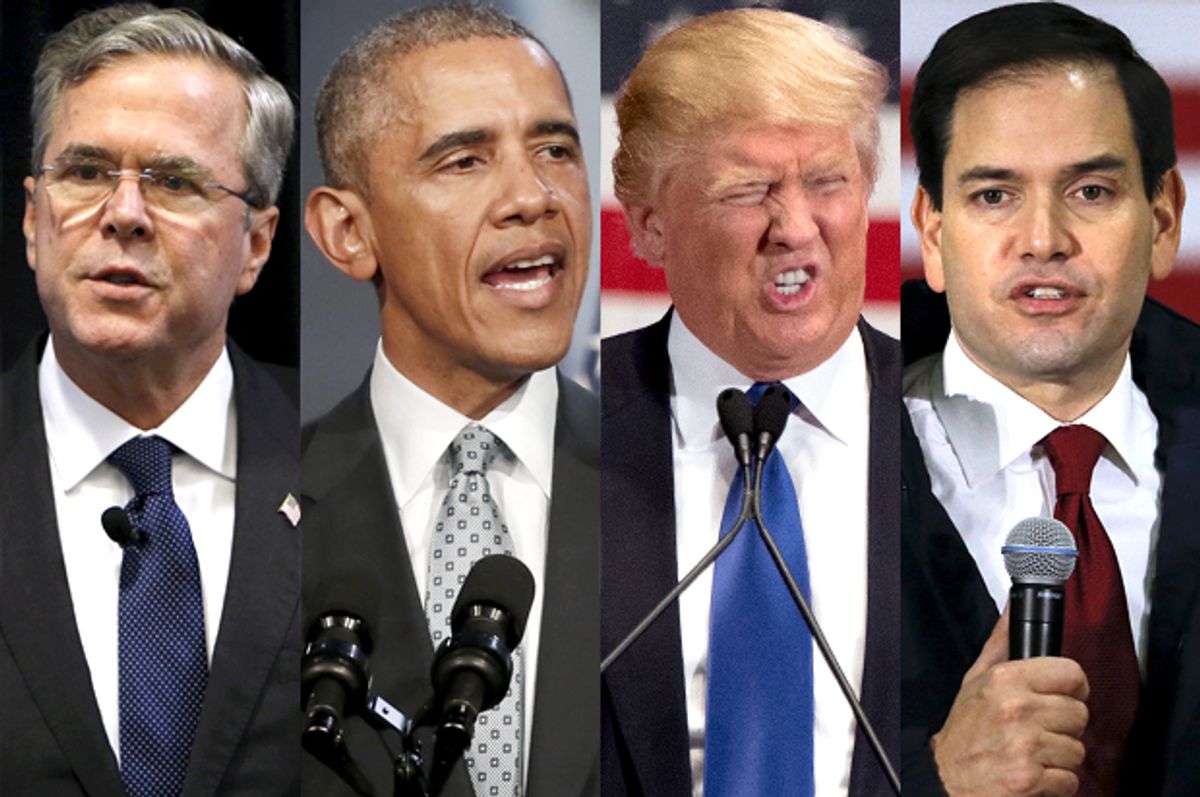 It's become a truism on the right that President Obama is decimating the military. Every single Republican presidential candidate in every single debate – with the lone exception of Rand Paul – has repeated this argument. If you're a GOP primary voter, you likely believe the military-industrial complex is reeling under Obama; that defense spending is at an all-time low; and that countries like China and Russia have surpassed America in military capabilities.

“Barack Obama ... has dramatically destroyed our military,” Ted Cruz recently said. The New Jersey governor, Chris Christie, says “We are not the world's policeman, but we need to stand up and be ready. And the military is not ready. We need to rebuild our military, and this president has let it diminish to a point where tinpot dictators like the mullahs in Iran are taking our Navy ships. It is disgraceful.”

Marco Rubio, the consummate storyteller, thinks Obama just doesn't understand the world or the security threats our country faces. Indeed, according to Rubio, President Obama is “more interested in funding Planned Parenthood than he is in funding the military.” (Side note: The fact-checkers at PBS found that the government spends a 1,000 times more on defense than on Planned Parenthood.)

Jeb Bush, who learned nothing from his brother about the limits of American power, insists Obama is “gutting” the military. “The deployments are too high for the military personnel,” he said without a hint of irony. “We don't have procurement being done for refreshing the equipment. The planes are older than the pilots. We have to eliminate the sequester, rebuild our military in a way that makes it clear that we're back in the game.”

Donald Trump believes our military is a “disaster.” He told a raucous crowd in Alabama last summer that he would be strongest on all things military: “You know the thing I'll be great at that people aren't thinking? And I do very well at it. Military. I am the toughest guy. I will rebuild our military. It will be so strong, and so powerful, and so great. It will be so powerful and so great that we'll never have to use it. Nobody's going to mess with us, folks. Nobody.”

Like so much of what you hear in the Republican bubble, almost none of this is true. Every one of the remarks above imply either that Obama has reduced military spending to historical lows or that he allowed the rest of the world to close the defense gap, both of which are false. The United States still spends more on defense than the next seven or eight countries combined, depending on the metrics you prefer. And it's true that there have been cuts, which are unavoidable when you're trying to end two wars, but those cuts were approved by Republicans and Democrats in Congress – Obama merely signed them into law.

More important, defense spending on weapons programs has remained more or less stable since Obama took office. There is a broader push to alter the size and structure of the military, to make it leaner and more adaptable to modern warfare, but those changes stretch back to the previous administration, whose defense policies each of the GOP candidates praise continuously.

The notion that Obama is destroying the military was dispelled yet again by recent news about the president's about-face on defense spending reductions. The administration's proposed budget for next year will be yet another gift to the military-industrial complex, which continues to make obscenely expensive weapons designed for conflicts we no longer fight. The announcement, a welcomed victory for conservative hawks, comes just a few months after “Obama blasted lawmakers for pumping billions of dollars into weapons the Pentagon hadn't requested.”

For all their rhetoric about fiscal sanity, the Republicans are unwilling to make the cuts necessary to balance the budget. Instead, they demagogue the president, distort the facts and beat the war drums regardless of the realities on the ground. Whether Obama increases or decreases defense spending, then, the fear-mongering will continue. And the war machine rolls on, as it always does under both Republican and Democratic administrations. The only difference is that Republicans refuse to admit this. Pretending we're on the verge of annihilation, it turns out, is part of their get-out-the-vote strategy.