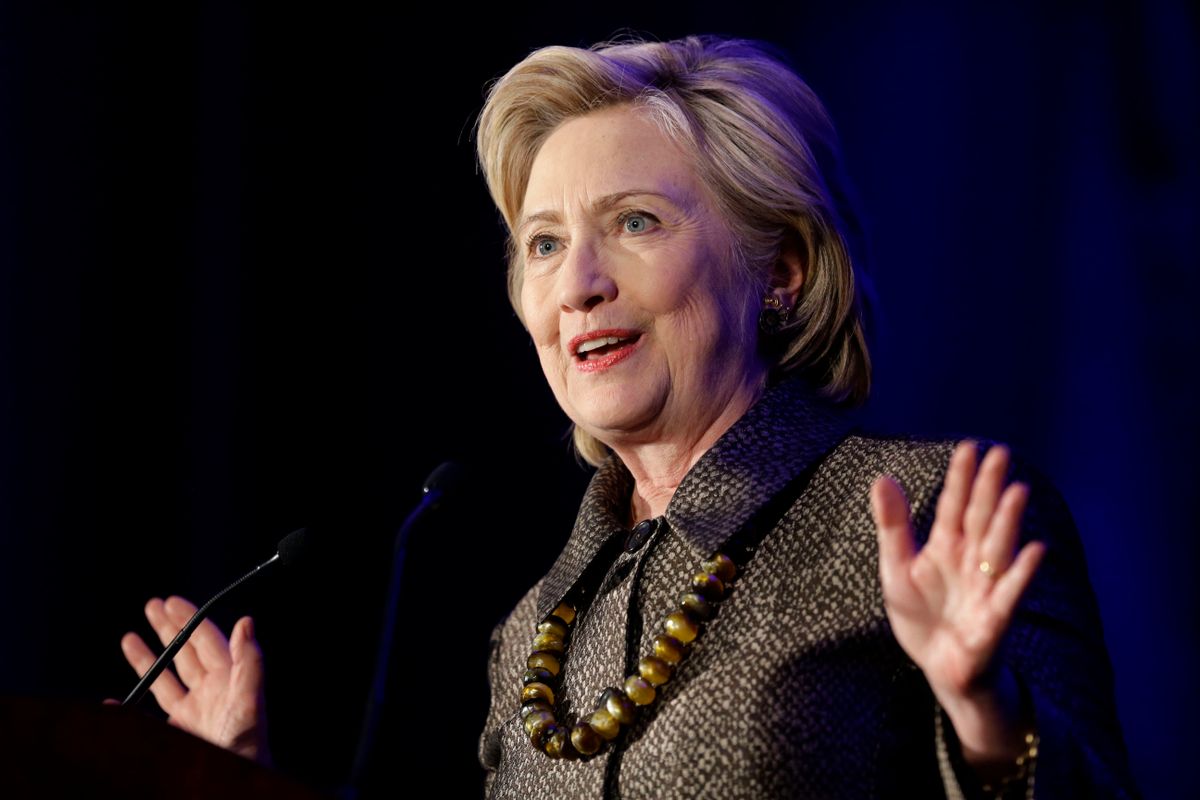 Hillary Clinton's ties to Wall Street have been a continual drag on her campaign. This was always going to be a problem for her in a Democratic nomination race, but it's especially burdensome when her opponent is Bernie Sanders. Sanders's anti-Wall Street credentials are unimpeachable, and no one in American politics is better positioned to challenge their influence than him.

It's no surprise, then, that Clinton has struggled to find the right tone on this issue. At the most recent Democratic presidential town hall, for instance, Clinton was asked by Anderson Cooper if it was a mistake to accept $675,000 in speaking fees from Goldman Sachs. Her answer was, well, awkward:

CLINTON: “Look, I gave speeches to lots of groups. I told them what I thought. I answered questions.”

CLINTON: “Well, I don't know. That's what they offered.”

I'm not sure what the correct response to this question is, but this wasn't it. At a previous debate, when asked about her previous efforts to curb financial corruption, Clinton again dropped the ball. She said she went to Wall Street before the Great Recession and told those crafty bankers to “Cut it out!” and to “Quit engaging in these kinds of speculative behaviors.” Obviously this wasn't a compelling defense of her record.

These kinds of questions aren't going away. If anything, it's going to get worse for Clinton. The calls for her to release the transcripts of her paid speeches at Goldman Sachs are getting louder every day. A new report in Politico, with several quotes from Goldman employees who attended Clinton's speeches, will likely increase the pressure.

According to people who heard Clinton's remarks, “she spoke glowingly of the work the bank was doing raising capital and helping create jobs...She spent no time criticizing Goldman or Wall Street more broadly for its role in the 2008 financial crisis.” On the one hand, it's understandable that Clinton wouldn't condemn the people paying her several hundred thousand dollars to speak. However, the report sharply contradicts her “Cut it out” narrative, which was already unpersuasive.

“It was pretty glowing about us,” said another attendee. “It's so far from what she sounds like as a candidate now. It was like a rah-rah speech. She sounded more like a Goldman Sachs managing director.” However accurate these accounts are, it's a very bad look for Clinton. The discourse on the Left right now is focused on greed and inequality and corruption – reports like this can only undermine Clinton's campaign.

Clinton's current dilemma is whether to release the transcripts or not. As Buzzfeed reported over the weekend, she owns the exclusive rights to the content of her speeches, and so the decision is hers and hers alone. This is really a lose-lose proposition for Clinton. If she does release the transcripts, she'll have to defend everything she said, and that's not a position she wants to be in. As another attendee of one of the speeches put it, “It would bury her against Sanders. It really makes her look like an ally of the firm.”

If she sits on the transcripts, the most likely move, the speculation and pressure will only mount. A Democrat close to the campaign told Politico that “If it were up to me I'd just say go ahead and release them and deal with it. But I can understand why they don't want to because anything can be taken out of context and blown up.” Clinton pushed back on ABC's “This Week,” saying “Let everybody who's ever given a speech to any private group under any circumstances release them. We'll all release them at the same time. I have never, ever been influenced in a view or a vote by anyone who has given me any kind of funding.”

This may be the only angle Clinton can take on this story, but it won't make it go away. Goldman Sachs isn't a typical “private group” and the notion that she's never been influenced by the people giving her millions of dollars isn't plausible. In any other election cycle, Clinton could easily survive this story – and she still can, of course. But 2016 is the year of the populist, and this will plague her campaign for several months.