Ted Cruz is for forced childbirth but opposed to drafting women. The common theme is keeping women in the home 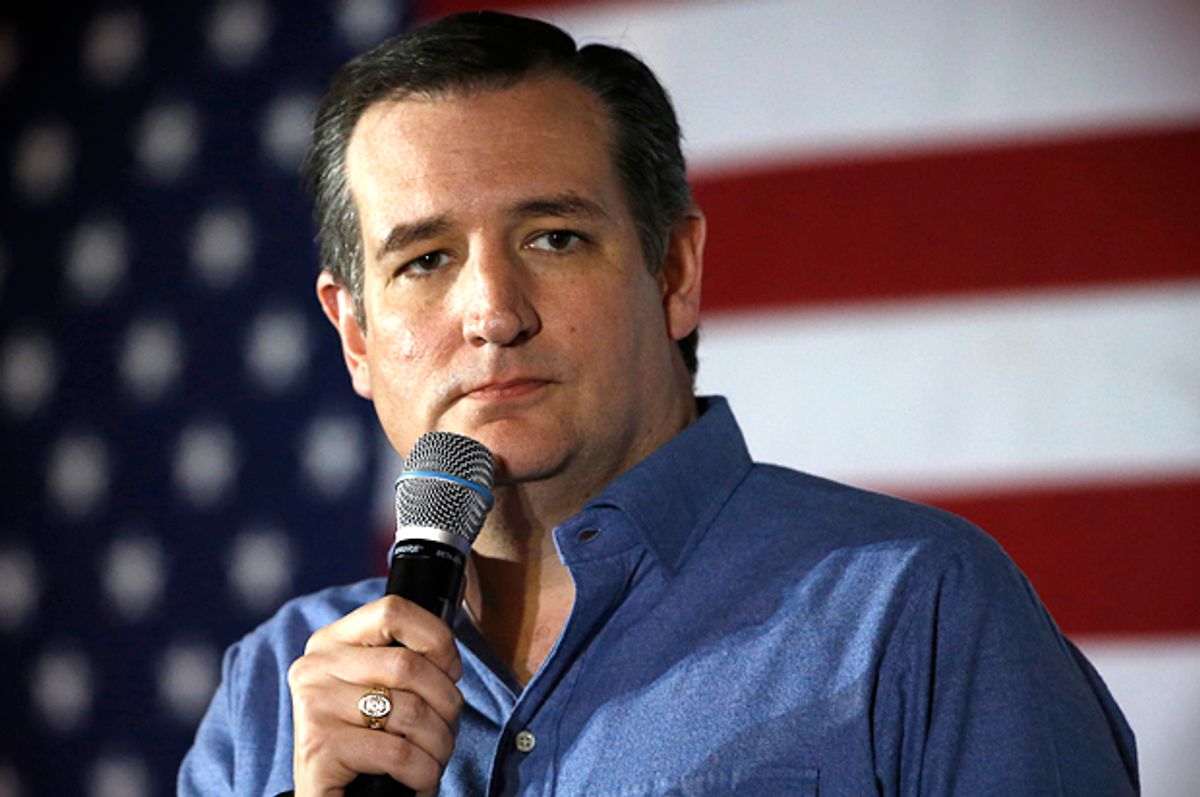 The last military draft ended 43 years ago — Marco Rubio wasn't quite 2 years old at the time— but the issue has suddenly surged to the forefront on the 2016 campaign on the back of a couple of House Republicans drafting a bill that would require women to sign up for the Selective Service alongside men.

During Saturday's debate, Jeb Bush, Marco Rubio, and Chris Christie all, in a moment of startling common sense, pointed out that since women are now permitted to serve in combat positions, there's no reason not to make the Selective Service more egalitarian. Hillary Clinton didn't commit either way during a recent town hall, but that's because she was more focused on reassuring voters that no one, male or female, is getting drafted.

The whole thing is a testament to the power of symbolic politics over boring real world policy stuff, because, as all the above candidates made super-clear, the draft isn't coming back. The issue is only being brought up as a vehicle to discuss, however obliquely, women's changing roles and the inevitable anxiety that brings up. (You'd think having a female candidate for president would have us covered on that front.) Which is the likely reason why Cruz has decided to make a big smelly deal out of this whole thing.

"Are you guys nuts?" he said  at a recent New Hampshire campaign event.

"I'm the father of two little girls. I love those girls with all my heart," he continued, working some sentimentality into it. "They are capable of doing anything in their hearts' desire, but the idea that their government would forcibly put them in the foxhole with a 220-pound psychopath trying to kill them, doesn't make any sense at all."

Your sons, however? I guess they are just psychopath target practice. Or would be, if there was a draft. Which there is not going to be.

Cruz's supposed concern for the freedom and safety of young women is hard to swallow, since he does support another kind of draft: Forced childbirth. Your girls won't have to go to imaginary war in 'Nam on his watch, but he, like every other Republican in the race, supports policies that will, in the real world, strong-arm the unwilling into the maternity ward.

Cruz's support for forced childbirth goes beyond just his well-documented support for banning abortion, though that alone shows he has no problem forcing women to put themselves in danger to suit his political ends. Cruz has gone along with the larger anti-choice movement in attacking women's ability to prevent pregnancy in the first place. He demanded that we shut down the government rather than let Planned Parenthood provide low cost contraception, has advocated for giving your employer veto power over what kind of contraception your insurance can cover, advocated for an employer's right to fire you for using birth control, and has heavily pushed the idea that using pills to suppress ovulation is the equivalent of "abortion."

When challenged about his lengthy career in trying to take away contraception access, Cruz deflected by saying that he's OK with condoms (which he calls "rubbers"), i.e. a male-controlled contraception method that insurance doesn't cover and which has a typical use failure rate of 18 percent, twice that of the pill and over 18 times higher than that of the IUD. Not the greatest evidence that he's for women having control over their own bodies.

Of course, if you ask anti-choicers these days why they're for forced childbirth, the claim is that they are just trying to protect women. It's standard now on in religious right circles to argue that if women are allowed easy access to abortion or contraception, they will suffer a myriad of consequences from depression to breast cancer  to dying alone with your cats because no one will love you. (That last one is implied mostly, through hints that women who prevent or abort pregnancy are sluts that no man will marry.) It's all a lie, of course, but that never stops anyone on the right these days.

Cruz himself is a fan of the forced-childbirth-is-good-for-women argument, claiming that a Democratic bill mean to protect women's access to abortion is a "war on women." In reality, you're 14 times likelier to die from childbirth than abortion and while there's no scientific evidence linking abortion to depression, nearly 1 in 7 women who give birth experience postpartum depression. And that's not even getting into the economic and social damage that having children against your will can bring upon you.

None of which is to say that women shouldn't be able to have children, if they want. But it's risky and nothing about forcing the unwilling into taking unnecessary risks can be construed as "protecting" women.

Cruz's opposition to the military draft but support for the childbirth draft does show what conservatives mean when they claim they want to "protect" women, however. It's not actually about shielding women from harm. It's about enforcing rigid gender roles that hold that a woman's place is in the home. (Not that all mothers are stuck at home, but it's a lot easier to combine motherhood and a life in the working world if you can choose when you have babies.)

There's nothing new about this rhetoric. Cruz is dipping into centuries of rhetoric where forcing women into a second class status is justified as "protecting" them. Even the vote was denied to women under the guise of "protecting" them. Considering that there's no real chance of the draft being reinstated any time soon, the only reason for Cruz to hit this issue so hard is that it's a way to signal support for traditional gender roles without saying anything overtly sexist. Cruz's angle in this tight primary race is to hold himself out as the candidate most friendly to the religious right, which is a stand-in for the most opposed to women's and gay rights, and so it's no surprise that he's pouncing on this issue as yet another way to signal to voters that he's the most hostile to women's equality.