Bernie Sanders shifts to face black voters with a crucial nod from Ta-Nehisi Coates and a one-on-one with Rev. Al Sharpton 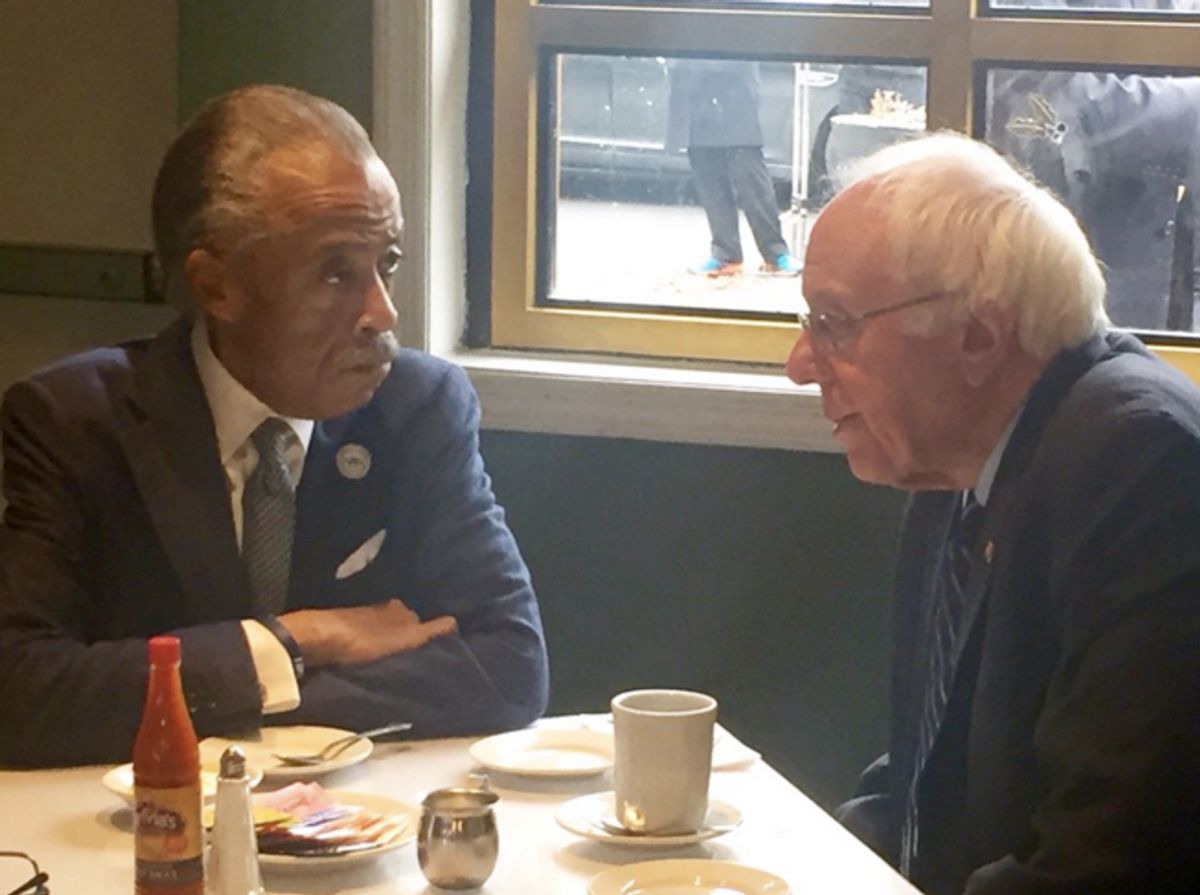 Not resting on his recent success, Bernie Sanders rushed to New York City after his landslide victory in the New Hampshire primary to meet with Rev. Al Sharpton in an effort to shore up his support with African-American voters ahead of the Nevada caucus and South Carolina primary later this month  -- with an endorsement from The Atlantic's Ta-Nehisi Coates to boot.

The famed Sylvia's in Harlem where Sharpton took both Barack Obama and Bill O'Reilly was the meeting spot for Wednesday's 10am sit-down between the MSNBC host and the Democratic presidential candidate. The meeting, just blocks away from the Clinton Foundation offices, was arranged at Sanders’ request, according to The Washington Post.

The meeting appeared to be short as Sharpton tweeted around 10:30am that he was “walking Senator Sanders to his car after our meeting at Sylvia’s." Sanders also plans to hit up "The View" and “Late Show With Stephen Colbert" as part of his post-New Hampshire victory lap.

“Our votes must be earned, none of us can be kingpins,” Sharpton said after the meeting, according to WCBS 880.

For Sanders, who beat rival Hillary Clinton by a whopping 22 percentage points in New Hampshire (the largest margin of victory in a primary election in history), his campaign must now pivot from the virtually all-white New England state to the more diverse voters of Nevada and South Carolina. Non-Hispanic whites comprise just 64 percent of the population in South Carolina and only 51.5 percent of the population in Nevada. Black voters are key in both states, as Hispanic voters only account for about half of Nevada's non-white electorate while African-Americans make up a majority of the Democratic electorate in South Carolina. Voters in both Iowa and New Hampshire are more than 90 percent white.

"It will be very difficult, if not impossible, for a Democrat to win the nomination without strong levels of support among African American and Hispanic voters," Clinton campaign manager Robby Mook said in a memo sent to reporters shortly after polls closed in New Hampshire.

After being dogged early on during his campaign by complaints that he failed to adequately address the Black Lives Matter movement, Sanders hired an African-American activist to serve as a senior campaign spokesperson and added more explicit references to police brutality and racism in the criminal justice system to his stump speech, decoupling the message from his larger theme of income inequality.

On Wednesday, Sanders also grabbed another key non-endorsement from a prominent African-American when The Atlantic's Ta-Nehisi Coates told "Democracy Now" that he was surprised but excited by Sanders' success and planned to vote for the Vermont Independent.

To Coates' point, the notion of a Clinton firewall of black voters in the south was again been questioned in a new essay by Michelle Alexander, author of The New Jim Crow.

"Bill Clinton presided over the largest increase in federal and state prison inmates of any president in American history," Alexander writes in a "Nation" article titled, "Why Hillary Clinton Doesn’t Deserve the Black Vote," pillorying the Clinton's actual, not perceived, record with African-Americans:

Despite claims that radical changes in crime and welfare policy were driven by a desire to end big government and save taxpayer dollars, the reality is that the Clinton administration didn’t reduce the amount of money devoted to the management of the urban poor; it changed what the funds would be used for. Billions of dollars were slashed from public-housing and child-welfare budgets and transferred to the mass-incarceration machine.

To be fair, the Clintons now feel bad about how their politics and policies have worked out for black people. Bill says that he “overshot the mark” with his crime policies; and Hillary has put forth a plan to ban racial profiling, eliminate the sentencing disparities between crack and cocaine, and abolish private prisons, among other measures.

But what about a larger agenda that would not just reverse some of the policies adopted during the Clinton era, but would rebuild the communities decimated by them? If you listen closely here, you’ll notice that Hillary Clinton is still singing the same old tune in a slightly different key. She is arguing that we ought not be seduced by Bernie’s rhetoric because we must be “pragmatic,” “face political realities,” and not get tempted to believe that we can fight for economic justice and win. When politicians start telling you that it is “unrealistic” to support candidates who want to build a movement for greater equality, fair wages, universal healthcare, and an end to corporate control of our political system, it’s probably best to leave the room.

This is not an endorsement for Bernie Sanders, who after all voted for the 1994 crime bill.

Although there hasn't been any polling since January, Clinton still has longstanding support among black voters in the Palmetto State, which holds its primary Feb. 20. It remains to be seen if Sanders' inroads with prominent black leaders will result in increased support from black voters.

Watch Coates explain why he supports Sanders over Clinton, via Democracy Now: