Donald Trump piles on the B.S.: During New Hampshire victory speech, all he does is double down on extremist nonsense 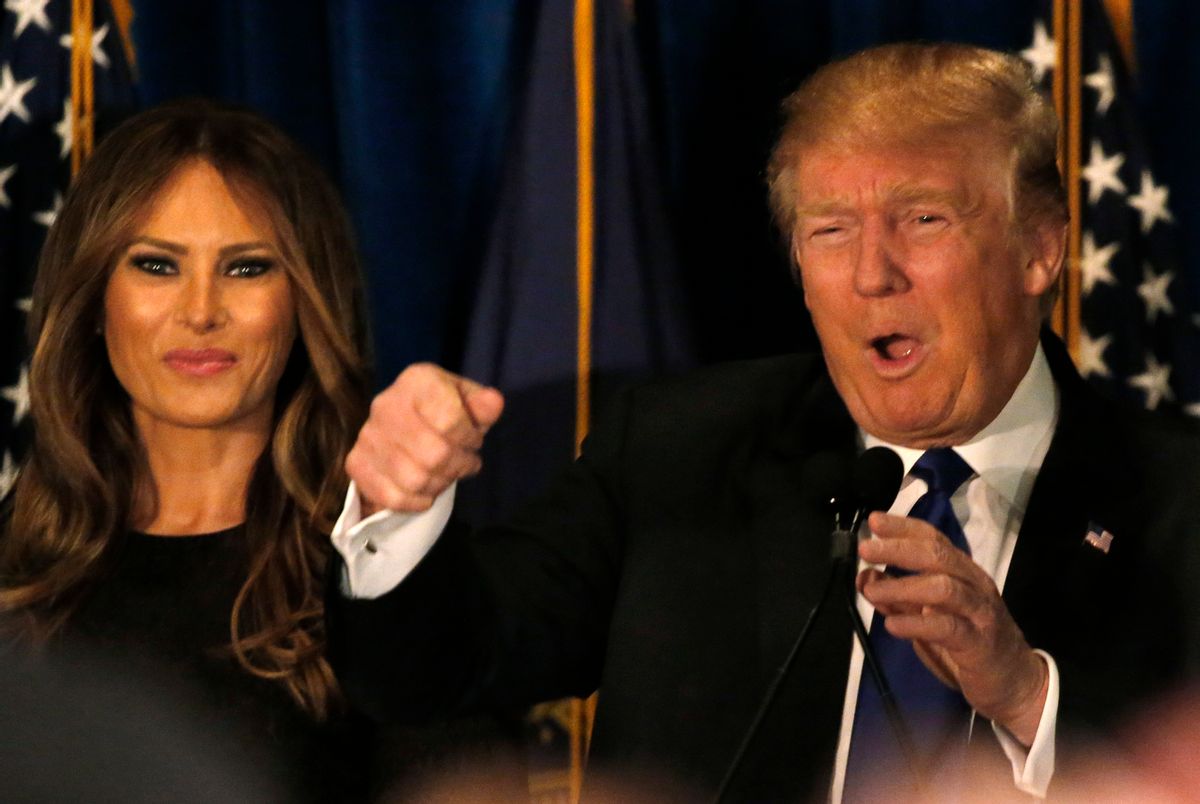 A triumphant Donald Trump entered the stage at his New Hampshire primary victory rally to the sounds of "Revolution" by the Beatles, positively bursting with joy that the universe had righted itself and his singular excellence, an excellence that is greater than the excellence of all excellent people who came before him (though he is grateful for all their hard work), has finally been recognized.

"Do we have ground game?" he crowed to the ecstatic crowd. "We learned a lot about ground games in one week," he added, a bit of snark thrown to the mainstream press that has long been expecting/hoping that Trump's poll numbers would collapse in the face of more seasoned campaigns putting the baby-kissing, hand-shaking elbow grease.

A lot of corners of the media are still reeling from the shock that a clown like Trump can win anything, much less a prominent Republican primary. The Huffington Post's front page was bristling with outrage. But the remarkable thing about Trump's speech is it's not actually that different from boilerplate Republican nonsense: Claiming that foreign policy is mostly about belligerence, demanding an end to Obamacare, accusing Democrats of wanting to give away free stuff, pandering to gun nuts, dark suggestions that Obama is lying about the economic turnaround, taking a swipe at Common Core, and implying that foreigners are sneaking over the Mexican border to kill us all with terrorism and heroin.

The main difference is that Trump is just more, well let's say, boisterous about it.

"I’m going to be the greatest jobs president that God ever created," he bellowed, before going on to declare that the media is lying about declining unemployment and that it could be as high as 42 percent. The gist of the claim— that Obama and the media are in cahoots to hide the truth about the economy, but your noble Republican candidate will fix it all — is no different from what other GOP candidates are saying. Trump's just abandoned the pretense of making his arguments sound plausible at all.

On the drug addiction issue that's so prominent in New Hampshire, Trump promised to fix it all by blaming his favorite scapegoat, Mexico. "We’re going to end it at the southern border," he declared, suggesting the epidemic is mostly due to "cheap" heroin.

On guns, Trump reached for a common talking point among Republicans, which is that more guns will actually reduce gun violence. He used the Paris attacks, which happened in a city with strict gun control, as an example. Calling the terrorists who shot up the Bataclan "these animals," he said, "If there were bullets going in the other direction, believe me, it would be a whole different story."

This notion, that the best way to prevent gun violence is to give every drunk hipster at a rock show a fully loaded weapon, is hardly unique to Trump, even if he uses more colorful language to express it.

If you want to know why Trump is doing so well with Republican voters, this is the answer. He's not, despite mainstream media narratives suggesting otherwise, all that different from other Republicans. He just heaves bullshit with a bigger shovel.