The science of air guitar and car karaoke: How music teaches our brains to imagine what’s coming next

Salon speaks to a cognitive scientist about neuroscience research, and music as a universal human activity 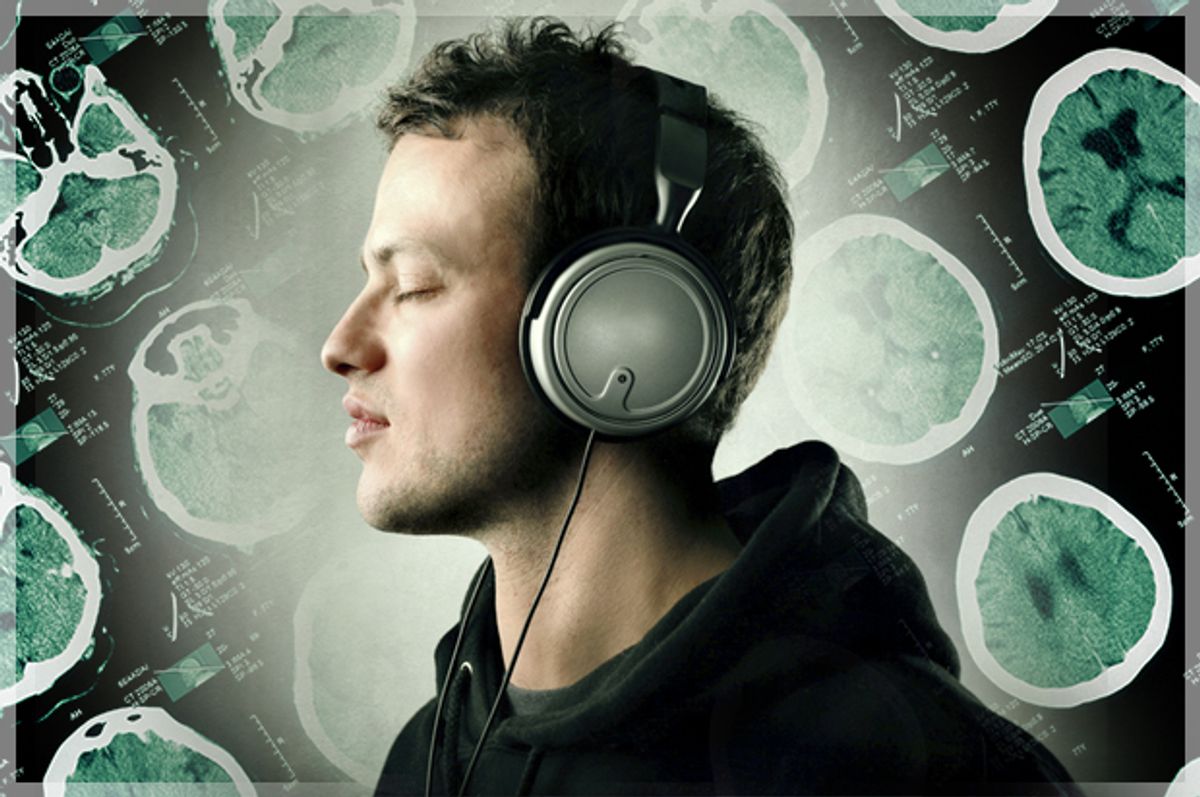 What part of the brain responds to music? Neuroscientists have been looking for this zealously for years, and their efforts have taken at least one step forward. Brain scientists at the Massachusetts Institute of Technology have gotten close to what the New York Times has called, in a new story on the research, “The Music Channel in the Brain” and the brain’s “music room.”

One of the things the research showed was the connection between music and speech. “Importantly,” Natalie Angier wrote, “the M.I.T. team demonstrated that the speech and music circuits are in different parts of the brain’s sprawling auditory cortex, where all sound signals are interpreted, and that each is largely deaf to the other’s sonic cues, although there is some overlap when it comes to responding to songs with lyrics.” Music, then, is not just a dressed-up version of language.

And music, the research demonstrates, is not just what scientists call “auditory cheesecake” -- a sort of extra element that engages various other parts of the brain -- but is central to some of it. The article continues: “When a musical passage is played, a distinct set of neurons tucked away inside a furrow of a listener’s auditory cortex will fire in response.”

To understand the research, Salon spoke to Elizabeth Hellmuth Margulis, who directs the Music Cognition Lab at the University of Arkansas. Margulis is also the author of the award-winning book “On Repeat: How Music Plays the Mind.” The interview has been lightly edited for clarity.

What does this research tell us about the brain’s relationship to music?

If you look back over the history of research on music and the brain, when people began to use magnets and peer into the brain they were expecting to find a music center: this region that lights up when you listen to music.

A specific collection of neurons, right?

Right. So if you think of the way neuroimaging studies work, where you’ll have people do something, and this area lights up, and then they do that, and this area lights up … But it turned out that the areas that light up [with music] were so widely cast across all of these brain regions. This is something people ran with and did all kinds of interesting research about: Maybe part of what makes music training so helpful for other kinds of training – why does it help people read earlier, why does it help people do math better – maybe it brings all of these different areas together, helps them talk to each other and work together.

And does this change that picture at all?

No, that’s still certainly the case -- that all these things are working together. But what’s new is they’re finding that if they use the same fMRI, but use a new type of analysis to the data – to try to get underneath, to get a finer resolution than an fMRI can afford… When they use this technique, they can say, “There do seem to be these special kind of circuits that are responding [to music] preferentially, selectively, over these other sounds.”

So there is a specific “music room” in the brain, where music is heard?

I don’t know if the room metaphor is the ideal metaphor. What they’re uncovering is not the kind of thing you can see in the same way [as an fMRI] – they’re fine areas. But what it is suggesting is that there is circuitry in there whose job is to respond to music – and it does the over and above ordinary daily sounds, and over and above speech.

Particularly the one contrasting it to speech is important, because there’s this whole debate about how these capacities developed over the course of evolution.

Right, so they’re interested in music’s relationship to language. And we think that music came first, is that what research has shown?

No one knows that – people have various intuitions or research that supports one case or the other. What people are really curious about is whether some kind of musical capacity is innate… Are our brains “musicing” brains? Or does the phenomenon of music simply piggyback on all these other phenomena that evolved for all these other purposes? Perhaps music-making is not this fundamental element of what it is to be human. That’s where the debate is – an unresolved debate.

And this new research pushes us further into seeing music as central to human history and prehistory?

Yes – and I think what they’ll try to do next is say, OK, it could be that you develop this circuitry because you are exposed to music so much. The same way if you play chess a lot, or drink a lot of craft beer, you might develop some circuitry that’s really awesome at distinguishing between types of craft beer. But it doesn’t mean you’re born a craft beer connoisseur.

What does your own research show you about how far the capacity and interest in music goes back?

It’s really hard to speak to that big question. Ethnomusicologists have observed that music is a human cultural universal. You go around the world, and everyone you find seems to be making music. Just because it’s universal doesn’t necessarily mean it’s innate, but it’s certainly intriguing. And it’s consistent with a case for innateness.

And then in my own research I’ve been interested in looking at a characteristic that seems to be universal in all of these cultures as well: You can go back and hear a song again, and hear it again. Or within the song, you get a theme that comes back, or some underlying beats that continues through the course of the song. It’s something that seems really special in music, and really widespread in music. So I’ve been trying to understand what that’s doing, what kind of experience that makes possible.

You’d get that in rock and pop music – a repeated chorus – and in folk music too. In hip-hop, repeated beats. In minimalism, repeated cells or motifs. Classical too will repeat themes.

And not only – but regardless what's going on inside the music, the fact that we can go back and listen to the same pieces and with recording technology listening to the exact same sequences of sound – that’s all intriguing. Part of what that’s doing is pushing us into a special relationship with musical sound, where we’re really imagining what’s coming next, in a way that feels like we’re participating. So you see people doing air guitar, or singing along in their car … All of that is really influenced by the degree of repetition.

And the research shows that lyrics that are sung and words that are spoken are received by different parts of the brain? Are there two different places where the brain takes in words?

That’s the thing – there’s an incredible amount of overlap in the way they’re being processed. But there are also different areas that come online when things are being perceived as music. Not necessarily things specific to music – but areas that become active when you’re listening to music rather than when you listen to speech.

It sounds like neuroscience took us forward in understanding how music connects to the brain, and there’s still a long way to go.

That’s exactly right. And the methodology they used allows you to look at imaging data with a finer lens. It’s going to have wider implications than music research.