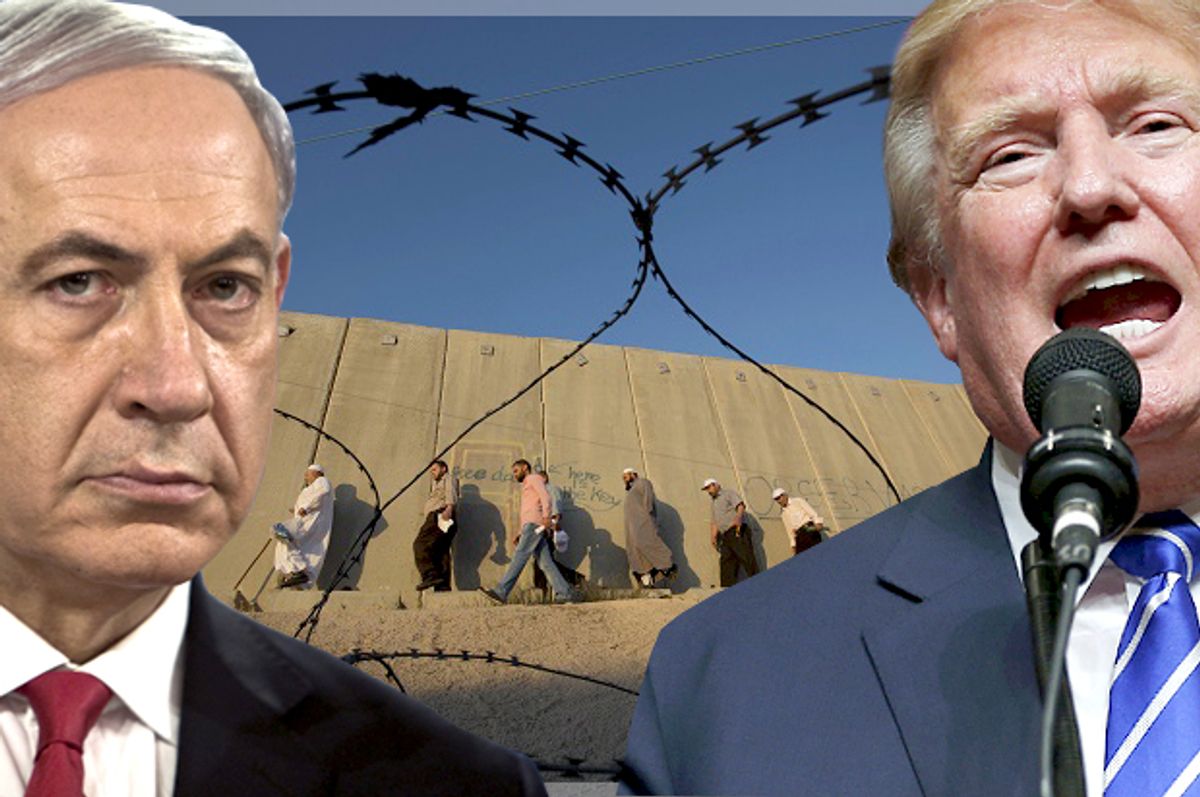 "At the end, in the state of Israel, as I see it, there will be a fence that spans it all," Netanyahu said at Israel's border with Jordan. "I'll be told, 'this is what you want, to protect the villa?' The answer is yes. Will we surround all of the State of Israel with fences and barriers? The answer is yes. In the area that we live in, we must defend ourselves against the wild beasts."

Far-right Republican presidential candidate Donald Trump, who has widely been described as a fascist, has proposed the same in the U.S. Trump, who characterizes Mexicans as rapists and criminals, wants to build a colossal wall on the southern border with Mexico, in order to keep refugees and immigrants out.

Right-wing websites and supporters of Trump immediately made the connection.

In a piece titled "After What Israel's Benjamin Netanyahu Just Announced, TRUMP IS SMILING!", conservative website The Political Insider wrote, "Israel's Prime Minister Benjamin Netanyahu not only approves of Trump’s wall plan, he's having his country build one of their own! The plan is to build a fence around the entire state of Israel to keep out the endless flood of Islamic terrorists. Netanyahu referred to the Muslims as 'wild beasts' who must be contained."

Far-right website Breitbart, which is overwhelmingly supportive of Trump (Breitbart staffers believe Trump has given the site money for favorable coverage), published an article titled "Netanyahu Goes Full Trump: Surround Israel With Barrier 'To Defend Ourselves Against Wild Beasts.'" In the piece, Breitbart's Jerusalem bureau chief intentionally and favorably compared the extreme right-wing presidential candidate to the Israeli prime minister.

Conservative website Western Journalism likewise noted that "another head of state appears to be taking a page out of the Trump playbook."

Progressive critics took to Twitter to blast Trump and Netanyahu for their shared "racist demagoguery."

Palestinian chief negotiator Saeb Erekat compared Netanyahu's rhetoric to that of 20th-century colonial apartheid regimes. Netanyahu's statement was "the same as those of the heads of apartheid in South Africa" said Erakat, who is the general secretary of the Palestine Liberation Organization.

Netanyahu is not the only prominent Israeli politician to have dehumanized Arabs as animals. Far-right member of Knesset (Israel's parliament) and Deputy Minister of Defense Eli Ben-Dahan insisted in a 2013 radio interview that Palestinians "are like animals; they aren't human."

The walls Netanyahu has proposed are by no means unheard of in Israeli politics. Israel has in fact already constructed a separation wall in the West Bank, Palestinian territory that has been illegally militarily occupied by the Israeli government since 1967.

The International Court of Justice ruled 14-to-one in 2004 that the barrier "and its associated régime are contrary to international law." The U.N. General Assembly also overwhelmingly voted in favor of a resolution that condemned Israel's illegal separation barrier in 2004.

Noting that close to 90 percent of the wall is being built inside the illegally Israeli-occupied West Bank, Amnesty International argues the barrier was built for political, not security, purposes and "violates Israel's obligations under international law." The International Committee of the Red Cross says the same.

Despite its illegality, Trump has previously cited Israel's separation wall in order to justify his proposal to ban Muslims from the U.S.

Critics have described Israel's already existing barrier as an "apartheid wall." The Palestinian-Israeli activist group Stop the Wall, which also calls itself the Palestinian Grassroots Anti-Apartheid Wall Campaign, says it "considers the Wall as an integral project of Israel's occupation, colonialism and apartheid and hence understands the struggle against the Wall as part of the overall effort of the Palestinian people to achieve self-determination, equality and the return of the refugees."

Prime Minister Netanyahu has pledged to seal any gaps in this illegal wall, while building more.