The Kochs' plot against America: How the billionaire industrialists are systematically dismantling American democratic ideals

As Jane Mayer reveals, billions are being spent to reeducate the public. We must mobilize now before it's too late 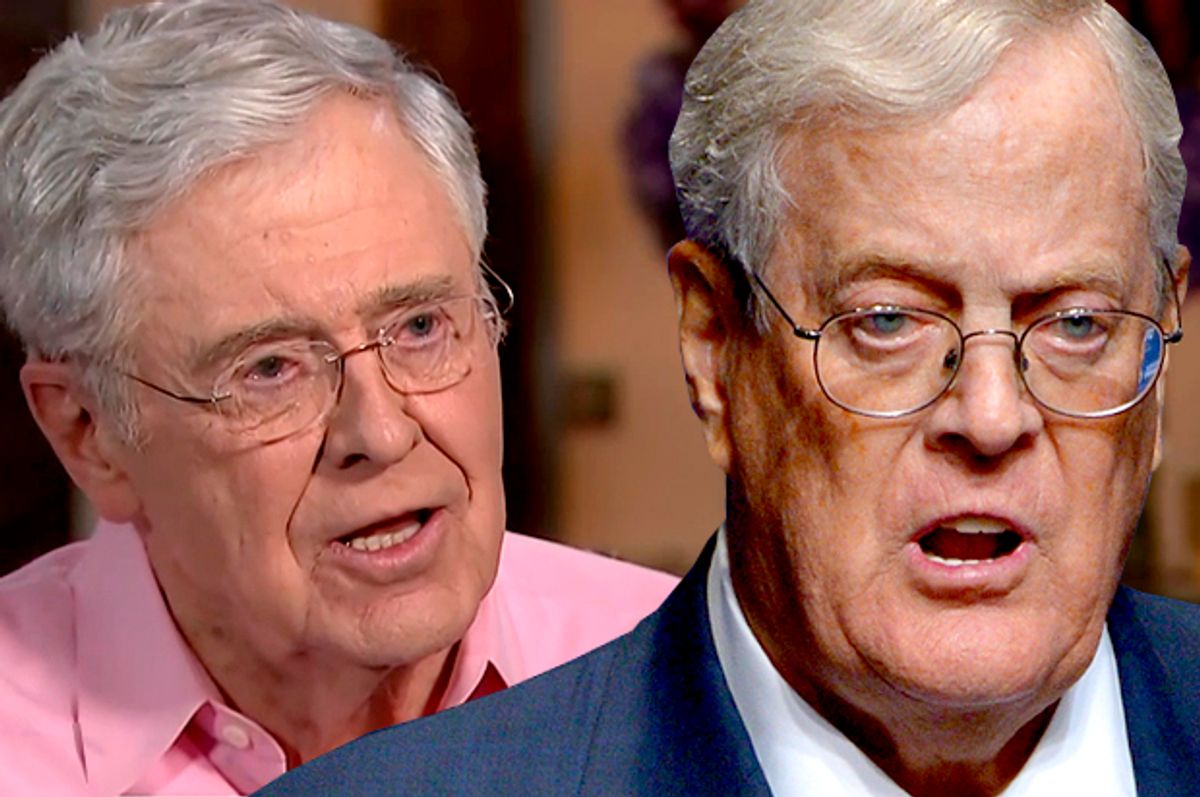 Gather round for the word of the day: metanarrative. Definitions vary but let’s say it’s one big narrative that connects the meaning of events to a belief thought to be an essential truth, the storytelling equivalent of the unified field theory in physics.

Now use it to define what’s being done to America today — our Big Story. Journalist and activist Naomi Klein did just that a couple of weeks ago when she and I talked at Finger Lakes Community College in upstate New York about the Koch brothers’ resistance to the reality of climate change.

“…The Charles Koch metanarrative — and he’s said it explicitly — is that he is challenging collectivism, he is challenging the idea that when people get together they can do good,” she said. “And he is putting forward the worldview that we’re all very familiar with that if you free the individual to pursue their self-interest that will actually benefit the majority. So you need to attack everything that is collective, whether it’s labor rights or whether it’s public health care or whether it’s regulatory action. All of this falls under the metanarrative of an attack on collectivism.”

In other words, Koch and his brother David and the extraordinary machine they have built in cahoots with fellow billionaires and others, have spent hundreds and hundreds of millions to get their way — “the great wealth grab” in the words of Richard Eskow — all part of one long story told in pursuit of a specific end: to make the needs of the very, very few our nation’s top priority and to thwart or destroy any group effort among the poor and middle class to do or say otherwise.

The Kochs have spun their tale with a singular, laser-like focus, carefully taking their time to make sure they get it right. Jane Mayer, author of Dark Money: The Hidden History of the Billionaires Behind the Rise of the Radical Right, recently wrote in Politico Magazine that

“Charles Koch might claim that his entry into politics is new, but from its secrecy to its methods of courting donors and recruiting students, the blueprint for the vast and powerful Koch donor network that we see today was drafted four decades ago.”

Mayer reviewed papers — including one written by Charles Koch himself — presented at a Koch-sponsored Center for Libertarian Studies conference in 1976 and concludes, “…It’s not hard to recognize the Koch political movement we see today—a vast and complex network of donors, think tanks and academic programs largely cloaked in secrecy and presented as philanthropy, leaving almost no money trail that the public can trace. And it’s these techniques Charles first championed decades ago that helped build his political faction—one so powerful that it turned fringe ideas William F. Buckley once dismissed as ‘Anarcho-Totalitarianism’ into a private political machine that grew to rival the Republican Party itself.”

And so we see their creation of ALEC, the American Legislative Exchange Council posing as a non-profit while entertaining state legislators and plying them with templates for laws that favor restrictions on voter eligibility, public sector unions and the minimum wage while supporting freedom for the gun lobby and deregulation. The Kochs shower cash on candidates and elected officials who do the bidding of the right, fund programs at historically black colleges and universities that preach free-market economics and deregulation, bankroll the Libre Initiative that hands out holiday turkeys and Easter baskets to Latino families while, in its own words, “informing the U.S. Hispanic community about the benefits of a constitutionally limited government, property rights, rule of law, sound money supply and free enterprise through a variety of community events, research and policy initiatives that protect our economic freedom.”

As Naomi Klein said during our conversation, “The Koch brothers set out to change the values, to change the core ideas that people believed in. And there is no progressive equivalent of taking ideas seriously.” She then asked, “So what is the progressive metanarrative? Who funds it? Who is working on changing ideas that can say, ‘Actually, when we pool our resources, when we work together, we can do more and better than when we only act as individuals.’ I don’t think we value that.”

In fact, there is a progressive metanarrative, one that needs to be valued and not obscured by arguments over who is or is not sufficiently progressive or who did what to whom and when. The metanarrative’s lead has been buried in divisiveness, by trolling from every side and by despicable, old-fashioned redbaiting. What’s more, goals and purposes have been diffused with a scattershot approach when we should be vectoring in on what really counts.

The progressive metanarrative is the opposite of the fight against collectivism: it’s the struggle against inequality. The Harvard Gazette reports, “Though the wealthiest 20 percent earned nearly half of all wages in 2014, they have more than 80 percent of the wealth. The wealth of the poorest 20 percent, as measured by net worth, is actually negative. If they sell all they own, they’ll still be in debt.”

Labor organizer and Harvard Kennedy School lecturer Marshall Ganz tells the Gazette, “I think the galloping inequality in this country results from poor political choices. There was nothing inevitable, nothing global. We made a series of political choices… that set us on this path.” He continues, “Inequality, it’s not just about wealth, it’s about power. It isn’t just that somebody has some yachts, it’s the effect on democracy… I think we’re in a really scary place.”

But it’s not a place from which escape is impossible. To make our metanarrative come true, we must embrace both community and government that effectively can protect and provide for all. In a 2014 article at the Ideas.TED website, philosopher T.M. Scanlon wrote,

“No one has reason to accept a scheme of cooperation that places their lives under the control of others, that deprives them of meaningful political participation, that deprives their children of the opportunity to qualify for better jobs, and that deprives them of a share of the wealth they help to produce… The holdings of the rich are not legitimate if they are acquired through competition from which others are excluded, and made possible by laws that are shaped by the rich for the benefit of the rich. In these ways, economic inequality can undermine the conditions of its own legitimacy.”

And so it can, if progressives work together, mobilize, dare to take risks and keep the faith in the face of cynicism and weary resignation. Such a metanarrative could have a different — and happy — ending.