More often than not, Sanders and Clinton agreed on the ends, but not the means in latest debate 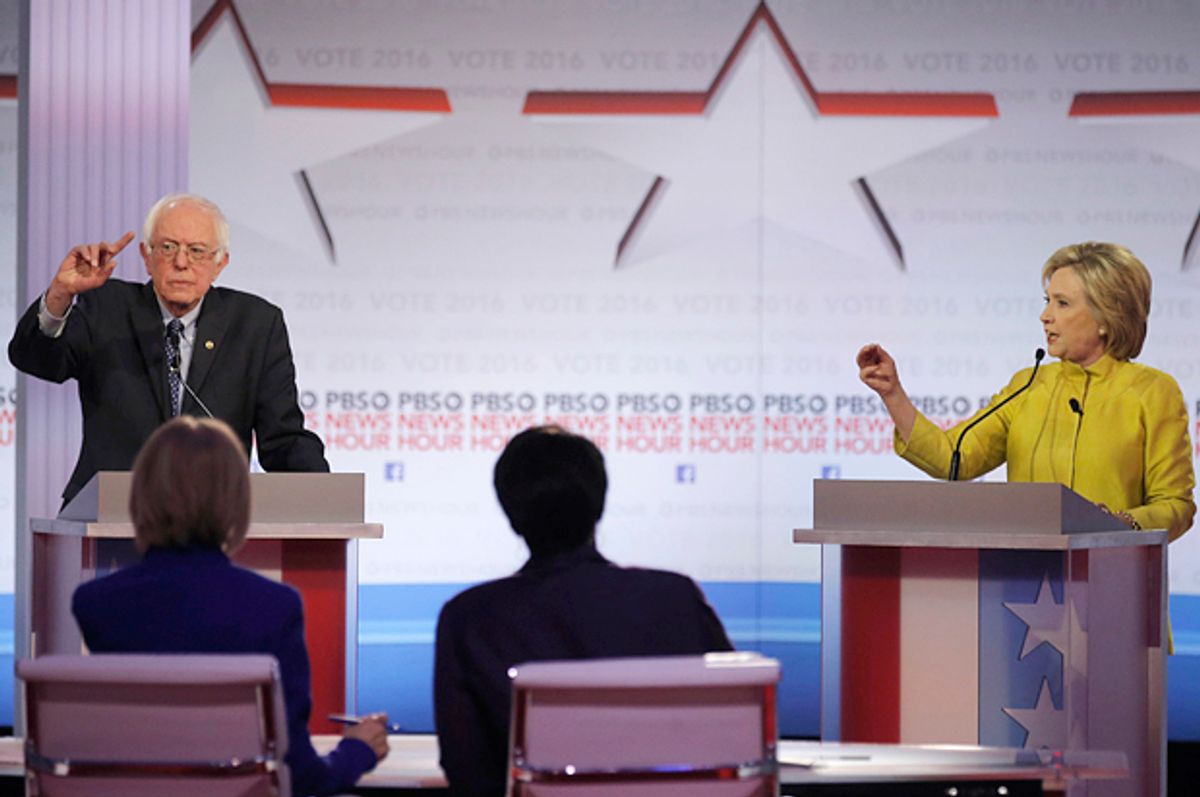 Bernie Sanders and Hillary Clinton had their second one-on-one debate Thursday night, this time in Milwaukee, and their first since the Vermont senator's impressive primary victory in New Hampshire.

PBS did a fine job of hosting and organizing the event; it wasn't the WWE-style spectacle we've seen on some of the cable networks who have hosted previous debates. The questions, in the main, were fair and relevant. And the conversation was mostly cordial, with a few testy exchanges between the candidates on issues like foreign policy.

Nothing revelatory happened this time around. We heard the same talking points from both candidates; the same themes; the same pitches. Criminal justice reform, immigration policy, universal health care, campaign finance reform, political corruption, economic inequality – all of these issues were discussed and, for the most part, there was little space between the candidates. More often than not, Sanders and Clinton agreed on the ends, but not the means. They differed dramatically in terms of their rhetorical style, but substantively there was a lot of overlap.

But there were some obvious exceptions. Clinton, whether it's deliberate or not, is pushing a message of pragmatic incrementalism. Sanders, on the other hand, is calling for a "political revolution," and although it's not quite clear what he means by revolution, at the very least it means he wants to disrupt the status quo and introduce sweeping changes. This contrast was evident early on when health care was being debated.

Both candidates share the goal of universal health care, but they disagreed about the path. Clinton spoke like a seasoned wonk, like someone who's very much of the system and understands how glacially it moves. She said we have to keep the basic infrastructure of ObamaCare because that's what we have now, and because it was nearly impossible to get it in place. Since our present system covers roughly 90 percent of the country, Clinton's argument was that the immediate and practical goal should be to focus on extending coverage to the remaining 10 percent.

Sanders rejected this, saying we need a single-payer system, a Medicaid for all approach. Clinton pounced on Sanders, asking him repeatedly to explain how he'll accomplish that. "I have a plan to move my agenda forward," Clinton said, implying that Sanders didn't. At one point, she told Sanders to "level with the American people" about health care, which was another way of saying he's promising things he can't deliver. Sanders struggled with this, resorting to his talking points about America being the only industrialized country in the world that doesn't guarantee health care for its citizens. This exchange, as much as any tonight, contrasted Clinton's emphasis on the possible with Sanders's emphasis on the desirable.

The most heated part of the debate was the foreign policy segment. I argued recently that Sanders has to exploit Clinton's vulnerabilities on foreign policy, and that's exactly what he did. Clinton is rightly seen as more experienced on foreign policy, but that doesn't tell us anything about her judgment (Dick Cheney, after all, is as experienced as anyone in American politics on this front). Sanders made his usual arguments about Clinton getting the Iraq War wrong. But he went further Thursday night, hammering Clinton on her incessant support for regime change — in Iraq, in Libya, and in Syria. Unlike Clinton, he said, I think "carefully about unintended consequences."

In one of the more interesting moments, Sanders responded to Clinton's reference to Henry Kissinger (a supporter of Clinton) by noting that he was "one of the most destructive secretaries of state" in history. "I'm proud to say," he added, "that Henry Kissinger is not my friend." In addition to being an accused war criminal, Kissinger also typifies the foreign policy establishment; Sanders used this to make the point that he does not represent the Washington consensus, and Clinton does.

After Thursday night, it's apparent that Clinton wants to position herself as the candidate who represents a third Obama term. Time and again she highlighted her support for Obama's policies, and at one point awkwardly accused Sanders of undermining the president's agenda. This may be the wisest strategy for Clinton. However, it confirms the establishment narrative surrounding her campaign. Sanders is positioning himself as the candidate whose ideas represent the future of the Democratic Party, which is a young person's party, a more progressive and populist party. Thursday night he was strongest when talking about the grassroots support for his campaign, about the fact that he doesn't have a super PAC and doesn't rely on contributions from the donor class. This wasn't Bernie's best debate, but he stayed on message — and that's what he needed to do.

Neither candidate "won" the debate. Both Sanders and Clinton spoke to their constituencies in the same ways they have throughout the campaign. There were no obvious gaffes and I doubt the dynamics of the race were impacted one way or the other by what happened on the stage in Milwaukee.