Will anyone challenge John Kasich's jobs claim?: Why his numbers don't add up

Ohio is far from being "one of the fastest growing states in the country." Here's what he gets wrong 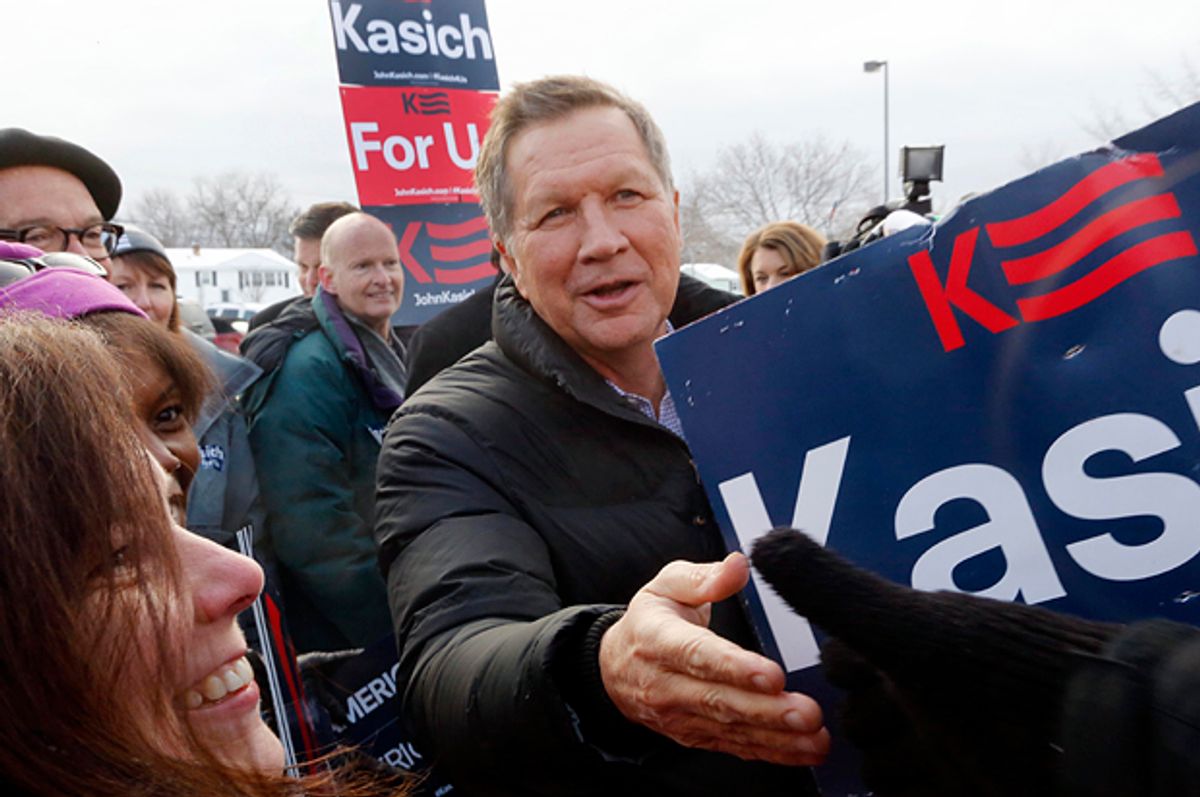 Ohio Gov. John Kasich said something during Saturday’s presidential debate in New Hampshire that he didn’t say in the previous seven Republican debates. “And we’ve grown jobs by 400,000 — that’s one of the fastest growing states in the country,” he told the audience at St. Anselm’s College and an estimated 13.2 million television and online viewers.

The first part of that sentence is true — Ohio has gained more than 400,000 jobs since Kasich took office in January 2011, according to the latest U.S. Bureau of Labor Statistics data. But those same figures don’t support Kasich’s claim that Ohio is a leader in job creation.

In the nearly five years Kasich has been governor, Ohio saw total nonagricultural employment grow only 7.6 percent, compared to the national average of 9.4 percent, ranking it 24th among the 50 states. States growing jobs faster include the four most populous — California, Texas, Florida and New York — as well as states in the New South, Pacific Northwest and three of Ohio’s neighbors: Michigan, Indiana and Kentucky.

Kasich objects to tallying job growth this way because the totals include public-sector employment. Although he didn’t specify it during the debate, the 400,000 jobs Kasich boasted about were all from the private sector. “We are not talking about government-sector jobs,” he told reporters early last year. “You only grow your economy with private-sector jobs.”

That sound bite plays well to the GOP choir on the campaign trail. But counting only workers hired by private business has another benefit: Kasich’s job-creation totals aren’t dragged down by the decline in public-sector employment in Ohio — mostly teachers, other public school employees and municipal, county and township employees — which has shrunk more than 2 percent since Kasich took office.

But while those workers make up a significant portion — nearly one in seven — of the Buckeye State’s total 5.4 million nonfarm jobs, ignoring them doesn’t do much to change Ohio’s standings among the other states. Counting only private-sector jobs moves Ohio up only two places in the rankings —from 24th to 22nd— passing Massachusetts, Delaware and Minnesota. (Ohio would have ranked 21st, but Montana took that spot by leapfrogging from 27th in the nonfarm jobs standings.)

Whichever criteria is used — all nonfarm jobs or private-sector only — Ohio is far from Kasich’s boast of being “one of the fastest growing states in the country.”

Could one of the moderators at Saturday’s debate, sponsored by ABC News, have challenged Kasich’s claim? The information was certainly available.

All of Ohio’s metro newspapers have reported at one time or another that Ohio is lagging behind the nation in job growth. And several nonprofit groups from across the political spectrum, including the liberal-leaning Policy Matters Ohio and conservative Ohio Watchdog, have published in-depth analyses of that fact on their websites.

In addition, a number of newspapers and other publications have cited the work of George Zeller, a Cleveland-based economic researcher who uses a different — and arguably more accurate — method to track job growth.

Most news organizations report monthly job counts that have been “seasonally adjusted” to compensate for cyclical swings, such as the decline in construction work at the onset of winter and layoffs of temporary retail clerks following the holiday shopping season. Without those adjustments, month-to-month comparisons aren’t valid.

Zeller prefers to use unadjusted data to avoid errors inherent in the added layer of statistical manipulation. To get around the problem of seasonal swings, he compares each new monthly job total to the same month in previous years. Applying that yardstick, Ohio’s job growth has trailed the U.S. average for 38 months straight — more than three years, according to the government’s December employment report.

But the debate moderators don’t have to look to Ohio publications to find a red flag concerning Kasich’s job creation claims. The week before the New Hampshire debate, FactCheck.org, the widely read website sponsored by the Annenberg Public Policy Center of the University of Pennsylvania, posted its critique of the previous GOP debate, held in Des Moines, Iowa, on Jan. 28.

As he had in previous debates until New Hampshire, Kasich talked only about Ohio job gains and avoided comparisons to other states, boasting that “we just found out we are up over 400,000 jobs since I took over as governor.” FactCheck.org criticized Kasich for ignoring the fact that Ohio’s “rate of growth is below the national average,” even when counting just private-sector jobs.

Kasich’s new claim that Ohio is “one of the fastest growing states” in job creation has escaped notice so far of the national news media. But why would Kasich gamble by making such a blatantly false statement?

A likely answer is the importance of Tuesday’s primary to his presidential hopes. “If I get smoked in New Hampshire, then you know kind of the ballgame is over,” Kasich said in an interview on WABC Radio, “… because then it becomes very hard to raise money.”

Within hours of the polls closing, it was clear Kasich didn’t get smoked. He scored big, coming in a solid second to Donald Trump and substantially ahead of Texas Sen. Ted Cruz, former Florida Gov. Jeb Bush and Florida Sen. Marco Rubio.

The success of Kasich’s under-the-radar campaign raises a question — the political version of the famous philosophical thought experiment about whether a falling tree make a sound if nobody hears it: If a candidate says something that’s not true, but the national news media doesn’t call him out, does it hurt his chances to be elected?

Hard to see how it could.

A version of this article originally appeared in plunderbund.com

David Knox is a veteran Ohio newspaper reporter and editor, including more than 20 years at the Akron Beacon Journal — the last 10 as the newspaper’s computer-assisted reporting specialist. He can be reached at dknox@paladinreports.com.