The Sanders campaign is flirting with danger: The two big warning signs coming out of last week's debate

His long-shot bid is still cruising. But two recent errors, one stylistic, the other substantive, recommend caution 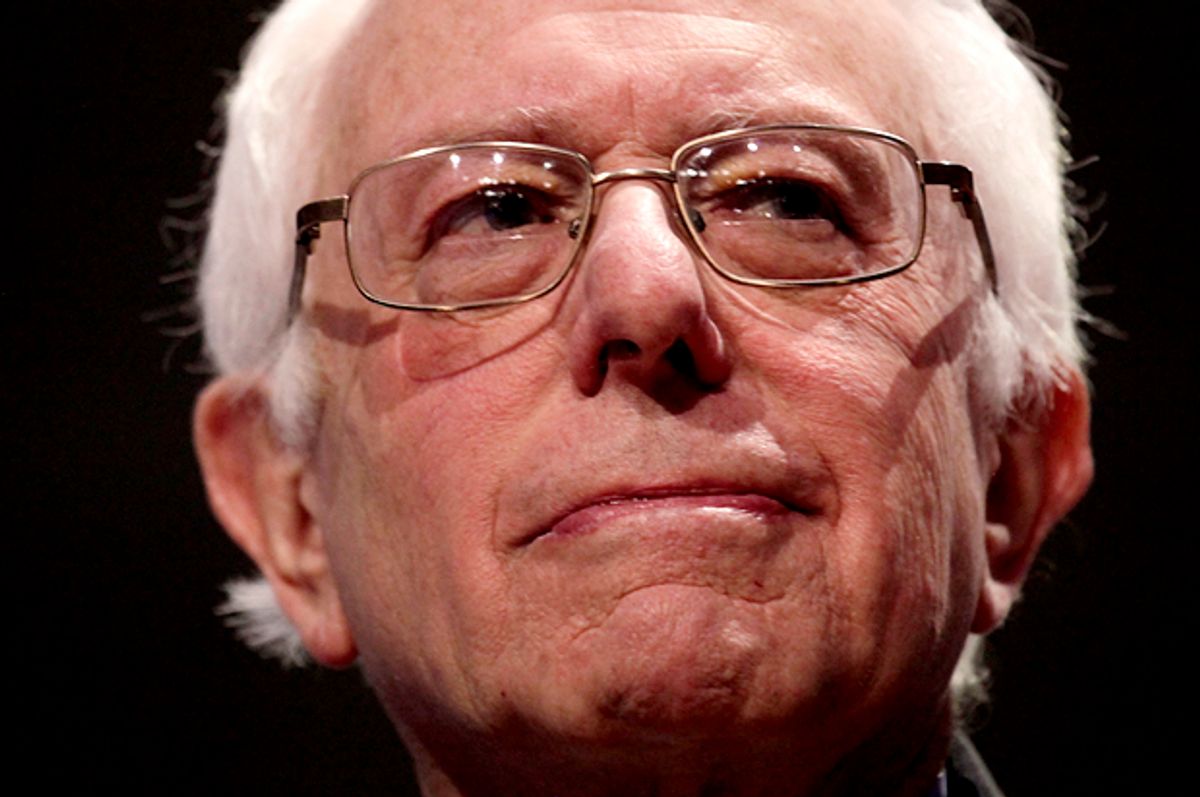 It would be extremely premature to say that the media’s begun to turn against Sen. Bernie Sanders. But coming out of Thursday’s Democratic debate, there were signs that, on both the superficial and the substantive level, the media’s treatment of the Sanders campaign is about to lose some of its (relatively) soft touch.

Let’s start with the superficial, partially because it’ll be easier for the Sanders campaign to dismiss.

During one of the few tense moments of PBS’s generally “chill” debate, Sanders, responding to Clinton’s explanation of how she will use her “political capital” once she is “in the White House,” sniped, “Secretary Clinton, you're not in the White House yet.” The remark inspired some audible expressions of displeasure from the audience, and reminded some media observers of Obama’s “likable enough” moment in 2008.

Sanders partisans will want to dismiss the jibe as a media-manufactured “gaffe” (one devised by The Establishment, in secret consultation with The Clinton Machine, no doubt). Their argument will not be entirely without merit; acting like a jerk and being an effective president are not mutually exclusive. But for a campaign already fending off its opponent’s charges of sexism, it was not a good look.

Regardless of whether it’s “fair,” it’s undeniable that avoiding these kinds of pitfalls is part of running a successful campaign. So it’s worth paying attention when a generally sympathetic columnist expresses displeasure, as was the case with the Guardian’s Lucia Graves. Here’s how she responded to Sanders’ failed zinger:

Clinton could’ve been understandably on edge, as she was fresh off a resounding loss in New Hampshire on Tuesday and an effective tie in Iowa the week before. But it was Sanders who was oddly on the defensive despite what has been momentum in his favor, starting out the night more combative than Clinton and wasting his time on petty one-liners. (When Clinton talked about building political capital when she’s in the White House, for instance, Sanders began a rebuttal with “Secretary Clinton, you’re not in the White House yet.”)

More important than this specific criticism, though, was how it opened up a lane for Graves to be more critical of Sanders in general. Having started off on the wrong foot, Sanders increased the chances of losing whatever benefit of the doubt he had going in. Because while Graves’ piece opened by dinging Sanders for the remark, the heart of the column is a more frontal attack on him as “tone-deaf” and “too quick to anger.”

Sanders has profited from the media’s lack of interest in challenging his self-presentation as a kind of non-politician. He’s similarly benefitted from his mostly-unchallenged self-presentation as a kind of happy warrior — angry and loud, yes, but in a lovably earnest kind of way. The Clinton campaign has desperately tried to get the media to challenge this image. Sanders has to be careful not to do it for them.

That brings us to the more substantive criticism that’s dogged Sanders in the past few days; and it’s one, I’d argue, that is more likely to resonate if the campaign press is already becoming less sympathetic toward Sanders on a personal level. It had to do with one of Sanders’ signature big, bold promises — namely, that he’d all but end mass incarceration before wrapping up his first term:

As Mark Kleiman, Leon Neyfakh, John Pfaff, Chris Hayes, Tim Murphy and German Lopez all noted, this is not simply a very ambitious goal. It is absurd, outlandish, ridiculous, disconnected — you name it. And not for the usual reasons that people say such things about Sanders’ promises, either. Not because it’s hard to imagine, but because it is impossible, full stop.

Here’s Kleiman — a leading expert on mass incarceration and a Clinton supporter — explaining why:

[O]f the 2.3 million people behind bars in this country, fewer than 10% are Federal prisoners. The rest are in state prisons and local jails. If the President were to release all of the Federal prisoners, we would still, as a country, have more prisoners than any other country. So Sen. Sanders was very specifically making a promise he has no way of keeping. Either he knows that or he does not.

A Sanders supporter might conceivably respond that Bernie, as president, would achieve his goal not simply by releasing prisoners, but by creating an economy that disincentivizes criminality by offering people — especially young people — a chance to work. It’s an appealing theory, at least to liberals. The problem, as Lopez explains, is that it misunderstands why we have mass incarceration in the first place:

Sanders's comments … mischaracterize why incarceration rose so much over the past several decades. It wasn't that crime kept increasing, so there were more crimes to lock people up for. Instead, policymakers and law enforcement made a conscious decision to incarcerate more people even as crime fell, because they believed it was the best crime-fighting strategy at a time when crime was unusually high.

In other words, mass incarceration is a conscious policy decision largely separated from crime and the economy. So to really significantly cut incarceration, what needs to be done is to pull back on incredibly harsh prison sentences — including, by the way, for violent offenses.

If someone doesn't get this, he or she won't understand the root of mass incarceration — and will have an incredibly hard time understanding how to fix it.

As much as the idea of a “political revolution” may strain credulity, you could at least imagine how a mass movement might usher in a new Great Society. A liberal Congress is swept into office, one itching to make good on the promises of the new democratic socialist president. It’s extremely unlikely, granted, but at least you can conceive of it. With all due respect to the power of popular democracy, though, there is no movement — no matter how massive — that can defeat the stubborn insistence of basic facts.

So is Sanders’ campaign doomed, now that he’s revealed himself to be either disingenuous or ignorant when it comes to mass incarceration? No, not remotely; Clinton, too, has made promises it is incredibly hard to imagine her being able to keep. What the strong pushback his proposal’s received from many sympathetic pundits does suggest, though, is that their patience for his idealism is not unlimited.