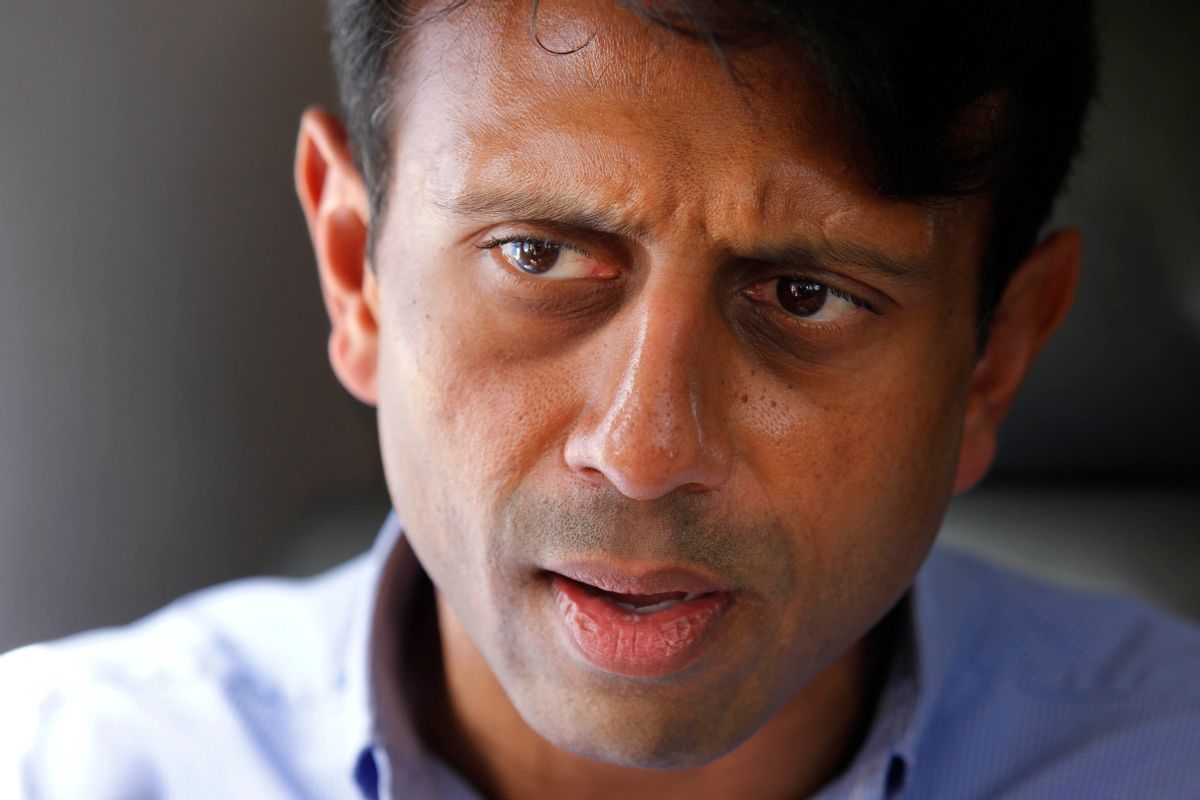 Former Louisiana Gov. Bobby Jindal may be long gone from the presidential race, but thanks largely to his toxic cluelessness about economics and rock-ribbed faith in trickle-down economics, the damage he did to his state will live on for some time.

This week, the state’s legislature began a special session to deal with Louisiana’s budget shortfall, which will be somewhere around $940 million this fiscal year and as high as $2 billion next. The enormous crisis is a parting gift from Jindal to his successor, Democrat Jon Bel Edwards, who was sworn in last month. Maybe Edwards should send Jindal a fruit basket or a sack full of copperhead snakes as thanks.

This is not to say that the budget deficit is entirely Jindal’s fault. But it does stem in large part from his instituting in Louisiana the same kinds of budget-busting tax cuts that Sam Brownback has used to turn Kansas into a fiscal insane asylum. And it underscores the damage that could be done to the country as a whole if any of the supply-side-espousing Arthur Laffer wannabes currently running for the Republican nomination win the White House in November.

When Jindal assumed office in early 2008, Louisiana’s budget was just about to start showing signs of strain. The state had seen several years of huge revenues thanks to oil prices above $90 per barrel and federal contracts related to rebuilding the state after the devastation from Hurricanes Katrina and Rita. Like George W. Bush had done early in his administration, Jindal, his predecessor Kathleen Blanco, and the state legislature didn’t put some surplus money aside for a rainy day. (Ironic, considering how many hurricanes have plowed through the state.)

Additionally, Jindal started throwing tax credits and cuts around almost from the minute he was sworn in. He pushed through the largest income tax cut in state history -- $1.1 billion over five years -- which he saw as a prelude to completely eliminating the state’s business and personal income taxes. Which, when the state was flush, must have not seemed insane, at least to Republicans who never think a tax cut under any circumstances is insane.

But like Jindal’s presidential campaign, the good times couldn’t last forever. The lingering effects of the 2008 financial crisis and recession, the end of much of the federal disaster spending from Katrina and Rita, and the worldwide drop in oil prices all helped to crater the state budget, which led to the current crisis.

In addition, Jindal had signed the ever-insane “Never ever, ever, EVER raise taxes under any circumstances” pledge, peddled by Grover Norquist and his organization, Americans for Tax Reform, that long ago became de rigueur for Republicans. Future generations will marvel at how completely Norquist’s snake oil captured our politicians, assuming they’re not too busy scrounging for food and shelter in the giant waste dumps that were America’s states before the likes of Bobby Jindal and Sam Brownback got hold of the governor’s mansions.

Instead of tax increases, Jindal proposed an ever-more-ridiculous list of ideas for closing budget gaps that did absolutely nothing to address the underlying structural problems with the state’s budget. Raid the $800 million Medicaid Trust Fund for the Elderly to close one year’s shortfall, even though the nursing homes and elder care it pays for will still be a need indefinitely? Great idea! Sell off a few state-owned vehicles? The $1.4 million generated by that is such a small drop in the bucket, Jindal might as well have used it to buy Powerball tickets.

The end result of mismanagement by two governors and the legislature over the last decade is that the state now has to decide on some pretty significant cuts. Edwards has gone so far as to suggest that Louisiana State University will have to cancel its next football season, which is a little like suggesting to a vampire that he find some fresh vegetables to replace all the blood in his diet. The governor had to walk that one back when it became clear that half the state might call for his impeachment over it.

Fear-mongering over football aside, there is a real danger of cuts to Louisiana’s schools and institutions of higher education. Nicholls State University is considering shutting down temporarily. The state’s TOPS program, a college scholarship fund for Louisiana high-school students who attend one of the state’s public universities, could see severe cuts. For a state with public schools that already rank 48th in overall education quality, this is a huge blow.

Certainly Louisiana’s experience is not the first time that the promises of supply-side economics have been proven to be a fraud and a knife in the guts of effective governance. And yet, though Jindal is gone, every Republican candidate is proposing some version of a giant tax-cutting scheme that will blow holes in the national deficit, making more deep cuts to social-welfare programs inevitable down the road. And yet Louisiana, along with Kansas, will almost certainly vote for the Republican candidate in November. It’s enough to make you wonder what other evidence conservatives need to see that their economic policies don’t work.