The costumes were fun, but Mother Monster missed what was strange and risky about Bowie's work 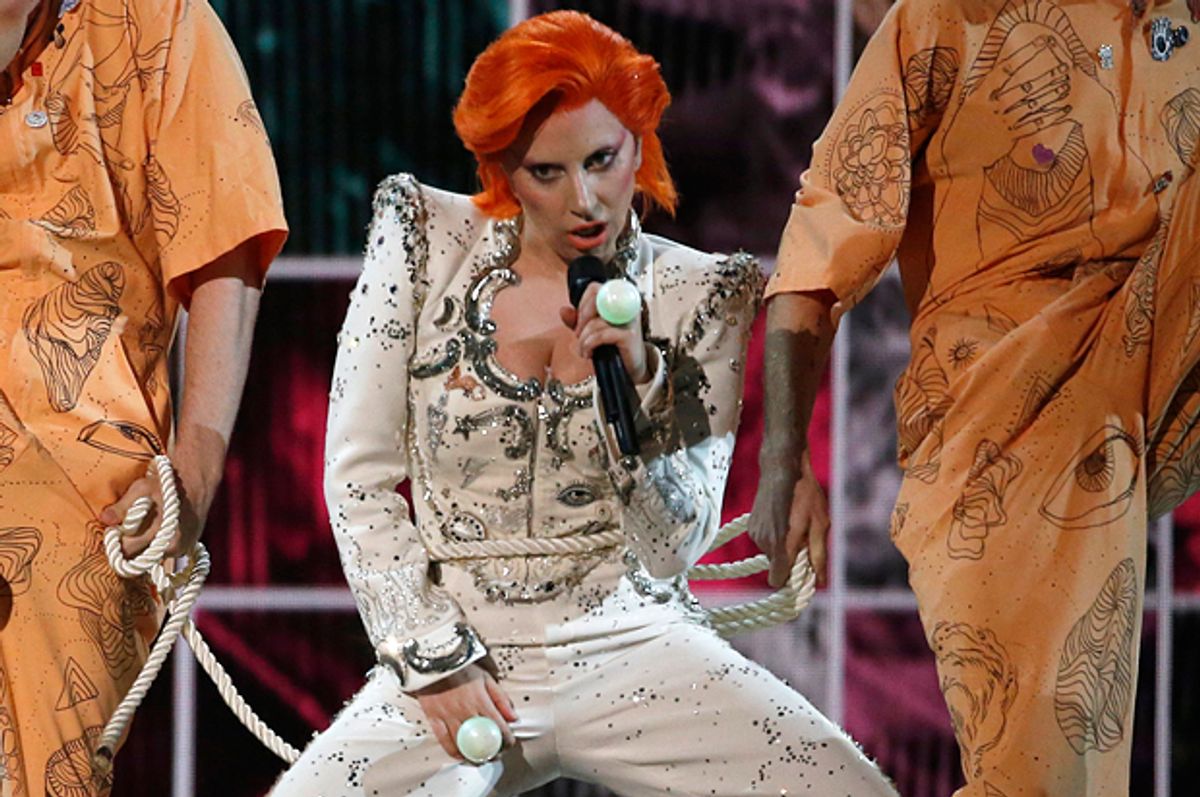 When it came time for the Grammys to plan a tribute to David Bowie, it probably took them no time at all to come up with the perfect choice for a contemporary artist who reflected the late Englishman’s protean nature. “Lady Gaga may not be the next David Bowie,” Kevin Fallon wrote on The Daily Beast. “But if anyone can approximate the mood, the message, the spirit, and the stirring camp as the recently deceased icon, it’s the human and the alien in our Mother Monster, Lady Gaga…. For sheer significance, there is no other artist today who engages with such glee the orchestration of new personas and the reinvention of identity.”

There’s no doubt that Gaga feels Bowie’s inspiration in a real way. And thanks in part to sponsorship by Intel, the web is alive today with chances to see Gaga either performing Bowie songs or preparing to do so, and talking about his influence on her.

The costumes were fun. And Gaga – who trained at Julliard, after all – has a technically strong voice, as she already made clear to anyone who didn't know at the Super Bowl earlier this month. In fact, technically, her performance was flawless. And having R&B legend and Bowie producer Nile Rodgers along was a smart choice.

But all the intangible things that made Bowie important – his imagination, his soul, even (a strange word to use for a chameleon like him) his originality – were lacking from the slick costume show of Gaga’s Bowie tribute.

For all of his emphasis on visual spectacle, fashion, and pop-cultural currency, Bowie was a musician first and foremost. And he was attracted not just to trendy styles and ideas, but to the genuinely strange and risky. His Ziggy Stardust character, for example, may’ve drawn on an existing pop-culture fascination with gender and science-fiction and the end of the world. But through craftsmanship and melody and a distinctive singing voice, Bowie made this set of ideas his own, and came up with songs that will last forever.

Even though others – Marc Bolan, for instance – were gender-bending at the same time, Bowie’s sexual ambiguity was original, and in some ways dangerous, in the ‘70s. His turning to R&B with “Diamond Dogs” was more than just a costume change. His albums with Brian Eno – “Low,” “Heroes,” and “Lodger” – were not aimed at the charts, but were an artist’s dive into a strange kind of sonic experimentation. His working with black musicians -- including Rodgers on “Let’s Dance” -- also had serious stakes in a more segregated musical world.

But much of Gaga’s career has been about going places other musicians – especially Bowie – have already been. Her songs are like extended quotations. And last night, by cramming almost a dozen Bowie songs into a five-minute bit, they ended up just seeming like quick gestures by a musician playing dress-up.

Despite the technical strength of her voice, Gaga’s pipes weren’t terribly well-suited to Bowie’s songs. And the tracks she chose were the most overplayed in the Bowie catalog. Could she have mixed the well-known with less obvious ones? Tossing in a minute of something weird would have showed that she really dug the range of Bowie and not just the hits. The Grammy audience -- and the Grammy programmers -- would have gotten a sense of how unorthodox Bowie could be.

Bowie loved popularity, and splicing art with pop, but his best work saw him taking chances, and not just technical chances. His music existed alongside the popular music that surrounded it, but also stood outside. Gaga’s music sounds like what’s already out there, but with a complicated art-historical justification. She’s closer to Jeff Koons than to Bowie.

In a Grammy broadcast that included a limp tribute to the Eagles, way too much Lionel Richie, and Meghan Trainor besting Courtney Barnett for the best new artist award, Gaga’s nod to Bowie wasn’t the worst thing the night offered. But Bowie was a titan, and deserved a better, stranger send-off than Gaga’s karaoke.