Scalia truthers: The murder conspiracy theories don't surprise us at all — it's typical, mainstream Republican paranoia 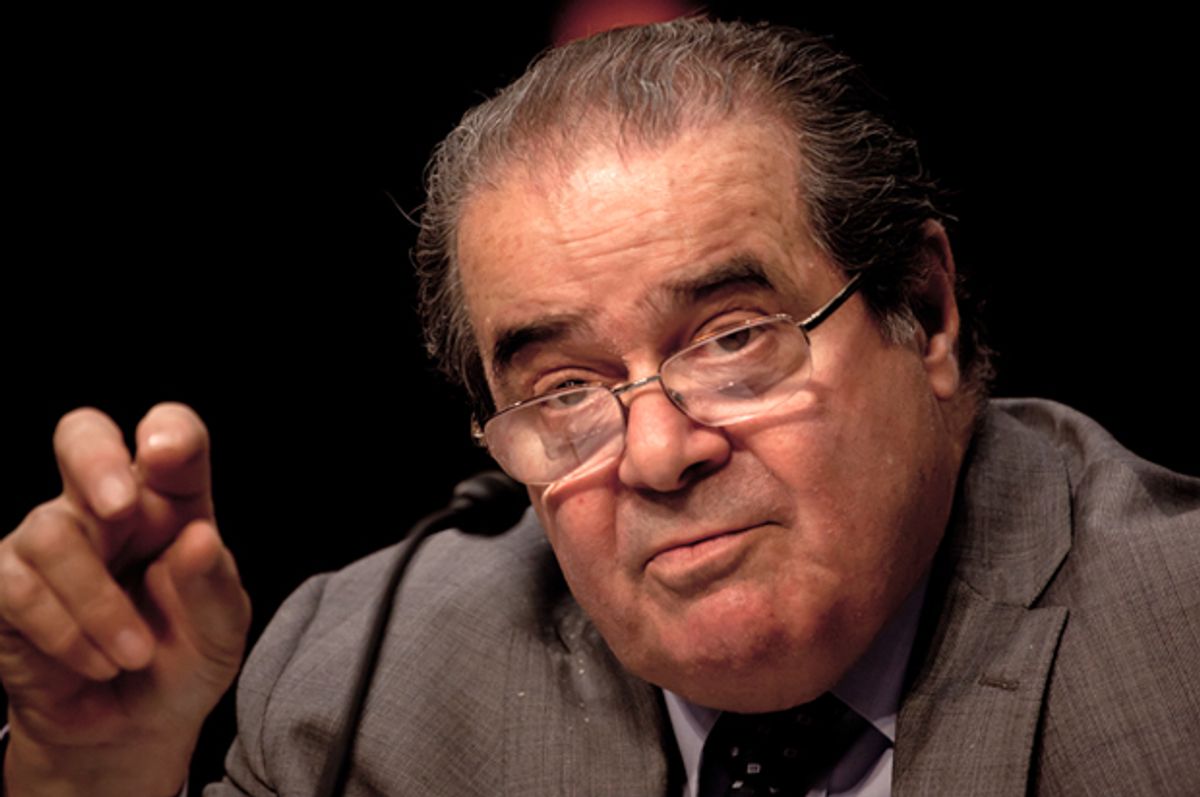 With social media and right-wing paranoia at a crescendo, it's not surprising that a conspiracy theory about Justice Antonin Scalia's death started to form before the body was buried. Scalia was an elderly man with a whole host of health problems, but to hear some on the right express shock and suspicion about it, you'd think it was a 25-year-old at the peak of health who had keeled over at a hunting ranch outside of Marfa, Texas. It must be murder, don't you know?

It's easy to write off these conspiracy theories as just internet chatter, but in fact, the Scalia death conspiracy theories are just another flavor of the same kind of entitlement and paranoia that is leading mainstream Republican figures to deny that President Obama has a right to appoint Supreme Court justices, even though that right— nay, duty — is laid out in plain language in the constitution. Both the fringe and mainstream conspiracy theories are about the conservative belief that conservatives are the only legitimate holders of power, and that Democrats and liberals who gain power must have used illegitimate means to get there.

And honestly, it may not be quite right to call the Scalia-was-murdered conspiracy theory a fringe theory at all. It started that way, of course, with Alex Jones, who doesn't seem to believe that anyone dies of natural causes, arguing that his "gut" says Scalia was murdered and that "they" are going to kill more conservative figures like Clarence Thomas and Donald Trump. But it didn't take long before the Drudge Report decided to kick this idiocy into the more mainstream right. (That the Drudge Report is a mainstream conservative outlet tells you all you need to know about why things have gotten so bad.)

Then Trump had to get involved, playing his usual I'm-not-saying-just-asking-questions game in order to raise the specter that Obama had Scalia murdered. Trump was on Michael Savage's show on Monday, and Savage asked if he believed that Scalia was murdered. While refusing to sign off completely on the conspiracy theory, Trump did say he found it "pretty unusual" that Scalia had "a pillow on his face."

The New York Post is also pushing this "pillow" story and Breitbart is out there implying that Scalia's widely reported health problems leading to his death are false. They're not coming right out and saying he was murdered, like Alex Jones, but this just-asking-questions maneuver is a way to fuel the conspiracy theory while maintaining deniability.

Things weren't helped by the fact that this area Scalia died in, rural west Texas, is extremely remote and underpopulated, which means that confirming his death was a long, confusing process. But even if he'd died at home in D.C., odds are high that conservatives would still be promoting these conspiracy theories. That's because this isn't actually about legitimate concerns about the nature of his death, but a way for conservatives to perpetuate the notion that any Obama-appointed justice to replace Scalia is inherently illegitimate.

This belief, that Obama is illegitimate and everything he does shouldn't count, undergirds the entire conservative movement. It's the idea the Tea Party formed to perpetuate and it's the notion that is fueling the Trump campaign, with its argument that America was once great but is now in decline and needs restoration. It's the notion that immediately defined and solidified the Republican reaction to Scalia's death, which was to immediately deny that Obama had any right to appoint his replacement and then to start casting around for some official-sounding reason to justify this belief.

What's amazing is that the more official, mainstream version of the Obama-has-no-right argument is even dumber than the murder conspiracy theories. After all, if Obama did have Scalia murdered, then there really is an argument to be had that he shouldn't be allowed to name his replacement. But instead, Republicans have turned to the Calvinball strategy, making up a new "rule" about how you don't get to appoint justices in your last year of office, and then taking umbrage at anyone who points out that you don't actually just get to make up the rules as you go along.

The more official line of bullshit is highly reminiscent of the elaborate but incoherent faux-legalese that is spewed by the self-declared "Patriot" movement, the right wing fringe that most recently made the news by occupying a federal wildlife refuge in Oregon. The Patriot movement loves spinning convoluted pseudo-legal arguments about how the federal government has no authority to own land, levy taxes, or enforce the law.

Now the nakedly self-serving arguments disguised as appeals to law or tradition have made the jump from militiamen declaring that income taxes are illegal to actual Republican Party leaders trying to spin pretzel stories about how a duly elected President somehow doesn't have the rights and duties plainly given to him in the Constitution. The barriers between fringe conservatives and the mainstream are starting to fall apart.

Both the dark insinuations of murder and the Calvinball tactics of declaring the President's last year doesn't count are, of course, just feints. The ugly fact of the matter is that conservatives simply don't believe Obama has a right to be the President. Yes, he won the general election by a landslide, but, in both 2008 and 2012, the majority of white voters voted against Obama.

From day one of Obama's presidency, the opposition has been rooted in this belief that white Americans are more legitimate, as voters and citizens, making it impossible for them to accept that one can be a legitimate President without winning the majority of the white vote. That's what this is about and all the handwaving about murder and lame duckness and whatever other nonsense argument they're spinning today is about serving this ugly, but unspeakable belief about race and legitimacy.

Scalia was willing to advance any incoherent, self-contradictory argument as long as it shored up this belief that white conservatives are the proper rulers of this country and that no one else deserves to have power.  Of course his death is going to have symbolic weight for the right, especially in light of the fact that Obama is going to nominate someone from that "other" America, one embraces racial diversity, feminism, and cosmopolitan values. To let this happen without a fight is to accept what is unacceptable to the right, which is admitting that they are not actually the majority in this country. And they will advance any idea, no matter how ridiculous or embarrassing, to justify their anger over a changing America.