"Obama has a soft spot for homosexuals because of the years he spent as a male prostitute in his twenties": Meet the looniest politician in Texas (and that's saying something)

Bat-shit nuts candidates are everywhere in Texas -- and sometimes even win. This year, there's a special case 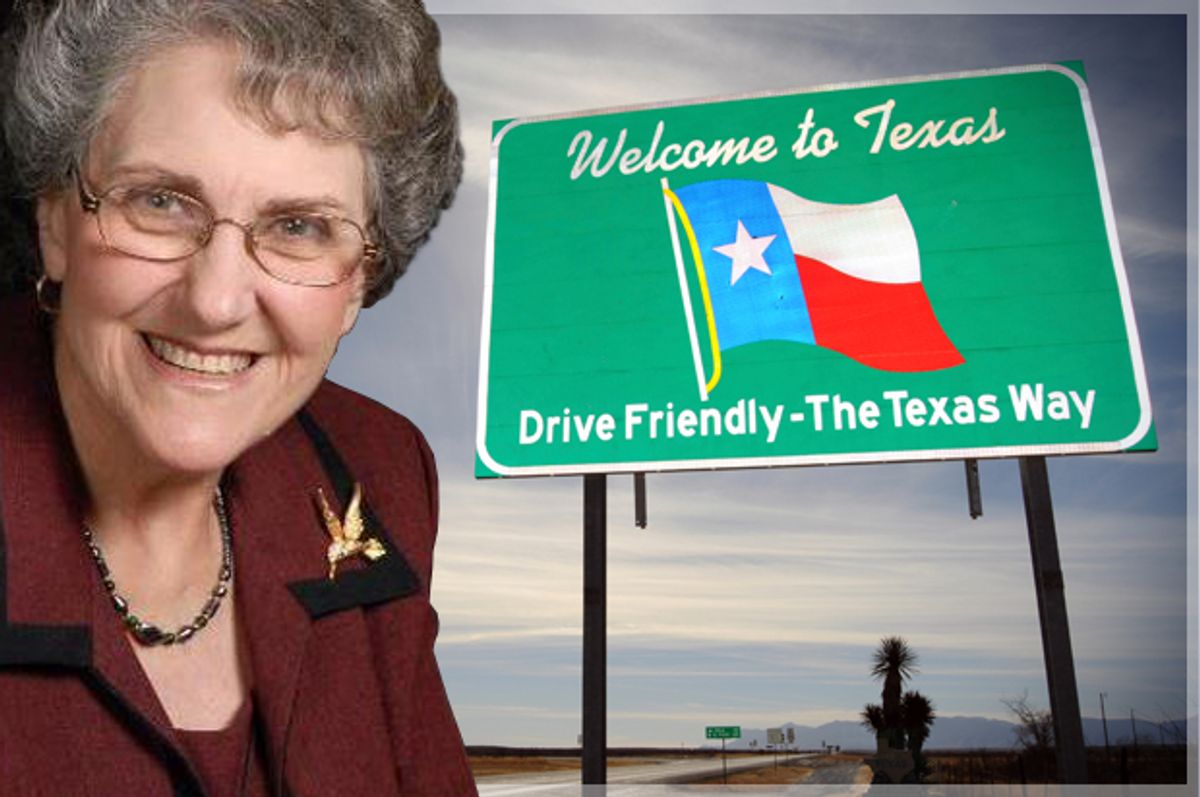 Singer-songwriter Gary P. Nunn sometimes closes his shows with a ripping rendition of “You Ask Me What I Like About Texas.”

Ah, Texas! The Lone Star Beer, the barbecue, the boots, the bullshit, the batshit-crazy candidates routinely elected to public office. Among the elected officials is a Republican attorney general so religiously homophobic that he has gone to court to try to dissolve the marriages of a lesbian couple from Austin and a gay couple from Houston, one of whom is deceased.

Now comes a serious contender for the 15-member State Board of Education, the body that enacted curriculum guidelines requiring students to learn about Confederate heroes, and required teachers to explain the equivalency of Abraham Lincoln’s and Jefferson Davis’s inaugural addresses, as well as the ways international institutions such as the United Nations threaten U.S. sovereignty.

Republican candidate Mary Lou Bruner might fit right in—and move seamlessly from her current gig as vocal critic of the board to elected board member.

The retired teacher has written that “Evolution is a religious philosophy with propaganda supporting the religion of Atheism.” She also claims that scientists have ignored and hidden evidence that humans and dinosaurs walked the planet at the same time.

Bruner, in fact, has written about the extinction of dinosaurs. “When the flood waters subsided and rushed into the oceans there was no vegetation on the earth because the earth had been covered with water. . . . The dinosaurs on [Noah’s ark] may have been babies and not able to reproduce. . . . After the flood, the few remaining Behemoths and Leviathans may have become extinct because there was not enough vegetation on earth for them to survive to reproductive age.”

Meanwhile, “Climate change has nothing to do with weather or climate, it’s all about system change from capitalism (free enterprise) to Socialism-Communism. The Climate Change HOAX was Karl Marx’s idea. It took time to ‘condition’ the people so they would believe such a HOAX!”

Is Bruner an anomaly?

Not hardly, as they say in Texas.

Consider Republican State Rep. Cecil Bell—an amiable, adipose goof who wears an LBJ-style Cattleman Crease Stetson, which he tastelessly left sitting on the table beside the pink frosted birthday cake he sliced and served at the 10th anniversary of the state’s constitutional amendment prohibiting same-sex marriage. That was four months before the Supreme Court’s Obergefell v. Hodges decision ensured that Bell’s party, attended by more than 20 of his colleagues, would be the last.

At the time, Bell had filed four of the 20 anti-LGBT bills on the legislative calendar in the 2015 session.

Not to be outdone by a legislator, Republican Attorney General Ken Paxton, under indictment for securities fraud, persists in his attempt to annul the marriage of two women who used a decision by a state probate judge to obtain a marriage certificate four months before the Supreme Court Justices ruled on same-sex marriage. Although the women can now legally marry, Paxton wants the first marriage annulled.

The AG’s animus toward gays is so ardent that he created a legal cause of action against a dead man, expunging the term spouse from a death certificate of a man who had married in another state and died in Texas, where he and his partner had relocated. A federal judge ordered Paxton and a state agency to amend the death certificate and held him in contempt of court.

Lieutenant Governor Dan Patrick won election in 2014 in part by establishing himself as the most committed creationist among the four candidates in the Republican primary, all of whom objected to the teaching of evolution in public school science classes without informing students that there is another competing scientific theory derived from the book of Genesis.

Patrick declared his landslide victory over an incumbent to be providential: “We never backed away from being bold for Jesus Christ . . . we worked hard and left the victory to God . . . if you really believe in God, then you take him at his word that he’ll handle the victory.”

But back to State Board of Ed candidate Bruner.  She has the backstory that explains why President Obama is such a softy on LGBT rights.

“Obama has a soft spot for homosexuals because of the years he spent as a male prostitute in his twenties. That’s how he paid for his drugs. He has admitted he was addicted to drugs when he was young and he is sympathetic with homosexuals; but he hasn’t come out of the closet about his own homosexual/bisexual background.”

I could go on to, say, Rev. Rafael Cruz, who shares some of those beliefs, in particular on divinely selected political leaders.

And so could Bruner: Communists killed “the good guy” (JFK) to put a “socialist” (LBJ) in the White House.

Enough. If you have an appetite for this sort of thing, follow the Bruner campaign on the Texas Freedom Network’s website. Or friend Bruner on Facebook. What you read might make you reconsider that trip to Austin for SXSW this March.

Originally published by The Washington Spectator