Political paralysis is the new normal: The GOP's Scalia gamble may be suicidal, but it's not illogical

Trapped by its lunatic base, the GOP goes all-in on nihilism -- but in 2016, we can't assume that helps Democrats 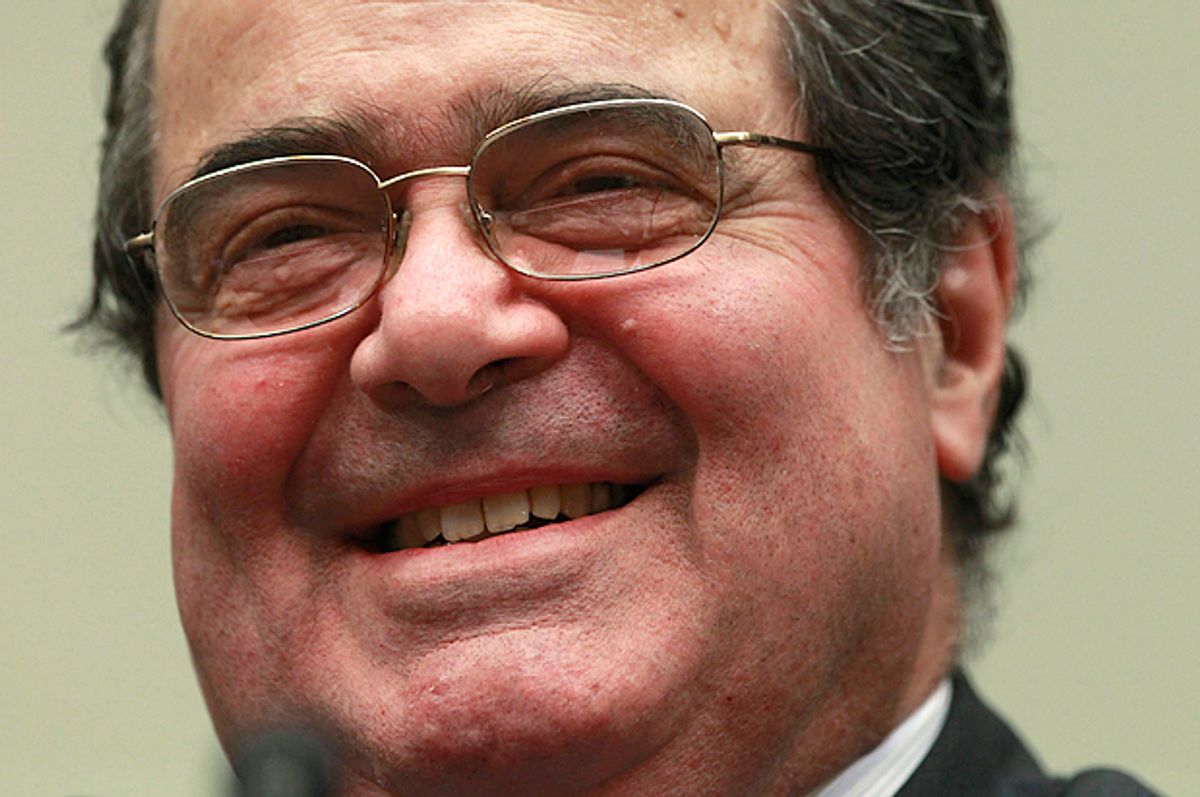 According to numerous scholars who have weighed in since the death of Justice Antonin Scalia over the weekend, historical and constitutional precedent indicates that the president of the United States is elected for a four-year term, and does not stop being president until he or she, um, actually leaves office. That’s a hot take on a controversial topic, I know! It’s nearly as confusing as the question of who was president at the time of the 9/11 attacks, which Marco Rubio seems to think took place during some extended Bill Clinton prequel to “The Hangover,” while George W. Bush wore funny costumes and did non-alcoholic Jell-O shots and kept forgetting he had taken the oath of office.

But history’s bunk, as Henry Ford sorta, kinda said nearly a century ago. And so is reality, at least when it comes to politics in 2016, a year whose revolutionary strangeness demands a new descriptive term. “Postmodern” is way too old-fashioned, too ‘90s. Our politics are increasingly post-partisan, post-rational, post-factual and even post-political. Even the New York Times has noticed. In a story published Tuesday about the running battle over judicial appointments between the Obama administration and the Republican leadership of the Senate, reporter Charlie Savage wonderingly observed that “history is no longer a guide in a polarized Washington, where partisan warfare over judicial nominations has been escalating for more than a generation.”

That qualifies as what Friedrich Nietzsche would have called a “daybreak” moment, the dawning of a new awareness. (I agree that I quote him too much; that’s it for now.) Please notice the inherent contradiction in Savage’s sentence: “History” is no longer a guide because it is no longer history, that is, because the lessons that a mainstream commentator is supposed to draw from history no longer reflect what has actually happened. The Republican Party’s long-term strategy of paralysis, refusal and denial — of crushing all lingering vestiges of democracy under a sodden weight of nihilism and apathy — is the new normal.

That strategy stretches back at least as far as the Bill Clinton years, and has gone into Koch-funded steroid overdrive in the Citizens United era. As its zillionaire funders clearly grasp, that strategy represents the GOP’s best hope for repeated midterm victories and a stranglehold on congressional power into the indefinite future. It’s the strategy that produced the Koch brothers’ greatest single victory, to set against their more visible record of bankrolling losers like Scott Walker and Jeb Bush (and, most likely, Marco Rubio). That victory was, of course, the 37 percent turnout in the 2014 midterms, when both Democrats and moderate Republicans stayed home in droves and the GOP won its largest congressional majority since 1931.

So I don’t think it’s quite right to describe the Republican leadership’s vow to reject any possible Supreme Court nominee put forward by President Obama during his last year in office as unprecedented or particularly surprising. It’s useless to talk about precedent as if that word meant something these days, for starters. There is no relevant precedent for anything happening in American politics right now, except perhaps for some limited parallels one could identify in the severely divided nation of the 1850s, on the cusp of the Civil War.

As far as surprise goes, give me a break. Do I take a cynical view of all the expressions of amazement and righteous indignation from Hillary Clinton and Bernie Sanders and every other leading Democrat and the entire leftward half of the commentariat? Sure I do: They sense political opportunity and the chance to shoot a flattering selfie with the Constitution behind them. Which is fair play and all, but let’s not mistake it for high-minded principle. It might be fair to give Sanders an asterisk on this one, but the Democratic Party as a whole has been a junior partner or fellow traveler in the politics of paralysis, and has done virtually nothing to resist it.

It’s no secret that the current Republican leadership in Congress is essentially held hostage by the most extreme elements of its base. We have all forgotten about John Boehner, for understandable reasons, but please remember that the duly elected speaker of the House was forced to quit for being not enough of a do-nothing obstructionist. For any elected Republican to offer a fair hearing to any Obama nominee at any level of government is tantamount to treason; half the Republican electorate apparently believes that Obama is not a United States citizen and not the lawful president in the first place. What proportion of them believes that Obama had Scalia murdered in order to ban all guns, open the borders and institute Sharia law remains unclear. (“I’m hearing it’s a big topic,” says Donald Trump, fueling a new bump in the polls.) And here we are, facing a Supreme Court vacancy after the death of the most conservative justice in recent history — or ever, quite likely — under the aforementioned lame-duck Islamo-Democratic so-called president.

Whether the Republicans can successfully run out the clock on the Obama administration without paying a devastating political price remains to be seen. It’s a massive gamble, a game of Russian roulette played with four or five bullets in a six-shooter. But their vow to do so is the logical fulfillment of their party’s long-term commitment to paralysis as politics, and it comes as a surprise to absolutely nobody in Washington. If that tactic poses unknowable hazards for the GOP in general and its presidential nominee in particular, that’s not because it is qualitatively different from what they’ve been doing for years. It’s only because it thrusts the nihilistic strategy of the right-wing conserva-trolls who have eaten the Republican Party’s soul into the public’s face in blatant and unavoidable fashion.

Honestly, it was more surprising to hear Sen. Charles Grassley of Iowa, chairman of the Senate Judiciary Committee, take half a step back from the GOP hive-mind on Tuesday and suggest he might actually fulfill his constitutional role to hold hearings on an Obama nominee. Once upon a time, Grassley came off as a right-wing zealot among Senate Republicans. Now he’s a congenial bipartisan man of reason, not to mention an 82-year-old incumbent who faces a tough reelection fight in a purple state that Obama carried twice. Let’s not waste any compassion on Grassley, because he deserves to ride the slippery slide of ignominy however that happens. But I feel sorry for the folks who are fielding all the outraged phone calls in his Capitol Hill office right now. I don’t know whether it’s too late for some Tea Party firebrand to mount a Republican primary challenge in Iowa, but I guarantee that question is being pondered right now.

It’s tempting to express delight at the current GOP dilemma, where Republicans would seem to face death by fire from the pitchfork-bearing faithful if they move forward with an Obama Supreme Court nominee, and death in the frigid ocean of a national election if they don’t. It’s tempting if you’re wearing ideological blinders, that is, and if you assume that the Democratic Party, even in its divided and eviscerated state, is guaranteed to reap a glorious victory after a lemming-like wave of Republican mass suicide. I don’t think that’s a safe assumption.

Our entire bipartisan political system is in dire and potentially terminal condition, and as I keep insisting there are ample reasons to believe that the virus that has destroyed one party has also infected the other, albeit in less dramatic fashion. We’re already in a year when the Republicans seem likely to nominate a lunatic demagogue who is despised by the entire party leadership — and who, whatever he is, is not a “conservative” by anyone’s definition — and when a septuagenarian Jewish socialist is one or two victories away from being the Democratic front-runner. What will come of Obama’s impending Supreme Court nomination, and who will inherit the resulting mess next January? I have no idea. But if you still think political normalcy is about to reassert itself, any minute now, I have two words for you: Hi, Jeb!