The GOP's Supreme Court strategy: Stonewalling is what they do best, so don't count on Republicans abandoning their hard-line obstructionism 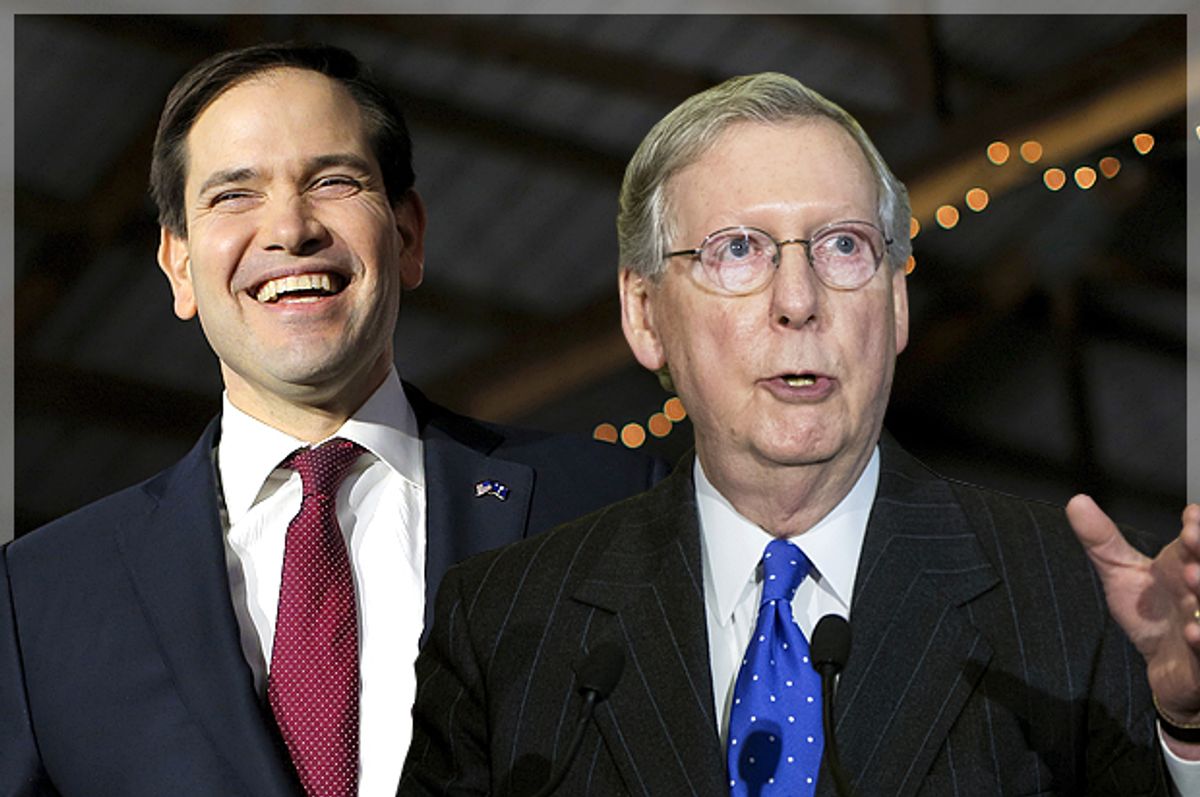 The Republican reaction to Supreme Court justice Antonin Scalia’s death this past weekend was swift and unified: They ruled out the very notion that any nominee put forth by Barack Obama would even be considered for the High Court. From both houses of Congress and the presidential campaign trail, there was broad agreement that President Obama, his constitutional duties and prerogatives aside, had no business nominating a new Supreme Court justice with a presidential election just nine months away. The issue, they insisted, had to be resolved by the incoming president, whoever that may be.

The reaction to all this from Democratic and liberal quarters was justified outrage. It’s one thing to argue that the Republican-controlled Senate has the right and power to reject whomever Obama nominates, and quite another to argue that he should not even attempt to fulfill his obligations as president but rather defer the duty to an as-yet-unidentified successor. It’s a bizarre theory of politics that argues that an election that hasn’t happened yet carries more authority than the one that actually sent the president to the White House for a second term. But the GOP is insistent upon turning this into an argument over whether Obama’s nominee – and he is going to nominate someone – should even receive a hearing in the Senate.

One strain of thought among Democrats and liberals is that Republicans won’t be able to withstand the political pressure that will come with nine months of blanket obstructionism. This idea got a boost on Tuesday when Senate Judiciary Committee chairman Chuck Grassley seemed to leave open the possibility of a confirmation hearing, a quarter-step back from his initial position that Scalia’s replacement should be chosen by Obama’s successor. Sen. Chuck Schumer took it as proof that the GOP will crack under the political pressure, like it did during the 2013 government shutdown. “Just as in 2013, when there was a huge public outcry and the Republican leadership had to back off, the same will happen now – and they will have to back off this extreme partisan stance.”

I’m not so sure about this, and I think the government shutdown is not a good point of comparison here. As you probably recall, the government shutdown was over funding for Obamacare, which Republicans uniformly oppose. But beneath the surface, the party was riven with internal fissures over how best to tackle the Affordable Care Act. The pro-shutdown faction felt justified going to extreme measures to cut off funding, while the more pragmatic Republicans wanted to pursue less dramatic and politically toxic options.

The same is not true with the brewing fight over Scalia’s replacement. The party, by all accounts, seems to be on the same page strategy-wise: blanket opposition with the insistence that the next president choose the nominee. And, more important, there is no crisis point in a Supreme Court nomination fight that will force the GOP’s hand politically. The Republicans felt pressure during the government shutdown because they were already divided on its wisdom, and because the media covered it as a legitimate crisis that had real, damaging effects on people. A Supreme Court vacancy doesn’t have that sense of urgency. The Republicans’ actions are nakedly political and contrary to political norms, but the court will continue to function without a ninth member – a point Marco Rubio made on Fox News the day after Scalia died.

Speaking of Rubio, he made another point this weekend that helps explain why Republicans probably aren’t going to budge on this one. “Here's the bottom line, I don't trust Barack Obama on the appointment of Supreme Court justices,” Rubio said on “Meet the Press.” “We cannot afford to have Scalia replaced by someone like the nominees he's put there in the past.” The GOP very much wants to keep this fight centered on Obama, and to the extent that that is possible, they have to treat whomever he nominates almost as an afterthought. They want to maintain the illusion that a credible nominating process cannot be had while untrustworthy “lame duck” Obama is in office. The moment they accede to hearings and the official trappings of the Senate’s “advice and consent” role, the fight ceases to be about Obama and instead shifts to the nominee and Republicans in Congress. Should the nominee demonstrate his or her qualifications and cruise through the hearings and still be voted down for no other reason than “because Obama,” the Republicans will be in an even less defensible position than they are now.

Put simply, Republicans know what can be accomplished by blanket, unyielding opposition: They might absorb some damage politically, but they’ll guarantee that Obama doesn’t get another Supreme Court pick and keep open the possibility that Scalia’s replacement will be picked by a Republican president. That’s the position they’ve staked out at any rate, and backing down from it will probably just cause them more political trouble than they’re already in for.