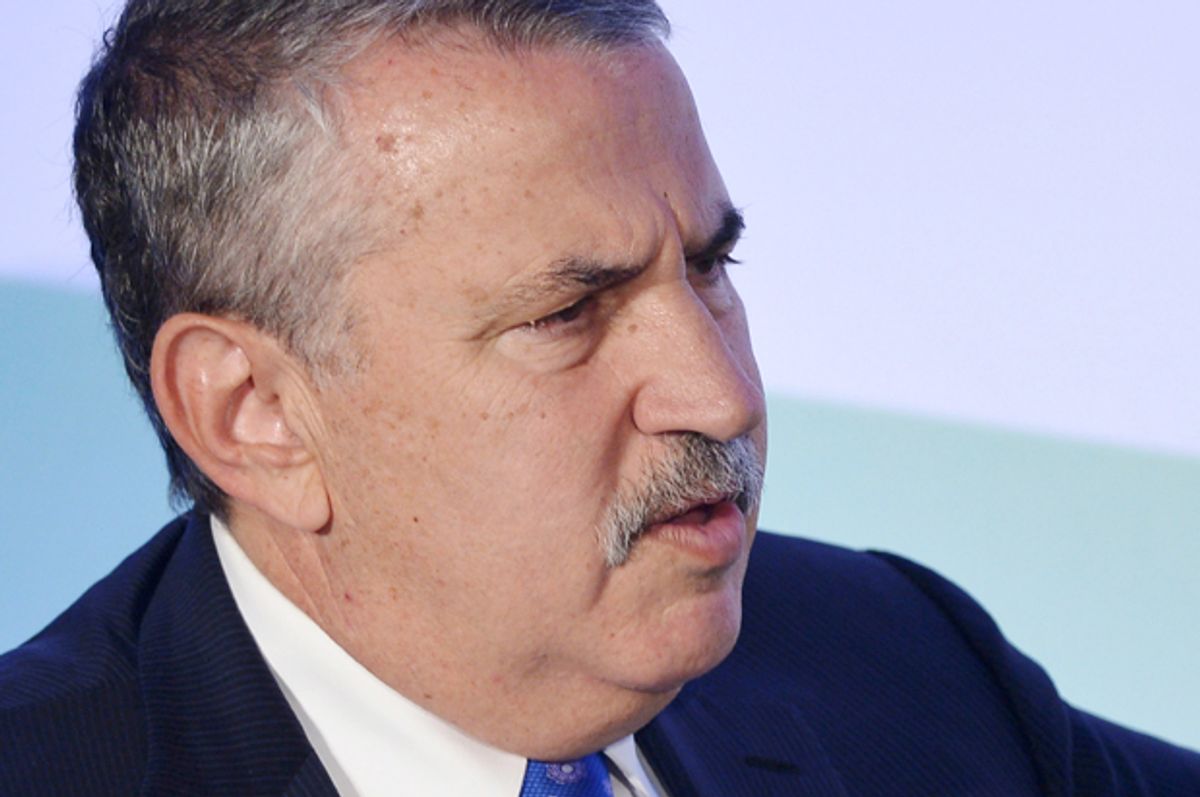 Thomas Friedman is terribly perplexed. The New York Times columnist asks “Who Are We?” this morning, a question prompted by his chilling realization that some of this year’s presidential candidates are doing quite well despite not believing in the same things as Thomas Friedman. This disturbing rebuke of Friedmanism has left the man unnerved and unsure, grasping for any sort of anchor as the world he observes from inside taxi cabs and airports stops making sense.

I find this election bizarre for many reasons but none more than this: If I were given a blank sheet of paper and told to write down America’s three greatest sources of strength, they would be “a culture of entrepreneurship,” “an ethic of pluralism” and the “quality of our governing institutions.” And yet I look at the campaign so far and I hear leading candidates trashing all of them.

The three candidates he singles out are Donald Trump, Bernie Sanders, and Ted Cruz, all of whom are responsible for denigrating one pillar of Tom Friedman’s America. The rap on Sanders, per Friedman is that he’s too hard Wall Street “fraud” and insufficiently celebratory of entrepreneurship. Bernie is “right that Wall Street excesses helped tank the economy in 2008,” Friedman allows, but “thanks to the Dodd-Frank Wall Street Reform and Consumer Protection Act, that can’t easily happen again.” Oh, well, if it’s more difficult now for the engine of wealth inequality to nearly destroy the global economy with its “excesses,” then what is Bernie’s problem? As for entrepreneurship, Friedman thinks Bernie needs to talk it up more because “we’re not socialists.” (If you’d like to read Sanders extolling the virtues of entrepreneurs and small businesses and explaining the threat Wall Street poses to both, I’d direct you to this interview and this debate.)

Regarding Trump, Friedman is (rightly) appalled by the billionaire GOP frontrunner’s anti-immigrant hectoring, calling it an assault on America’s pluralistic traditions. And, because Friedman is a good View-From-Nowhere pundit, he makes sure to note that “it’s an outrage that we can’t control our border, but both parties are complicit.” As for Cruz, Friedman is aghast that a Republican candidate is harshly criticizing the federal government and casting it as a malevolent force, which can only mean that Friedman himself has just emerged from a 40-year coma and not bothered to read up on recent political history. “Cruz wraps himself in an American flag and spits on all the institutions that it represents,” Friedman writes, describing the political posture of almost every Republican who has run for elected office since Barry Goldwater.

That leads Friedman to his big conclusion: they are all wrong, and I am right:

America didn’t become the richest country in the world by practicing socialism, or the strongest country by denigrating its governing institutions, or the most talent-filled country by stoking fear of immigrants. It got here via the motto “E Pluribus Unum” – Out of Many, One.

This happy bit of pabulum about American greatness is surely very reassuring for Tom Friedman, but he’s no closer to understanding the popularity of the three people he says are obviously incorrect about the character of the country. Instead of trying to grapple with the reasons why the attacks on his “pillars of American strength” are resonating with voters, he instead lectures the candidates on how they misunderstand Tom Friedman’s America. It's what you'd expect from a columnist who serves as a spokesman for the elite and the privileged – things are still pretty sweet at the top, so he can't quite grasp what all the fuss about.

It’s the pundit’s fallacy in action: Tom Friedman believes it, therefore it must be true. The way Friedman sees it, the problem isn’t that there’s been an erosion of faith in the ideas and institutions he believes in, it’s that the presidential candidates don’t spend enough time talking about how great they still are, regardless of what voters actually believe.