Bush and Kasich have to go: Why the GOP race is already over if the mainstream field doesn't clear soon

Rubio, Bush and Kasich are dividing the Republican Party to the point that none of them can win 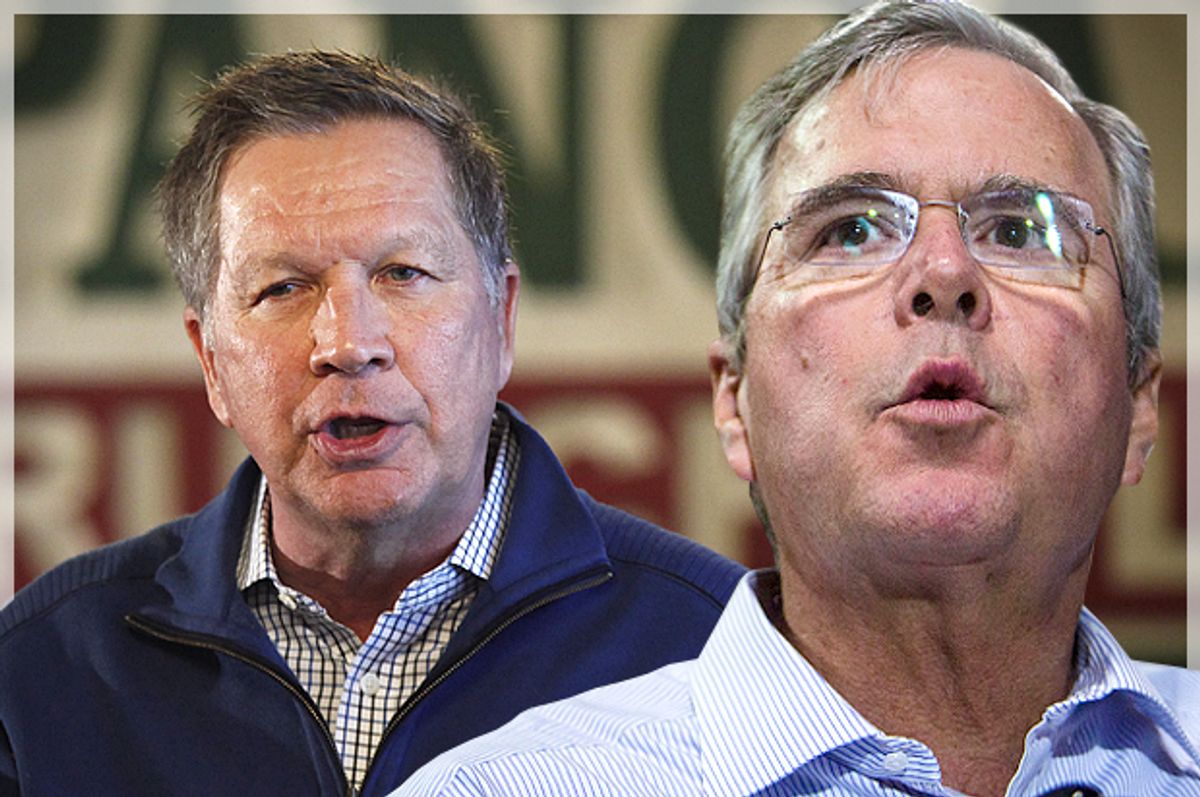 Barring an early Festivus miracle for the GOP, Donald Trump will win the nomination. At the very least, the Republicans are likely facing a brokered convention in July, an absolute disaster for the party. As I suggested last month, a brokered convention “would upend an already fractured party and it would marginalize key Republican constituencies...pitting the establishment wing of the party against practically everyone else.”

Republican insiders have waited in vain for the field to clear out. A few also-rans have left the race, but the field is still too crowded, particularly in the establishment lane. Trump is obviously a juggernaut, and Cruz has no incentive to quit, but the so-called mainstream candidates – Rubio, Bush, and Kasich – are dividing the party in such a way as to make it impossible for any of them to win.

Although he outperformed expectations in New Hampshire, Kasich has comparatively little money and virtually no chance of winning the nomination. He's polling last in Nevada and in nearly every other Super Tuesday primary state. At this point, his presence serves no purpose save for taking votes from Rubio, who is clearly the establishment's best shot at dethroning Trump. Kasich, however, appears determined to ride this wave as long as possible. Indeed, he's already abandoned South Carolina and is headed to Massachusetts, one of the few states his moderate message may resonate.

Jeb's prospects are scarcely better. He has a pile of cash to spend, but we've seen already how futile money is during this election cycle. Bush has gone all-in on South Carolina, knowing he has to stop the bleeding. After losing New Hampshire, a defeat in South Carolina would cement his fate – if it's not already evident. Bush now has his brother campaigning for him in South Carolina, one of the few places George W. remains popular. Nothing has worked, though. Jeb is currently polling fourth, well behind Rubio and statistically tied with Kasich. And Gov. Haley's endorsement of Rubio further signals his demise.

Despite the impossible odds, Kasich and Bush have given no indication of leaving the race, and that's bad news for Rubio – and the establishment.

As we approach Super Tuesday on March 1, the delegate math on the Republican side is starting to crystallize. A New York Times report sums it up well:

“On Super Tuesday, March 1, 25 percent of the delegates to the Republican national convention will be awarded. If the mainstream filed hasn't been narrowed by that point, it will become very hard to avoid serious damage to the candidate who ulitmately emerges as the party's annointed favorite. The top mainstream candidate could easily fall more than 100 delegates short of what he might have earned in a winnowed field. He would even be in danger of earning no delegates at all in several of the largest states because of one number: 20 percent.”

That 20 percent refers to the threshold for earning delegates in key states like Alabama, Tennessee, Texas, Georgia and Vermont, which together account for 57 percent of the delegates awarded on Super Tuesday. Rubio will need 20 percent of the vote in these states to receive any delegates at all. Trump is likely to win big in most of these places, but Rubio can stay alive if meets the minimum threshold. That, however, is highly unlikely if Bush and Kasich are on the ballot – it may be unlikely even if they weren't.

And it gets worse for party elites. As Nate Cohn notes, “a quick in the rules would send the delegates forfeited by the mainstream candidates straight to Donald Trump and Ted Cruz. That's because most Super Tuesday states allocate their statewide delegates proportionately among the candidates who clear the threshold for earning delegates.” Hence the pressure on Kasich and Bush to “suspend” their campaigns will be enormous after South Carolina and Nevada, assuming they do as poorly as expected. If they refuse to do so (and they probably will), the Trump train is almost certain to roll unimpeded to the convention.