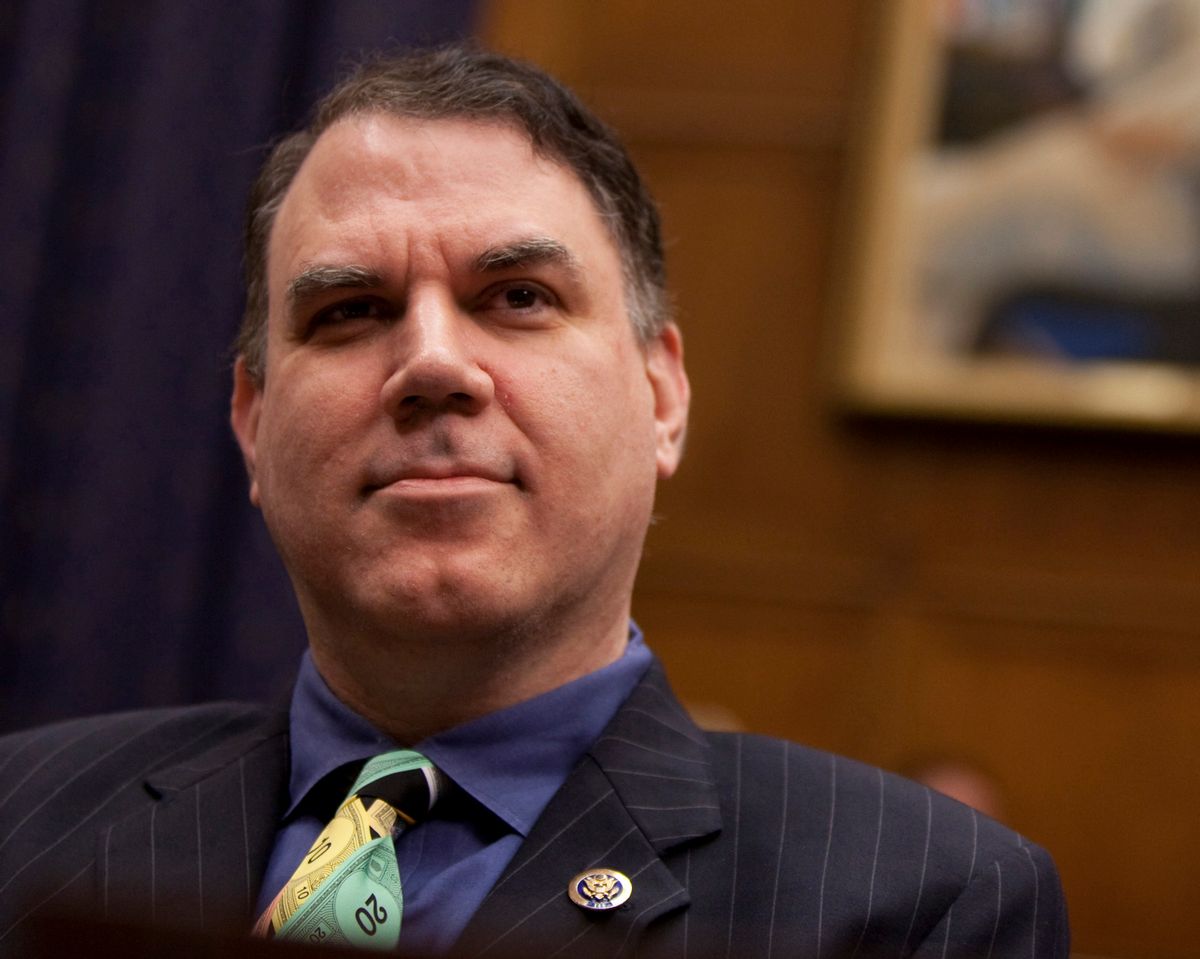 FILE - In this Oct. 1, 2009 file photo, Rep. Alan Grayson, D-Fla. listens during a hearing on Capitol Hill in Washington. For a while it looked like Florida Rep. Patrick Murphy might have a clear shot at earning the Democratic nomination for the U.S. Senate seat Republican Marco Rubio is surrendering to run for president. National and state party leaders quickly endorsed him, but fellow Rep. Alan Grayson, an outspoken liberal, seems determined to have a primary few in the party want to see. (AP Photo/Evan Vucci, File) (AP)
--

Call it the "Grayson Primary."

Florida Democratic Congressman Alan Grayson has decided to get a slice of the national media attention drawn by the Democratic presidential primary, steering donations and supporters to his election campaign, while making a statement on what he calls the "intrinsically undemocratic" portion of the primary election that are superdelegates.

Grayson, as a Democratic member of Congress, automatically receives one superdelegate vote. Many other superdelegates are unelected party activists and elites. What makes such delegates super, and not those awarded after elections, is that such superdelegates are not obligated to support any particular candidate as reflected by the vote of the people -- as many Democrats were surprised to learn in 2008.

“It’s troubling. There’s a negation of the popular will when you say that a block of delegates can vote regardless of what voters want,” the outspoken progressive firebrand told Buzzfeed on Wednesday. “There is a divide between grassroots Democrats and establishment Democrats,” he said. “The whole system causes me concern, the idea that if all the super delegates line up behind one candidate, the other has to win by, 59 to 41 in order to have a shot at the nomination, their candidate has to win by 18 points,” Grayson said.

Again, like in 2008, the Democratic National Committee has come under heavy criticism for the superdelegate system. According to a new Associated Press analysis, Clinton has picked up endorsements from 87 more superdelegates since her historic loss in New Hampshire, while winner Bernie Sanders has added just 11 superdelegates. Out of 712 superdelegates, Clinton leads 481-55.

Grayson, who is running for Marco Rubio's senate seat, sent an email to supporters this week, directing them to GraysonPrimary.com to select a Democratic presidential candidate for Grayson to support.

"Instead of selling my superdelegate vote to the highest bidder — like most members of the unDemocratic party these days — I am offering up my vote to you," the campaign website reads.

“Look, I’d be perfectly happy if our nominee were chosen exclusively in the primaries.  But 15% of the delegates to the Democratic Convention are chosen because of who they are, not whom they support,” Grayson followed up in the email. “And I happen to be one of them. I wrestled with that responsibility for a while, until I realized that I don’t have to decide — I can let you decide.”

“It could make one of the least democratic elements of the UnDemocratic Party into something really special — a decision Of the People, By the People and For the People.”

“We’re not gonna let the politburo decide this one," Grayson told Buzzfeed, adding that perhaps his endorsement, as well as his superdelegate vote, is up for grabs.