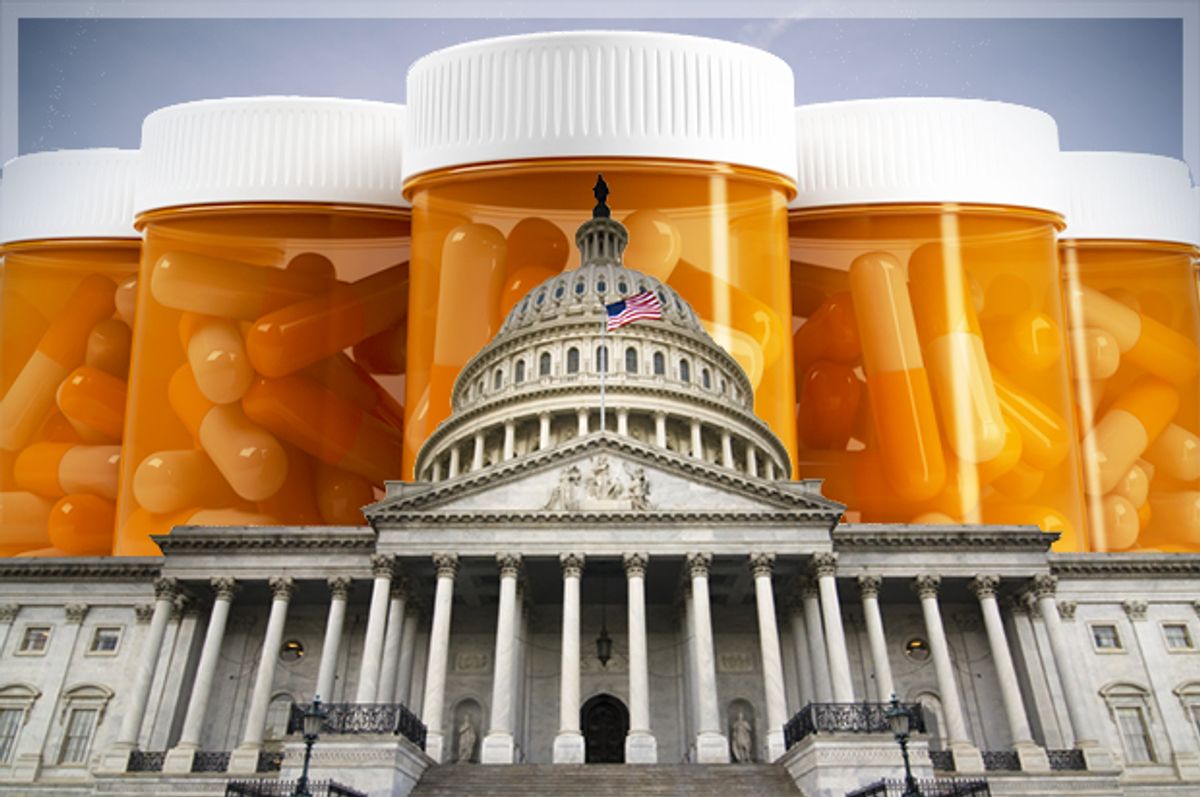 Big news, people! Especially for those of you upset by the skyrocketing prices of the essential prescription medicines you take -- including thousands of patients who were hit last year with a 5,000 percent price increase for one lifesaving drug!

Determined to do something about those despised price hikes, drugmakers themselves have reached into their corporate toolbox for the two most effective means they have to fix their price problem. Of course, putting more corporate cash into research to produce new medicines would be one of those tools, and a renewed commitment to honest competition would be the other, right?

Right! But Big Pharma gave up years ago on doing right, turning to two other corporate tools that have reliably generated a gusher of profits for them: advertising and lobbying. So here they come, wielding bigger-than-ever ad-and-lobbying budgets to deal with that pesky matter of public anger at price gouging.

If you wonder why Congress keeps ignoring what the people want it to do -- while doing things that people don't want it doing -- take a peek at the unique PR campaign now being run by Pharmaceutical Research and Manufacturers of America. PhRMA is America's largest pharmaceutical lobbying group and represents Eli Lilly, Pfizer, GlaxoSmithKline, Merck & Co and about three dozen other drug manufactures.

The intent of PhRMA's multimillion-dollar PR blitz and intensified offensive in Congress is not to restrain the gouging but to improve the industry's image in hopes of restraining lawmakers from taking steps to rein in prescription costs. Of course, the ads dishonestly fail to mention the selfish intent of being allowed to keep ripping off patients, instead pitching drugmakers as selfless saviors of humanity. They feature soft scenes of drug researchers in white lab coats urgently trying to find new cures, scripted testimonials from patients and of course scenes of drugmakers altruistically aiding poor people.

The American public is dismayed and disgusted by the flagrant greed of drugmakers that are shamefully zooming the prices of medicines into the stratosphere, turning necessities into unaffordable luxuries. As a result, there is a growing demand for Congress to take action to stop the industry's out-of-control gouging.

Hoping to counter this demand for action, drug companies have launched their massive advertising campaign, not only running radio and print ads but also placing ads on Facebook, Twitter and other social media websites. Yet it's not likely that you've seen or heard any of them. That's because drug chieftains don't care what you and I think.  Moreover, they know they couldn't possibly persuade us to let them keep jacking up our prices. So, their "public" relations effort has made the odd and seemingly counterproductive move of sidestepping the actual public, instead narrowly targeting a very tiny audience.

As one CEO arrogantly put it: "We've identified 7,000 Americans who matter," thus dismissing the other 330 million of us as nobodies. "We're focusing on those in policy positions ... to fight structural issues," he sniffed. By "structural issues," he means convincing Congress to take no action to reform the present pricing structure of monopolistic drugmakers, whose guiding corporate ethic is: "Bleed 'em for all they've got."

So this is a surreptitious PR campaign meant to reach only the eyes and ears of policy elites. The goal is to have Congress -- once again -- ignore what the people want it to do, thus allowing the corporate few "who matter" to keep fleecing the many. The word for this is "plutocracy." The industry is spending millions on this corporate medicine show not to protect its notorious profiteering but to protect you from public officials who might try to stop them from overcharging you. It's enough to make you sick.

To find out more about Jim Hightower, and read features by other Creators Syndicate writers and cartoonists, visit the Creators Web page at www.creators.com. Copyright © 2016 CREATORS.COM.