Paul Krugman is wrong: Why his case against Bernie Sanders misses the point

The New York Times columnist's defenses of wonkery are well-intentioned. But politics and policy are not the same 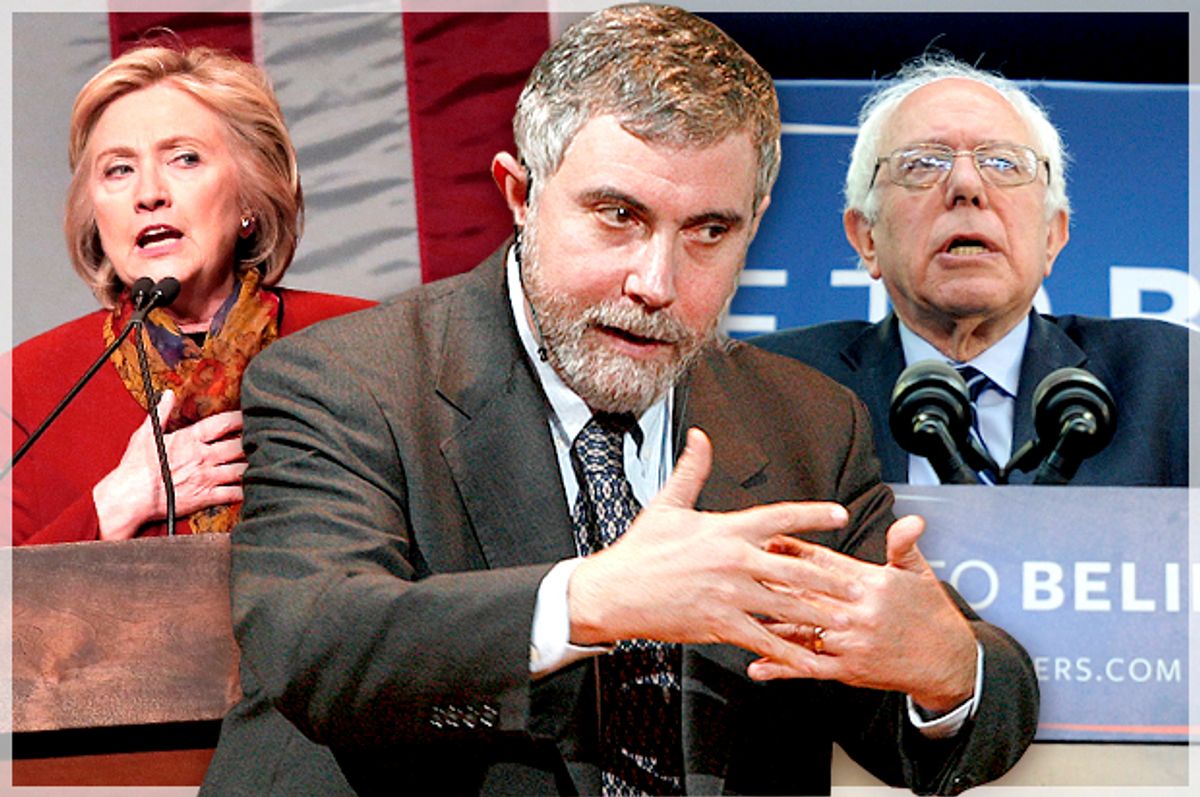 For the first time since his strident defenses of globalization ruffled some fair trade feathers in the 1990s, Paul Krugman is in a protracted debate with the American left.

On the surface, they’re fighting about whether it matters that many centrist and center-left economists are uncomfortable with some of the promises Sen. Bernie Sanders’ presidential campaign has made about how his policies will improve the economy. On a deeper level, however, they’re fighting about what it means to be a Democrat, and whether the party should behave more like a left-wing version of the GOP.

This is an important conversation, and the fact that it’s even happening should make lefties smile. They’re already on Nicholas Klein's third step! For my part, I think both the “wonks” and their leftist critics are making vital points (annoying of me, I know). But they’re talking past one another, too. Leftists believe what’s important right now is politics, not policy. Krugman believes there should be no distinction.

With all due respect to the New York Times columnist, who has been an invaluable ally for the liberal movement for much of the past 16 years, there is a distinction. Good policy does not always make for good politics. There are positive lessons to be learned from the conservative movement’s example. And, right now, it’s politics — not policy — that matters the most.

Before I make make my case, though, here’s a recap of the debate thus far.

The catalyzing event happened in late January, when University of Massachusetts at Amherst economist Gerald Friedman — who says he has “almost no relationship” with Sanders, and who supports Clinton — released an eyebrow-raising analysis of Sanders’ economic platform. Under Bernienomics, Friedman found, the economy would boom in a way it hasn’t since the immediate postwar era. And unlike the current recovery, its fruits would be relatively equitably distributed. More growth, more equality; a win-win.

If that was all that happened, I doubt Friedman’s paper would’ve inspired so much controversy. But what moved the document from the world of economics into the world of politics was the way the Sanders campaign responded to its release. The campaign’s policy director, Warren Gunnels, said it was “outstanding work.” Just like that, it became fair game to hang Friedman’s work around Sanders’ neck — which three former economic advisers to Democratic presidents proceeded to do via an open letter.

It was this analysis, and the campaign’s refusal to back down from endorsing it, that got Krugman so exercised. “It’s a rough time for progressives who don’t believe in magic,” he lamented in a blog post that described Sanders’ policies as “unicorns” (i.e., make-believe). He granted that all candidate platforms “are better seen as aspirational than as programs at all likely to happen.” Still, if we’re gonna aspire, he says, we should do so within reason. This is where his argument is at its least persuasive.

Even though it’s just as likely to be DOA in a GOP-controlled House as Sanders’ plan, Hillary Clinton’s platform, Krugman says, is better. He offers two reasons. First, because Clinton’s plan could “be a useful guide relatively soon, while a program that requires a political revolution won’t.” Second, because the media, if Sanders were the Dems’ candidate, would “portray … as symmetric” his unrealism with that of his Republican opponent. (Which Krugman thinks would be unfair, despite his Sanders skepticism.)

In another post a few days later, Krugman tried to explain why he sees Democrats’ reputation for wonkery as both good in itself and as a political asset. “[T]he reason the joke about facts having a liberal bias rings so true,” he writes, “is that this really has become a defining difference between the two sides of our political chasm.” Whereas the right is beholden to anti-tax extremism, in the progressive movement, Krugman says, “real policy research and political positions have marched hand in hand.”

As a description of contemporary political culture, this all rings true. But remember: At least in theory, Krugman is trying to make a political argument — not just an intellectual one. The problem is that he simply doesn’t; in fact, he barely tries.

He says, for example, that the campaign to raise the minimum wage “has been mightily helped by the research literature showing that higher minimums don’t cost jobs.” It’s true that this research has been influential among elites; you’ll hear it cited in many a blog fight or panel debate. What’s less clear is that this is the reason the public now supports these hikes. A change in public attitudes after the Great Recession seems more likely. (No offense to Nebraska, but I’m guessing Wonkblog is not among the state’s most-read sites.)

Next, Krugman argues that if politics is entirely reduced to “gut feelings that reject hard thinking,” the political landscape will shift even further in conservatives’ favor. “[T]he right is always going to have an advantage.” I’m sure that on many issues — especially ones pertaining to racial justice and reproductive freedom — this would indeed be the case. But would the right also be stronger on economic issues, which are Sanders’ raison d’être? I’m not so sure; class warfare is a powerful motivator, for better or worse.

There’s also one very important reality of American politics today that Krugman, for all his realism, seems to miss: Although the Obama presidency has been successful in many ways, the health of the American left, overall, is abysmal. It’s been decimated on the state level, it’s all but guaranteed to be the House minority until at least the 2020s, and if Antonin Scalia were alive right now, a series of rulings that would have been terrible for liberals, leftists and progressives would likely be coming down the pike.

Oh, and did I mention that we’re one presidential election away from having a President Rubio (or Cruz or Trump) make Speaker Paul Ryan’s massively regressive budget the law of the land? If these are the results of having the wonk perspective determine the course of the Democratic Party, well, let’s just say that people on the left should be willing to hear some new options.

There is one place, however, where Krugman and I are in agreement. When he frets about Democrats following the Republican example and “making support for implausible claims a litmus test of loyalty, declaring that anyone raising hard questions is ipso facto corrupt,” he is right. Without evidence, any such accusations, no matter whom they’re against, amount to bullying; and the suggestion that Sanders' critics must be either corrupt, or secretly conservative, is obnoxious.

But while I’m not accusing Krugman of fabricating these charges, I also can’t remember seeing any — except on Twitter; which, as we all know, is about 95 percent trash. So the most important point isn’t about rhetoric or behavior. It’s about what the progressive movement should be doing right now, today. Krugman recommends a little less aspiration and a little more focus on crafting good policy. His position is not unreasonable or disingenuous; it's just wrong.