"Something bold needs to happen": An in-depth look at millennial America 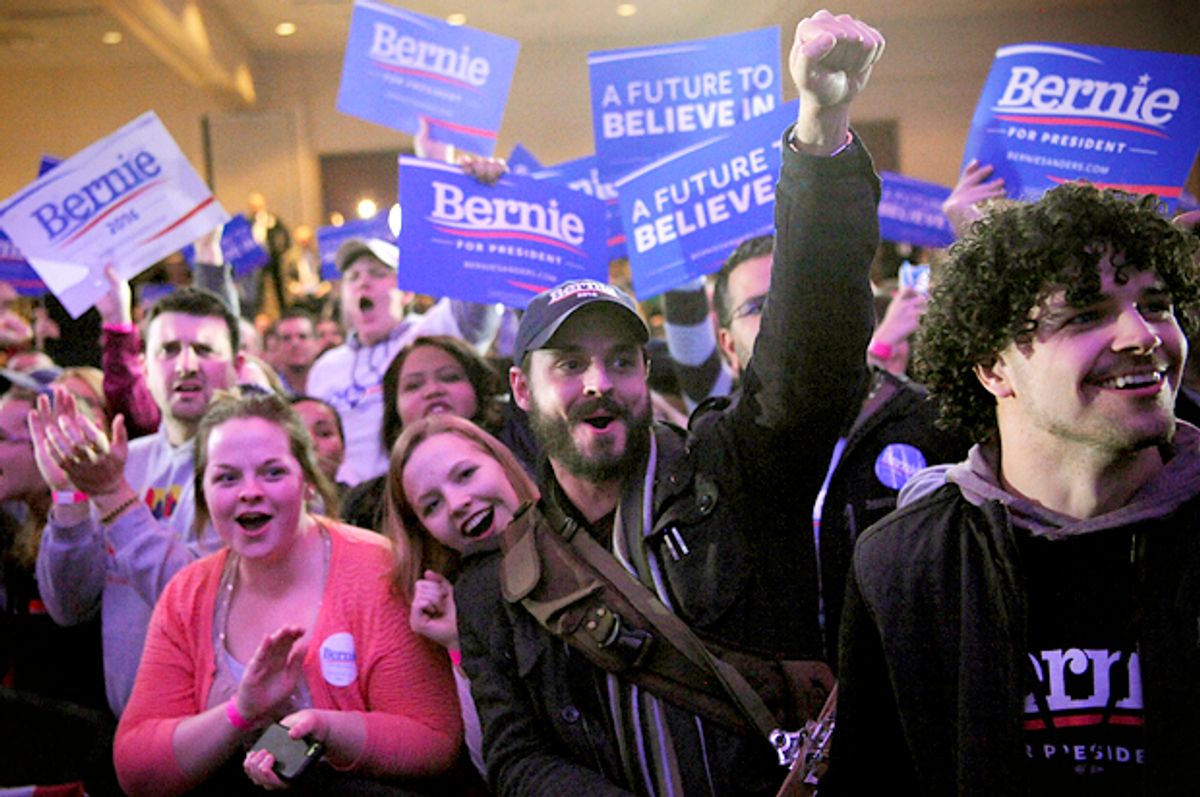 What explains the runaway success Sen. Bernie Sanders' presidential campaign has had so far among young Americans?

Earlier this month, Salon spoke with leading Democratic Party pollster Stan Greenberg about what he learned from conducting focus groups with millennials. "They think the system's rigged," he told us.

Greenberg's findings were intriguing, and they suggested that the next generation of Americans are itching to shake up an economic and political system they associate with corruption, inequality and stagnation.

But as useful as focus groups can be, they also have their limits — which is where "The Next Generation Blueprint for 2016," a new, in-depth survey from the Roosevelt Institute (which also helped produce Greenberg's focus groups) comes in.

Recently, Salon spoke over the phone with Joelle Gamble, national director for the Roosevelt Institute Campus Network, about the survey and what makes young people in America tick. This interview has been edited for clarity and length.

You report a feeling among millennials that the social contract that has been in place since the New Deal is in some ways broken. What do you mean by that?

The "Blueprint for 2016," our survey of 1,000 young people from 160 schools, did give us a sense that there was a desire to reimagine, for a changing America, the basic building blocks of our economic, civic and social well-being, because we felt like the rules as they are right now are just broken. A lot of folks have grown up in an environment where the job market wasn't what it was promised to be. We've graduated or are going to graduate, if we went to college, with a lot of student loan debt. We see a lot of our family members, even ourselves, not feeling safe on their own streets.

So we feel like this contract, this promise between government and its citizens to provide the basic building blocks of our economic, civic and social well-being just wasn't fair, which is why we thought issues like education and the economy and human rights come to the top of the agenda, and why our Blueprint calls for candidates and elected officials to prioritize action in these three areas, not just during their terms, but aggressively in their approach to their first 100 days after the election. Because we believe that these are necessary in order to secure and achieve a vision that embraces the human dignity of everyone.

What is the most important issue to millennials?

It's hard to say there's one issue, because I believe that there was an overall sense of not just one single issue, but a [desire for] larger reform of who gets to rewrite the rules, the sense that the folks who are currently in charge of making decisions that affect us are not being as effective as they can be.

Sixty-four percent of our survey respondents identified decreasing the influence of money in politics as a top priority for the next administration. They didn't always see it as the most likely thing to get done in the first 100 days, but they saw it as one of the most important. Eighty percent of them cared more about a fair and inclusive political process than seeing their own candidate win. So ultimately it's about how rules get made and who gets to make them.

The survey found that K-12 education was an even more important issue to millennials than student loan debt, which cuts against a common criticism of millennials — that they only really care about themselves.

We were a little bit surprised, but pleasantly surprised by this, because student debt is thought of as the biggest college student issue. But because respondents also were thinking about overall how the education system prepares people for a changing economy, their own experiences, as well as those their children will ultimately face, we ended up with a broader set of policies and issues that came to the top.

Ultimately, as we surveyed respondents and as we convened smaller focus groups of young folks to help cull through the results and interpret the data, we realized there were a couple of core values that were driving why young people were supporting education. So, yes, there's this economic component, which of course links directly to debt, but it's also about how people get access to society overall and how they're prepared to engage as citizens. All of these other things are encompassed in how folks viewed education. Being able to give someone a good system at the beginning is really important, not just what they're facing in college.

It seemed to me that, overall, millennials were much more interested in placing the community at the center of their politics than are, say, Baby Boomers, who tend to place more of an emphasis on individualism instead.

I believe that there is a strong streak of valuing collective action within our generation, millennials and Generation Z, the generation that is emerging after them, who we also included in this survey. We looked at economics, and with some of the issues that came to the top, we realized that view of collective action and the importance of everyone being able to work together to achieve goals instead of individualism really came through. Because folks cared about reforming the tax code, but they also cared about how to build strong local economies and the ways in which the economy actually affected them where they were.

So our recommendations reflect not just how one individual interacts with the economic system, but instead how it's shaped in each community: for example, how local businesses can be incentivized to be more representative or how we can expand free community college and trade school programs to help workers evolve with a changing job market. All of these things were reflective of the fact that folks were looking at the areas around them instead of just their own individual experiences.

Along those lines, you found that millennials care a lot about criminal justice reform — including those who were much less likely to get caught up in the system.

Right. One thing that was encouraging was that human rights and looking at the link between criminalization and poverty, looking at reforming the justice system and so on, was a top issue across identity lines. We tried to run crosstabs based off of identity and school type and all sorts of subcategories, and human rights was still a very important category. Folks weren't just thinking about their own experiences. You'd expect black or brown people to identify with this issue more than, for example, white respondents, but that just wasn't the case. Everyone was like, "This is important, not just for me and my own family, but for how we create an affordable and just system and society overall." So it was very encouraging.

It seems there's a growing recognition that the family and the community are necessary parts of rehabilitation.

We called this section [of the report] "Human Rights" instead of "Civil Rights" or "Justice Reform," because we felt like that larger framing of it being about families and human dignity really stood out above anything else. It wasn't just an economic issue, it wasn't just a budgetary issue, it wasn't just a matter of an efficient system, it was really about people and how they're able to live safely and comfortably and equally in American society.

It's been speculated that Sen. Bernie Sanders does well with millennials in part because he supports single-payer health insurance. Do you think millennials particularly care about single-payer? Or is it perhaps more that they appreciate Sanders' implication that even though the Affordable Care Act is in place, it's not like health insurance reform is done?

My thinking on this is that it's about the boldness of the reform and that it doesn't feel like tinkering at the edges, which I think can be very frustrating for a lot of folks who are feeling the brunt of policies implemented in the past or folks who have not yet felt the positive effects of policies that have been implemented.

This clear and unapologetic push for bold reform appeals a lot to folks in my generation, because we've seen a lot of brinksmanship and the excuses that come with brinksmanship, so we really want candidates and elected officials to stand for something that is values-driven and bold, and say that something bold needs to happen, instead of saying, Something bold can happen if X, Y and Z happen, and this may take 10 or 20 years. We see a lot of that, we have to sift through a lot of that, but someone who is taking a principled stance for bold reform has a lot of appeal.

It can feel like the political discourse lacks not just bold ideas, but ideas on a regular basis. Even though, during a presidential election, it's time for people to lay out their policies, a lot of it can feel like more of the same. So I think that candidates who have a bold and brash articulation of an idea that is rooted in values do well with our generation.

Are millennials more open to these kind of bold, sweeping reforms because they're skeptical that the status quo they're inheriting is fundamentally legitimate enough to deserve preserving?

I'm not sure if it's fair from the research we've [looked at] to answer the question of whether it's legitimate or not, but I do think it's pretty clear that they are not resigned to accepting the system as functioning the way it is for the rest of their lives. We're still at the point where we believe that with the right political action and the right leadership that reflects the people most affected by policy, that serious reform can be made to the system. I don't quite see it as an outright rejection of it as illegitimate, but there is a deep distrust of it and a desire to be able to disrupt it. And there's a belief that that can still happen with the right people; with the right collective action that can be achieved.

So it's not that the system itself is wholly discredited — not yet, at least — so much as it's in need of a major readjustment.

Think of it as a realignment. We've gotten off course, and [need] a new injection of people, ideas and a reconfiguring of how folks can engage in the process. Beyond voting, opening up participatory processes and folks taking collective political action can actually move it back on course.