Can Bernie or Hillary actually take on Wall Street and win?

Bernie Sanders and Hillary Clinton talk tough, but how do their policies measure up? 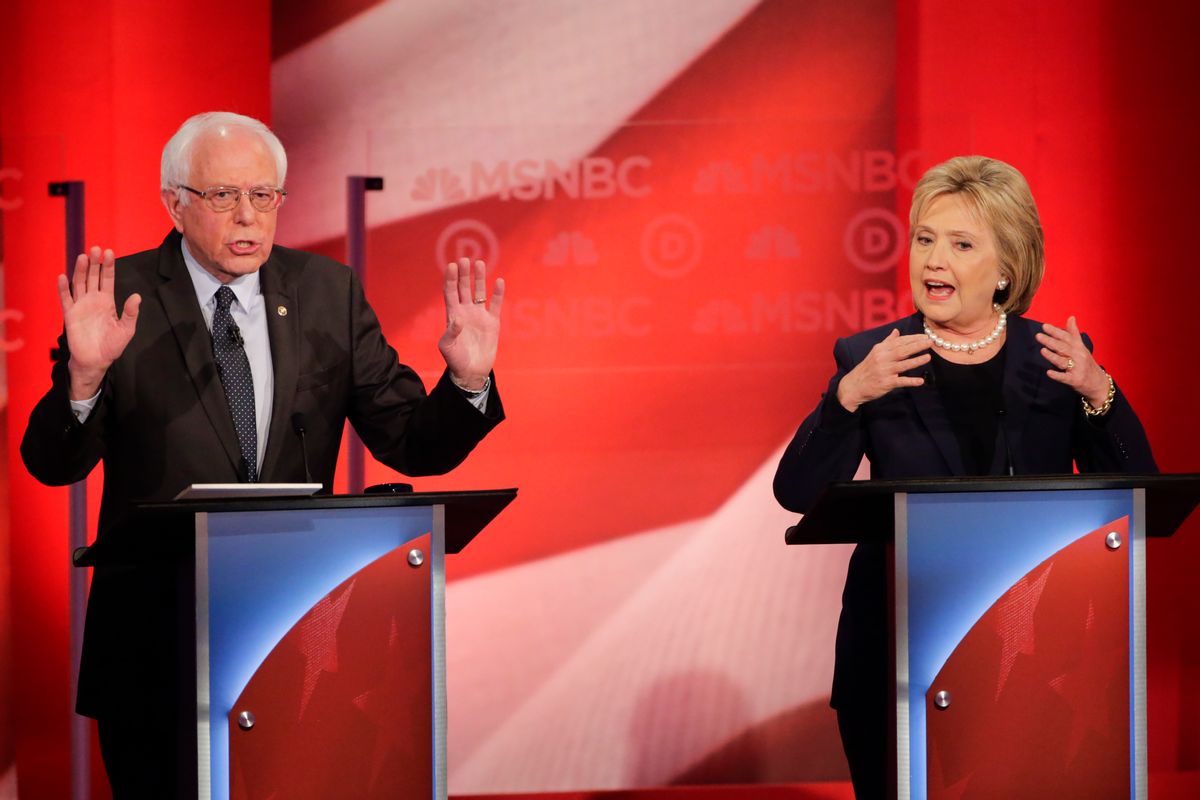 Ed Kane teaches finance at Boston College and is a grantee of the Institute for New Economic Thinking. He studies the dangerous risks posed by big banks and sees the current system as hurting taxpayers and favoring the interests of megabankers and financiers. Recently, the financial reform proposals of Bernie Sanders and Hillary Clinton have gotten a flurry of press. Will either of them make us safer? Are economic experts using their professional expertise to judge them or blowing political and philosophical smoke? Ed Kane discusses these issues and more. This interview was originally published on the Institute for New Economic Thinking’s blog.

Lynn Parramore: The movie 'The Big Short' showed the recklessness of bankers and financiers leading up to the crisis. Yet nobody has gone to jail, proposed reforms are mostly second-order, and the banks have tried to roll back parts of the Dodd-Frank Act. Some of those efforts have been successful, like a rule meant to protect us from just the sort of deals shown in the movie. Do you think the opinion that little has changed is justified?

Ed Kane: Yes, I do. We’ve seen a reform program that favors big banks. Dodd-Frank has hurt small banks and futures commission merchants because it places new burdens of regulation on them such as the need to hire specialized compliance officers. Dodd-Frank is very complicated. Ironically, rather than disciplining big banks, these complications have ended up making big banks more dominant than ever before.

The Act creates new authority to discipline large banks, but the rules implementing this authority are still evolving. In both Basel and the U.S., there has been a tendency to relax proposed rules that the big banks dislike. (See a chart showing how banks have been consolidated.)

The reversal of the rule that you mention — the swaps “pushout” rule — happened in December 2014. Swaps are a type of derivative product that lets financial firms and their clients hedge against risks or bet on an asset’s value. The idea was to make banks do these risky deals in a part of the corporate structure that wasn’t insured by the FDIC, so taxpayers would not be on the hook.

While megabankers fought this provision, it seemed a very reasonable way to confront the possibility that a troubled bank might use swaps to shift losses to the FDIC if it was failing. Reversing this rule was a blatant exercise of big bank lobbying power. I was surprised not just by how politically strong these firms’ leaders feel, but how unafraid of popular disapproval they have become.

LP: How would you reform Wall Street?

EK: We need more than just tougher rules. We need reforms in corporate governance. Tougher capital requirements, liquidity requirements and reporting requirements at banks don’t directly address what megabanks owe to the rest of us.

LP: What do the banks owe us, exactly?

EK: You and I have become unthanked equity stakeholders in our country’s largest banks. We have been forced to provide a massively valuable guarantee for giant banks because authorities will always be afraid to let them fail. We are contributing to bank profits because we are forcedto act as investors of last resort. That’s not how investing usually works! Normally, suppliers of equity have a limited liability but an unlimited possibility for gain. But U.S. citizens’ stake in big banks reverses things. We have unlimited liability and it’s hard to see that we get much in return.

LP: How did we get forced into this unenviable position?

EK: Bank managers are very smart. They know how to accumulate political power and how to exercise it. They stand ready to exploit any advantage they can get from taxpayer guarantees in the various markets in which they operate. In my view, federal courts must eventually see that it’s wrong to let stockholders and managers keep profits that megabanks earn from not paying a fair price for taxpayer guarantees. Stockholders and taxpayers both deserve a fair claim on profits at these banks. In reality, taxpayers are abused minority stockholders. We need to get this recognized by the courts and legislatures of the world.

Then bank managers would have to face the fact that they owe taxpayers the same ethical obligations —of competence, loyalty, and care—that they owe to stockholders.

LP: Do you think that the Wall Street reform proposals discussed by presidential candidates have any chance of working?

EK: Bernie Sanders says he wants to break up too-big-to-fail institutions. I need to know into what pieces? By what principles? He’s not telling me anything I can analyze. Size isn’t the only problem. It’s politically, economically and administratively difficult to let complex institutions fail. What would be his size limit? What pieces does he think can be pulled apart without harm?

The idea of breaking up the banks resonates with the public who are justly angry — and they should be afraid that megabank bears are going to maul them again. They sense that most of what they hear about fixing things is just talk. It worries me when Senator Sanders talks about the Federal Reserve as the “engine” of the banking industry. That’s a terribly defective metaphor. I don’t get it! The Fed doesn’t drive the banking industry. The banking industry drives the Fed. When he talks about stricter oversight of internal conflicts of interest at the banks, I wonder whether he is equally prepared to address conflicts of interest in government.

It is absurd for him to talk about preventing too-big-to-fail institutions from accessing the Federal Reserve discount facilities. The lender of last resort is a very important function of any central bank. The problem he should try to fix is to make large banks pay taxpayers a fair price for the credit support the Fed gives them. The problem with campaigners’ bullet-point financial reform proposals is that they are either too simple or too vague.

Take Hillary Clinton’s program. She has talked about a new “risk fee” for large financial firms. But she proposes to tie it to the extent to which a bank uses short-term funding to finance its operations. She should be talking about the value of the implicit government guarantees a bank receives. As taxpayers, the government needs to measure our equity position and collect fair dividends on our loss-absorbing position. I would ask officials to force megabanks to estimate taxpayers’ equity stake in their firm and to pay dividends on it quarter by quarter. That would be the right way to set the fee. Hillary Clinton doesn’t detail the scale or structure of the fee beyond addressing the extent of short-term funding.

She goes part way toward Senator Sanders in proposing to give regulators more power to break up financial firms. But federal regulators have a lot of authority already. The key is to give them the incentive to use that authority. When a bank is in distress, fear of disrupting the system becomes their dominant concern.

LP: There’s an argument going back and forth between Bernie Sanders and Hillary Clinton about shadow banks — which include hedge funds, money-market mutual funds, mortgage originators and other lightly regulated financial institutions. What would you do about the risks posed by shadow banks?

EK: Shadow banks are a moving target. Officials can’t analyze the problems they pose fast enough. Besides identifying relevant innovations, you have to demonstrate how their terms might be putting taxpayers on the hook for future losses. Researchers need to give this a lot of thought. I have seen almost no research on methods that could isolate the public-interest problems raised by the newest wrinkles in financial engineering.

LP: There has been a lot of noise about something called repurchase agreements or repos. What are repos and why should we care about them?

EK: Repos are contracts for the sale and future repurchase of a financial asset, such as Treasury securities. There were good reasons they got going in the '60s and '70s, but now these schemes are little more than another shadowy set of contracts that large banks use to benefit from unpriced implicit federal guarantees. Repos are now mostly a way to lend large amounts of securities to firms that want to use them as collateral in another contract.

Borrowed collateral provides a convenient way to provide comfort to the borrower’s counterparties in the follow-on contracts. But I can see no good reason for the Fed or the Treasury to subsidize repo activity by expanding the supply of Treasury debt or to increase Fed repo activity to alleviate an alleged shortage of high-quality collateral. Collateral is a substitute for due diligence by a financier — that is, actually knowing whom you are doing business with and whether they have the character and capacity to pay you back. We need more due diligence, not less.

Banks are lobbying the government to expand the supply of high-quality collateral because they want to be able to lend and borrow securities to use as collateral at a subsidized price. They’ll package their proposals not as ways to earn fees without having to perform due diligence on their customers, but as ways to improve liquidity (i.e., expand trading) in thin and therefore choppy markets.

But this is smoke and mirrors. If they get the subsidy they seek, no one will be tasked to tell us what this surge in Fed repo activity actually cost. Bottom line: there’s just not enough concern for developing ways to block the expansion of the federal guarantees in any presidential candidate program of financial reform.

LP: A lot of pundits and professional economists have been weighing in on the financial reform plans of candidates like Sanders and Clinton. Paul Krugman, for example, has strongly stated his preference for Clinton’s proposals to reform Wall Street. You’ve noted the problem of lack of detail in the plans you’ve seen. As an economist, does that make it difficult for you to access their merits?

EK: It does. These proposals lack the specificity to allow me, acting only as a professional economist, to draw many conclusions.

LP: So could something other than the economic merits of the proposals enter into the assessments we are hearing?

EK: Surely, ideology and partisanship play a huge role. Social scientists have a term, “economics imperialism.” All too often, an economist will address a set of economic proposals or ideas not as an economist but as an amateur (and often undertrained) philosopher or political scientist.

Professional economists tend to fear the word “socialism.” Putting this label on himself may have provoked at least some of the negative response Sanders’ proposals have received from economists in media outlets. Crony capitalism is not a great system, but it’s the cronyism that needs to be fixed, not private ownership. Socialism seems to make the problems of corruption, favoritism and inefficiencies in government even worse.