John Kasich makes play for the misogynist vote: He wants women out of the doctor's office and into the kitchen 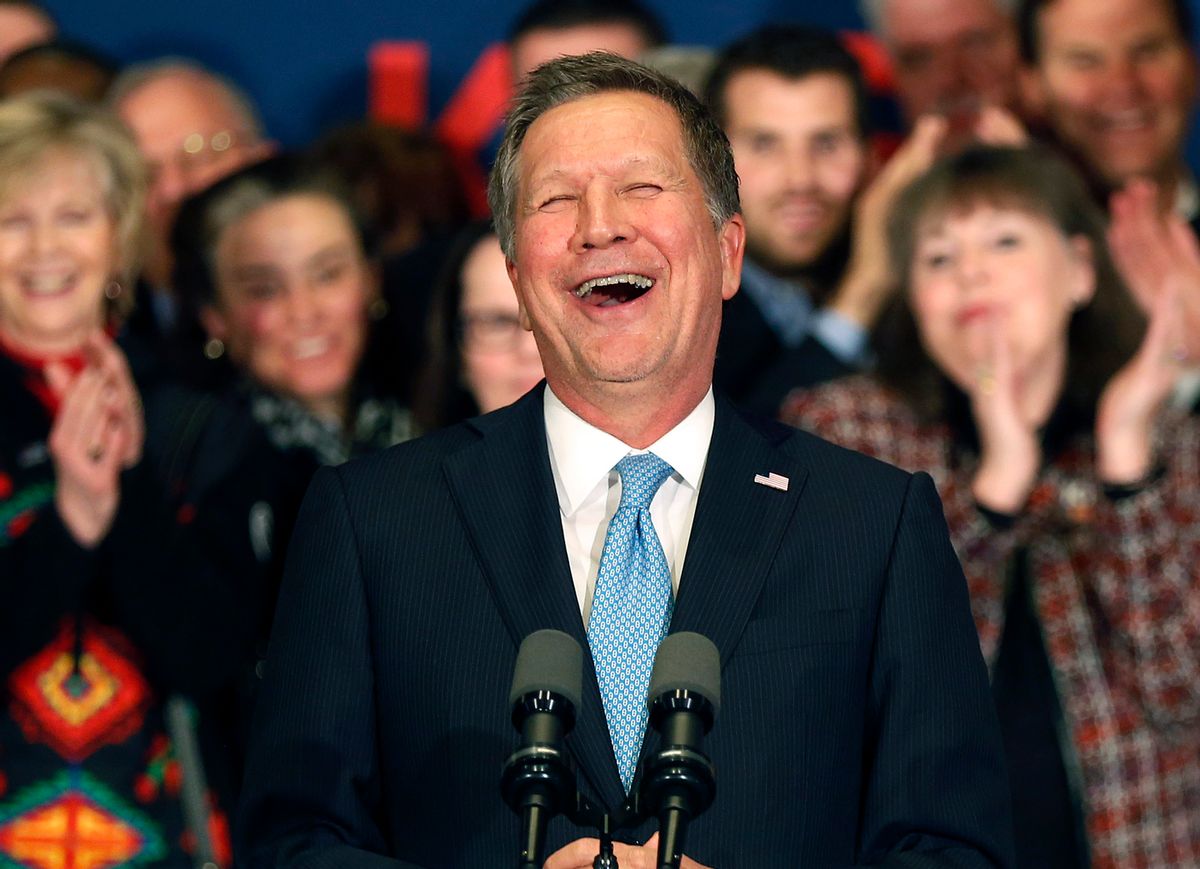 Gov. John Kasich is still in the race and still trying to frame himself as the moderate, compassionate Republican, but on Monday, the governor issued two glaring reminders of his very un-moderate contempt for women. During a campaign event, in a video that went viral almost instantaneously, Kasich made a comment about his female supporters that was as bizarrely unnecessary as it was condescending.

"How did I get elected?" Kasich said. "I didn't have anybody for me. We just got an army of people, and many women who left their kitchens to go out and to go door to door to put up yard signs for me." He did not specify if they untied their aprons or put on their shoes.

Later, a woman in the audience decided to confront him, sort of, on this. "I'll support you," she said. "But I won't be coming out of the kitchen."

"I gotcha," he replied. It read like a morality play about life as a female conservative, an on-the-nose illustration of how you'll never get anything more than condescending head pats if you keep supporting men who refuse to offer basic respect in return.

The whole thing would just be a comical distraction, if it weren't for the fact that Kasich applies this loathing for female independence to his policy choices. The same day he was spinning out this fantasy of women living a kitchen-centric lifestyle, he also signed a bill drastically slashing access to affordable contraception services for women in his state.

The bill doesn't name Planned Parenthood, but it's the clear object of a ban on state funding for health services for places that offer or even just "promote" abortion, a procedure that over a million women get every year nationwide.

The funding in question is not for abortion, however. Abortion, as is customary these days, is just the word invoked to justify what are actually cuts to a wide array of reproductive health services that make it easier for women to have sex without getting sick, pregnant on accident, or even dying: Contraception, cancer screenings, STI prevention and treatment and other gynecological services. The hostility towards women underpinning these cuts is made even more evident in this case, as funding for prenatal programs and programs to prevent domestic violence were cut.

The message of today's Kasich campaign couldn't be clearer: Women belong in the kitchen, not the gynecologist's office. Though you can get day passes from your culinary prison if you're willing to pass out fliers for the Kasich campaign.

Kasich's office, of course, denies ill intent towards women in the cutting of services, claiming that there are other places women can go for "new born babies, infant mortality, expectant mothers, violence against women, and minority HIV/AIDS". (Notice that they aren't even pretending to support contraception any longer.)

The reality, however, is that these kinds of defunding schemes are extremely effective at pushing women, at least low income women, into the kitchens that Kasich dreamily imagines as their natural homes. A recent study published in the New England Journal of Medicine, found that cutting Planned Parenthood's funding, even if it's redirected to other agencies, reduces women's contraception use, especially when it comes to the most effective forms of contraception. The study focused on Texas, which has been cutting funding to Planned Parenthood for years now.

The result was a surge in births for women who had previously relied on government subsidies for reproductive health care, though it's doubtful that many of them lived up to Kasich's dreams by donning pearls over a shirtdress before putting on a pot roast for their hardworking husband. The ugly fact of the matter is that unwanted child-bearing for low income women just makes it harder to escape poverty. Pushing women into the kitchen, in our day and age, usually comes with a side dose of pushing them and their children into poverty.

Admitting that contraception cuts just lead to more unintended births is politically unsavory for anti-choice legislators and politicians. (They prefer the myth that it will cause women to swear off sex until their prince comes along and marries them into the kitchen of their dreams.) The result of the Texas study is that one of the researchers, Rick Allgeyer, was pressured by the Republican-dominated Texas government into quitting his job at the Texas Health and Human Services Commission.

Puncturing the cheerful hausfrau fantasies of Republicans like Kasich is a dangerous job these days.

This is hardly the first time that the contempt for women underlying Kasich's policies came bubbling to the surface during a campaign event. Back in October, Kasich, seemingly annoyed at a female college student for her eagerness to ask him a question, decided to put her in her place.

"“I’m sorry, I don’t have any Taylor Swift tickets," he said, while laughing at her.

Kasich isn't doing well in the presidential race, but, sadly, it can't be said that it's because of his attitudes towards women. Nearly every candidate in the race has expressed similar beliefs that contraception services at Planned Parenthood should be eliminated, even if they don't acknowledge that obvious end goal, of derailing women's lives with unintended pregnancy, that such a policy promotes.

The one candidate who has been less than full-throated in his hatred for the organization's contraception funding, Donald Trump, just appeals to the misogyny of the conservative base in a different way, by objectifying every woman he comes across and lobbing misogynist insults at any woman who dares question or stand up to him.

Kasich's days are numbered in this race, but, as Monday's events remind us, the surge of anti-feminist legislators and governors across the country are as much, if not more, of a threat to women's rights than the presidential candidates on their own. Kasich doesn't need to be in the White House to push the back-into-the-kitchen agenda, as the women of Ohio, especially those who just lost their gynecological services, could be the first to tell you.