Obama must fulfill his Gitmo pledge: Eight years is far too long to make campaign promise of closing prison a reality 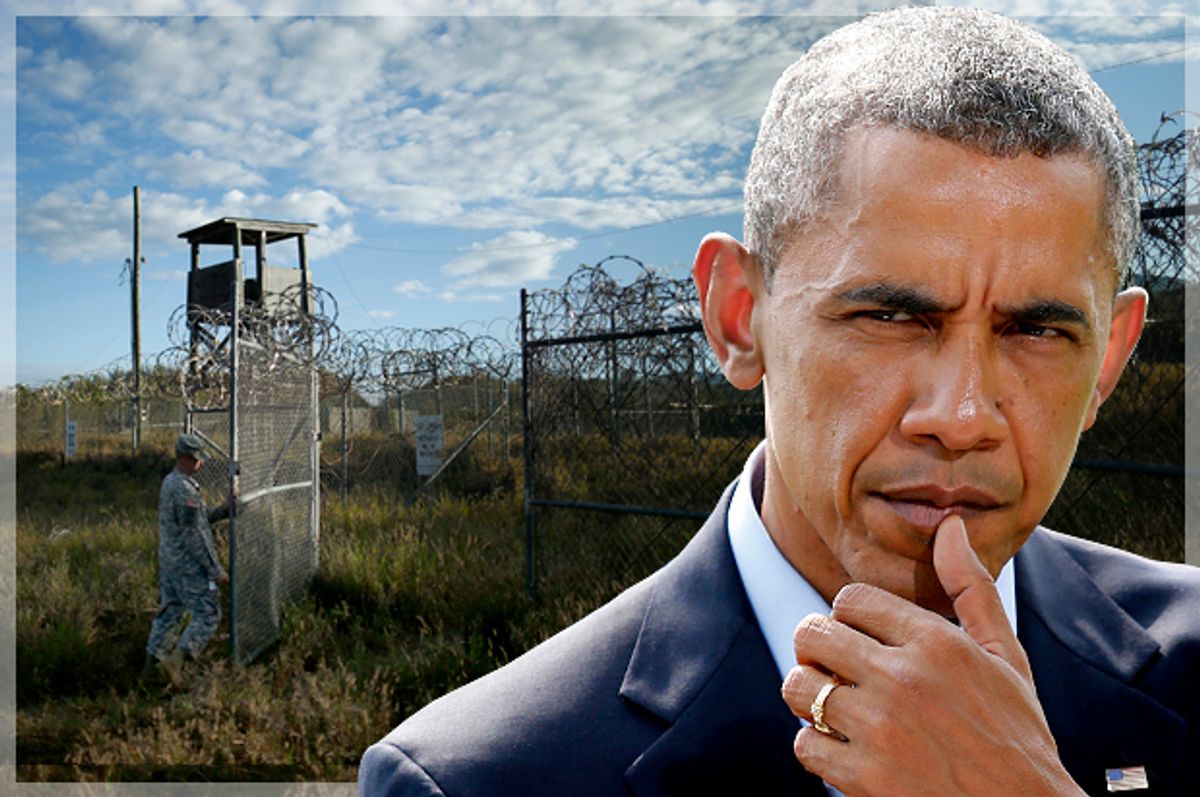 "We're going to close Guantánamo. And we're going to restore habeas corpus," then Senator Barack Obama told a Texas crowd in June 2007. "We're going to lead by example — by not just word, but by deed. That's our vision for the future."

Obama ran for president on this promise; his pledge to close the detention camp was at the heart of his campaign.

Just a week after winning the election in November 2008, President-elect Obama released his plan to close the prison. There were approximately 250 prisoners in Guantánamo, most of whom faced no charges or trial. Many had been cleared for release.

A mere two days after entering office, on Jan. 22, 2009, the president issued an executive order calling for the detention camp to be closed. The initiative appeared to have momentum. Human rights advocates thought they were on the verge of a breakthrough.

Yet here we are, in February 2016, more than eight years after Obama pledged to close Guantánamo, and it remains open.

This week, Obama sent Congress his plan to shut down the prison once and for all. "For many years, it's been clear that the detention facility at Guantánamo Bay does not advance our national security, it undermines it,' he said in an address. "It's counterproductive to our fight against terrorists, because they use it as propaganda."

This is an undeniable fact. The Tampa Bay Times' fact-checking website PolitiFact rarely gives statements a completely true designation, but, after speaking with numerous experts, concluded that the argument that Guantánamo is "a 'key component' of terrorist propaganda" is indeed correct. Even Human Rights First, which has been accused of being biased in the interest of U.S. foreign policy, has said the same.

Obama's plan is to send 35 of the 91 Guantánamo prisoners who have already been approved for transfer to other countries, and to accelerate the review of the remaining 56 detainees. The plan calls for transferring prisoners who are deemed more dangerous (although most, if not all, have never had a trial) to domestic prisons, proposing sites in South Carolina, Kansas and Colorado.

The Pentagon is trying to sell the plan to conservative skeptics by noting that taxpayers would save $65 to $85 million less each year to house Guantánamo prisoners in the U.S.

In his speech, Obama pointed out that there was once bipartisan support to close the prison. Since then, the Republican Party has lurched so far to the right that presidential candidates are competing to see who supports the most extreme and flagrantly illegal forms of torture. Billionaire real estate mogul Donald Trump says he would "absolutely" bring back waterboarding, and much worse. Trump's equally far-right rival Ted Cruz also has called for using waterboarding — although he is less obnoxious, and hence gets less media attention.

In the immediate wake of the announcement on Guantánamo, fellow Republican presidential candidates John Kasich and Marco Rubio criticized Obama's plan. Kasich, the most moderate of the remaining presidential hopefuls, said he "profoundly disagrees." Rubio flatly declared "We are not going to close Guantánamo." He called the prisoners "enemy combatants" — although, again, most have never been charged or given a trial — and added, "Not only are we not going to close Guantanamo, if we capture a terrorist alive, they are going to Guantanamo and we are going to find out everything they know."

Given this extreme climate, President Obama has frequently blamed Republican obstruction for the delay in closing Guantánamo. Yet, in this case, the definition of "obstruction" must be interrogated, because Obama has long had the authority to shut down the prison.

As Salon has noted in its reporting on Guantánamo, Caroline Fredrickson, president of the American Constitution Society for Law and Policy, has stressed that it is "really important for people to remember is that President George W. Bush opened Guantánamo on his own say, without Congress, without any authorization, any legislation to do so." She explains that Obama "is fully within his executive authority to close Guantánamo without going through Congress, because of that very same power that George W. Bush used to open" it.

Furthermore, lawyers who work with the detainees told The Guardian that "they hold Obama and his senior officials personally responsible for the lack of action." The British newspaper reports that prisoners' attorneys "see Obama's criticism of Congress as a smokescreen to obscure the fact that a primary source of the current inertia lies not on Capitol Hill but within his own administration."

This fact is little-discussed in conversations surrounding the prison, but is crucial. That is to say, the evidence suggests Obama is using Republican opposition as an excuse.

Obama has been reluctant to take executive action on issues like Guantánamo. He says he wants bipartisan consensus. At the same time, however, Obama has demonstrated that he is perfectly willing to use his executive authority on belligerent foreign policy initiatives.

The president has proffered no public protestations about approving the weekly "Kill List" — known euphemistically as the disposition matrix — and ordering the extrajudicial assassination of people, including U.S. citizens like Anwar al-Awlaki and his 16-year-old son Abdulrahman al-Awlaki, who were never charged with a crime and never saw a trial. Obama cited habeas corpus as a reason to shut down Guantánamo (and rightfully so), but abandons the fundamental legal principle when it comes to his drone war.

Obama has pursued numerous troublesome — some might even say criminal — policies around the world. He oversaw the NATO bombing of Libya, which destroyed the oil-rich North African nation's government and plunged it into chaos, in which extremist groups like al-Qaeda and ISIS have grown. He killed thousands of people with his secretive drone wars, an unknown number of whom were civilians, terrorizing civilian populations in Pakistan, Yemen and beyond. He steadfastly backed and armed Israel in its brutal summer 2014 war on Gaza, which left thousands of Palestinians dead, the majority of whom were civilians, and reduced the impoverished strip to rubble. He and U.S. allies have fueled the bloody civil war in Syria, and he has supported the Saudi-led coalition in its destructive and largely indiscriminate bombing campaign in Yemen.

At the same moment, nonetheless, Obama has made some foreign policy breakthroughs. He helped reach an historic nuclear deal with Iran, lifting nuclear-related sanctions — an important step toward peace in an otherwise truculent Middle East policy. And, in response to pressure from the rest of Latin America, the Obama administration moved toward rapprochement with Cuba, a tiny country the U.S. has waged a relentless covert war against and imposed a unilateral embargo on — against the will of the international community — for six decades.

Closing Guantánamo certainly will not bring back all of those killed in U.S.-backed wars, but it could be one of the few positive achievements in Obama's foreign policy legacy.

Urging Congress to consider his newly proposed plan, Obama said, "given the stakes involved for our security, this plan deserves a fair hearing — even in an election year." He added, "I don't want to pass this on to the next president."

Obama does not have to pass it on to the next president — or to Congress, for that matter. The president should heed his own advice. If he is serious about closing Guantánamo, he will do it. President Bush acted unilaterally, with little regard for Congress; President Obama can do the same.