The Senate GOP's idiotic SCOTUS obstruction: Why Republicans are shooting themselves in the foot 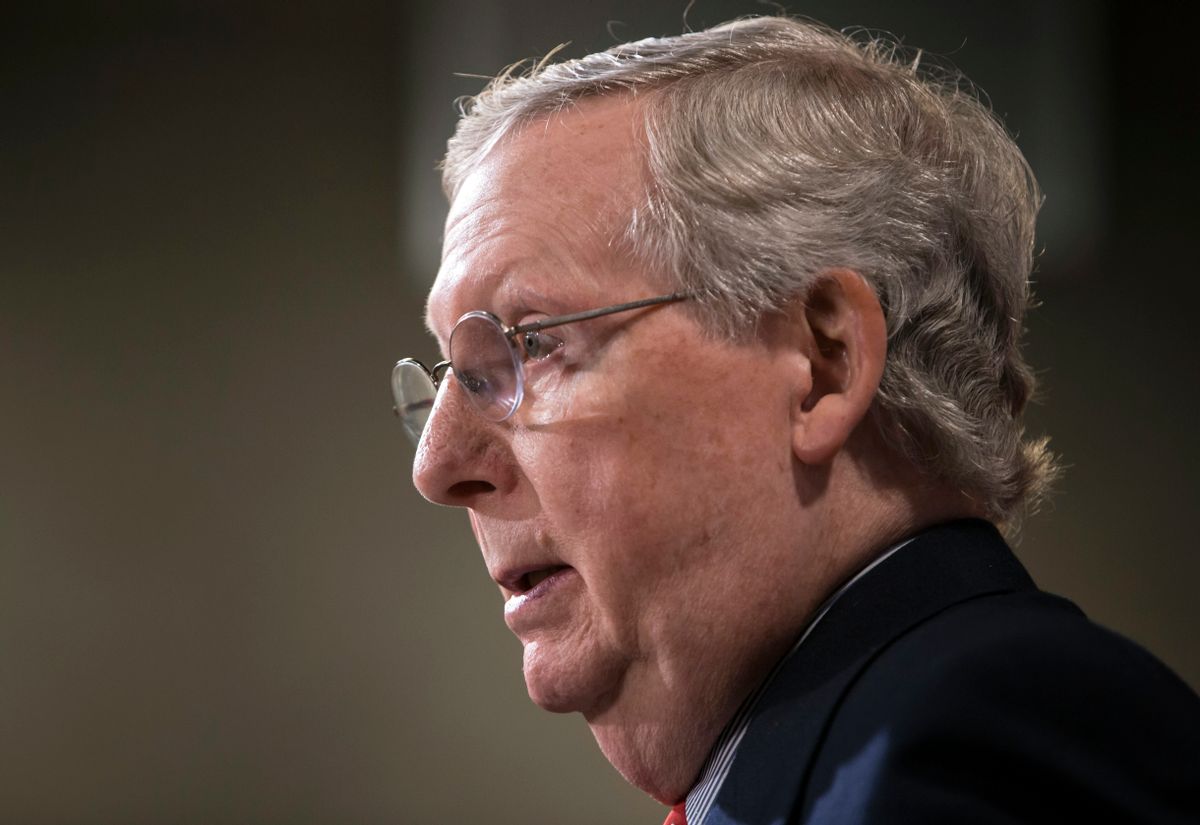 Following a closed-door session in Congress today, top ranking Republicans announced that the Senate Judiciary Committee will not hold hearings on President Obama's forthcoming Supreme Court nominee to replace the late Antonin Scalia. It was the Senate's first full day back in session since Scalia's death, so obviously the Senate Republicans didn't waste any time telling the so-called "lame duck" president to take his nominee and go straight to hell.

According to Talking Points Memo, Senate leadership stood in lockstep on the matter.

"We believe the American people need to decide who is going to make this appointment rather than a lame duck president," said Majority Whip John Cornyn. [...]

Sen. Lindsey Graham said that "there's no use starting a process that's not going to go anywhere and we are going to let the next president decide," when asked why there would be no hearings. [...]

"Presidents have a right to nominate just as the Senate has its constitutional right to provide or withhold consent. In this case, the Senate will withhold it," McConnell said. "The Senate will appropriately revisit the matter after the American people finish making in November the decision they've already started making today."

The mission, of course, is to roll the dice and hope for a Republican president to be elected in November. It's a risky gamble for the GOP, especially considering the myriad possibilities for blowback. Among them:

• The obstruction could be the last straw for American voters who are fed up with the gridlock and the do-nothing Congress, potentially tipping the balance in the upper chamber in favor of the Democrats.

• Along those lines, the Republicans are so obsessed with sucker-punching President Obama at every turn, they're willing to risk the very real possibility that the Senate will switch to Democratic control -- and, from there, who knows? What if Bernie Sanders wins the Democratic nomination and then the presidency? You have to imagine that whoever he nominates in this scenario is a hell of a lot more liberal than whoever Obama could convince a Republican-controlled Senate to confirm now. They’re willing to risk this eventuality? Brave -- and dumb -- of them.

• The president could simply nominate a new justice during the next recess, as long as it lasts three days or longer, according to Senate rules. In that event, says Lyle Denniston from SCOTUSBlog, the president could select a nominee that's wildly popular, forcing the Senate's hand when it returns to work. The next lengthy recess will begin on July 18 and last through Labor Day. This is probably the least likely option and would ultimately come down to how bold the president is feeling these days. In other words, if the president's "No F*cks Left" posture continues through the Summer, it might be within the realm of possibility.

There's never been a better illustration of how badly the Senate GOP hates Obama. They're willing to risk the nomination and confirmation of a much more liberal jurist by the next president, solely for the personal adrenaline rush of spitting in Obama's face. It's just stupid. The latest Pew poll indicates that 56 percent of Americans want the Senate to do its duty by offering advice and consent on Obama's nominee. Additionally, 56 percent of independents agree that confirmation hearings ought to be held as usual. Of course, it's not the first time the GOP has turned its back on overwhelming public option. (The Republicans filibustered expanded background checks despite 92 percent popular support from actual gun owners.)

McConnell and the Senate GOP are potentially inciting the wrath of a majority of Americans in order to win the privilege of doing exactly what they've done for eight years: crowing to Fox News and AM talk radio about how they stuck it to the black president.

While they've always done this, there's an additional layer to the anti-Obama hysteria here and it's mostly about the GOP's nationwide effort to clamp down on what happens inside American uteri.

Make no mistake, this is partly about obstructing Obama, but the abortion debate can't be overlooked -- nor can the unhinged anti-choice zealotry of the radical far-right. As we all know by now, these religious extremists believe abortion is a holocaust against American babies, and they don't care about smart politics or the finer details of Senate process stories. All they care about is this: if the balance of the Court shifts to a solid left-leaning majority, there's no chance Roe v. Wade will be repealed within our lifetimes, if at all. Senate leadership knows that the anti-choice movement will unleash its wrath on any Republican who supports speedy, constitutionally mandated hearings on Obama's nominee.

So, it comes as no surprise that McConnell defied popular opinion and risked an entire menu of downsides at the bidding of the most radical voices in his party. The next move is up to the president. It's unlikely Obama will back down in the face of McConnell's well-worn trickery, so in addition to an increasingly contentious primary season, we can expect to see many more proverbial battlefield nukes hurled back and forth from either end of Pennsylvania Avenue.