The truthers are out there now: “The X-Files” revival failed the show’s mysterious beauty 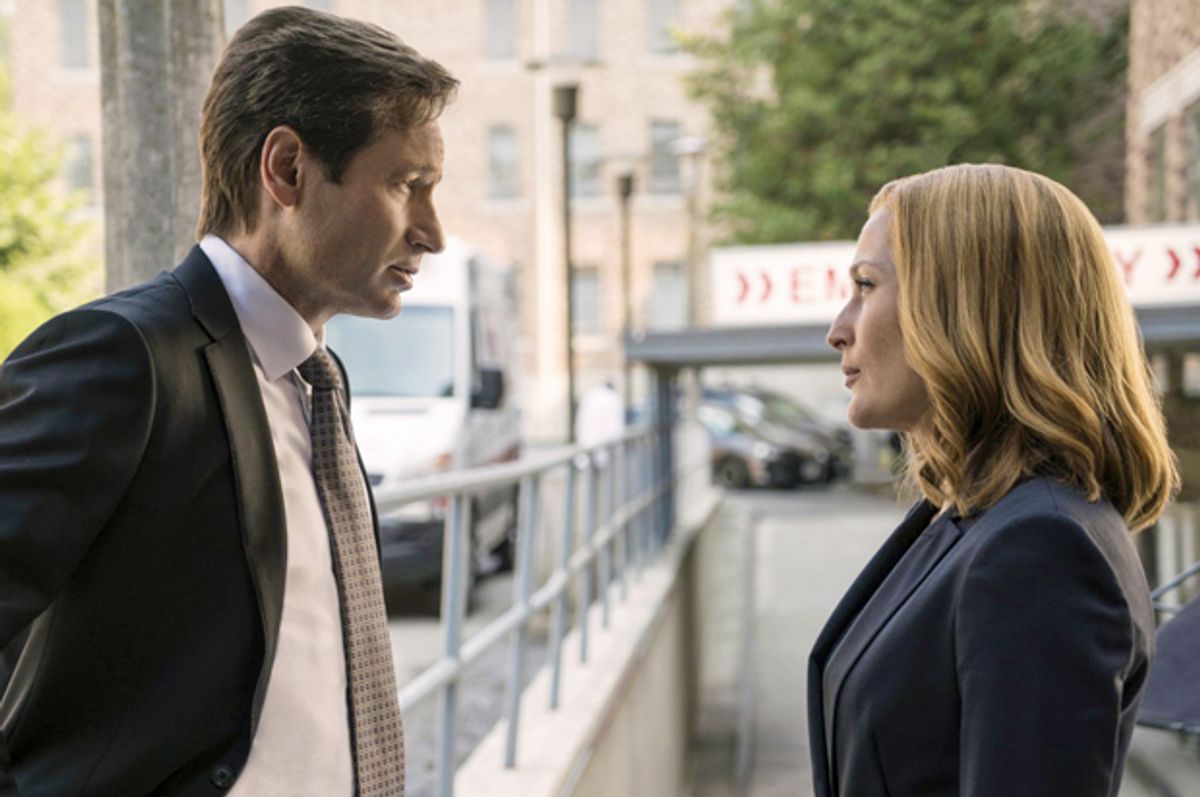 David Duchovny and Gillian Anderson in "The X-Files" (Fox)
--

Last night’s “The X-Files”—the final episode of the six-episode “event series” that saw the 1993 show return for a swansong two decades later—was an abject mess. “My Struggle II,” written and directed by series creator Chris Carter, was riddled with weaknesses, both structurally and ideologically. Given how messy the season’s opening episode was—that one was just “My Struggle”—it’s hardly surprising that in an attempt to wrap things up for this iconic series, Carter pulled every bell and whistle he could find, and then sourced several more on the non-branded Internet just to be sure. (Last night’s episode included a site called phonefinder.biz—a Find My iPhone stand in that conveniently has a desktop icon on Mulder’s computer. It ties with “The Good Wife”’s ChumHum for the most idiotic technobabble brand names to make it to television.)

It is so often the case with brilliant creators that they seem to lose sight of why their creations got so popular and beloved in the first place—on franchises as massive as “Star Wars” and as relatively niche as Fox’s “Sleepy Hollow.” What’s incidental to a showrunner or a director is of paramount importance to its fans. Last night’s finale was in fact crammed with winks and nods that “The X-Files” fans would notice—the repetition of “science fiction,” and David Duchovny’s Fox Mulder noting the Cigarette Smoking Man’s “musings,” hearkening to the title of one of the series’ most famous episodes—but in a kind of obtuse perversity that I have come to expect from Carter, fails to deliver on what makes “The X-Files” special, important, or powerful. So much of the show’s gestalt was about smallness—about the overlookability of the surreal and fantastical; the miniscule efforts of two agents lost somewhere in America against vast unknown forces; the unspoken, unnameable, but entirely undeniable energy between Mulder and Scully (Gillian Anderson), two individuals who were so powerfully pulled to each other that they made their own little planetary system, orbiting around each other with intense gravity.

That quality of intimacy was exaggerated by the show’s incredible length and breadth—nine seasons of regular episodes, with over 20 hourlong installments in each. This could not be a show about vast conspiracy, though it attempted to be—in often thrilling ways—for the first several seasons. Faced with hours and hours of lived-in storytelling, “The X-Files” eroded down to its basic components, worn through by time and exposure. That sounds tragic, but it was anything but; procedurals are comforting and essential precisely because they match the stubbornly slow pace of our own lives.

The six-episode event series was always going to be running against the grain of “The X-Files” true nature, both in how short it was and how much pressure it faced. Bringing together a reunion in the face of 20 years of ripening fan nostalgia isn’t easy; making a worthwhile season in six episodes is arguably even harder. The result, especially in the first and last episodes, were ungrounded plot fireworks that felt nothing like the show, having neither earned it through years of searching and tension nor executed it terribly well. Carter, like George Lucas before him, was too enamored of the special effects available to him with more money and new technology to remember why the story he’d first told mattered at all. The cold open of “My Struggle II” ends with Scully’s face distorting into that of an alien, with an uncanny valley realness that feels like a great big claxon warning you to stop watching.

There are many worthy arguments to be made here—about Carter letting other writers adapt his characters, as Lucas finally allowed J.J. Abrams to do; about the price of nostalgia and the quality of reboots; about trying to do too much with too little. But what struck me, watching these six episodes, is how poorly Carter’s politics are served by bigness, especially when compared to the other work being done on television in 2016. Last week’s episode “Babylon” revolved around a radical Islamist terrorist cell in Texas, in what ended up being the most patronizing, most dismissive way possible—using an unexamined narrative of terrorism as a way to provide spiritual insight for the white characters, at least in part by putting a Muslim character in the Jesus role in an imagining of the Pietà. The rest of the episode presented some pretty deft storytelling—which made the cluelessness of the terrorism subplot all the more perplexing. At no point did the lived reality of the quandary of domestic terrorism sink in for any of the characters; the ones to whom it presumably mattered most were all being used as mere props.

“My Struggle” and “My Struggle II” introduce Tad O’Malley (Joel McHale), an ultra-conservative talk-show host that has been conspiracy-theorizing on aliens, government conspiracy, and the end of days on an odd little YouTube-esque show. Tad sucks up to Mulder, flirts with Scully, and believes in aliens—so far, so good—but in last night’s episode, as the shit hits the fan, Tad’s disturbing side kicks in. He believes in chemtrails, distrusts vaccines, and disseminates this widely; what is worst of all, in a show that spotlights Dana Scully, paragon of reason, is that Carter’s script proves him right.

In earlier seasons of the show, Mulder’s government conspiracies leaned towards a distrust of the Department of Defense following the psychic weight of the Cold War. Things like suspicious vaccines and chemtrails were discussed. But because of the pace—and because the show trafficked in exploring the nature of conspiracy and belief—it fit together as a narrative. The speed of this event series—and Carter’s propensity for splashy fabulism—has delivered a far less nuanced, and as a result, far more troubling vision of government conspiracy. “My Struggle” and “My Struggle II” read like poorly conceived catastrophe fiction written by a tinfoil-hat wearing moon landing truther.

Perhaps that wouldn’t be so bad in another era. But right now—in 2016 America—all this does is give voice to some of the country’s worst impulses, its most xenophobic, anti-community, and anti-rational reactions. Last year, a measles outbreak hit Disneyland because anti-vaxxers destroyed the herd immunity necessary to prevent the illness. The leading presidential candidate for the GOP has suggested banning Muslims from entering the country. And for years now, we have been subject to conservative cable news’ manipulation and rebranding of the truth for its own self-interest. Without an awareness of this, Carter’s vision lacks relevance—which is unfortunate, because he is clearly trying to find it. The end of “Babylon,” the terrorism episode, is an incongruously charming little aphorism for finding hope and peace on earth—a statement of purpose that is sadly undermined by everything that comes before it.

The Truth Is Out There, is the famous tagline for “The X-Files.” But that statement has always been a red herring; the show’s strength, as critics far better versed in the series than myself have demonstrated, is not in the mythological quest that stitches together the plot but in the tiny truths discovered from one week to another. And this event series is an excellent case study for why the truth being out there is such a problem; when the unexplained and the frightening can only be parsed through the language of external mystery or the assault of an other, a lot of internal dysfunction gets a free pass to run amok. (Indeed, one of the original series’ key components was that Mulder was obsessed with the “out there” truth to the point of passionate, romantic obsession; the event series, strangely, diminishes this relationship to a cerebral puzzle-game, characterized by a great deal of shouting.)

The original series had the ability to play delicately with the extremes of inner terror and external suspicion, as it did with so many other dichotomies. Unfortunately, the event series loses the nuance in favor of noise, and has somehow made a beloved, moody series into a strangely accessible manual on how to fear the unknown. I find myself falling back to that other unofficial slogan of “The X-Files,” first heard from Mulder’s lips in the fourth episode and emblazoned on the UFO poster in his office: “I want to believe.” It’s spoken more than once in this event series, but it is not, from what I can tell, truly felt. Mulder used to search for meaning; he used to bring intense faith to every terrible encounter an alleged victim described. “The X-Files” used to care about something more than simple paranoia, and maybe we did, too. But whatever that was—that thing we wanted to believe in, and occasionally really did—it feels, in 2016, more irretrievable than ever.