"I’m just weeping and weeping": Thao Nguyen on how Marilynne Robinson's "Gilead" set the tone for her new album 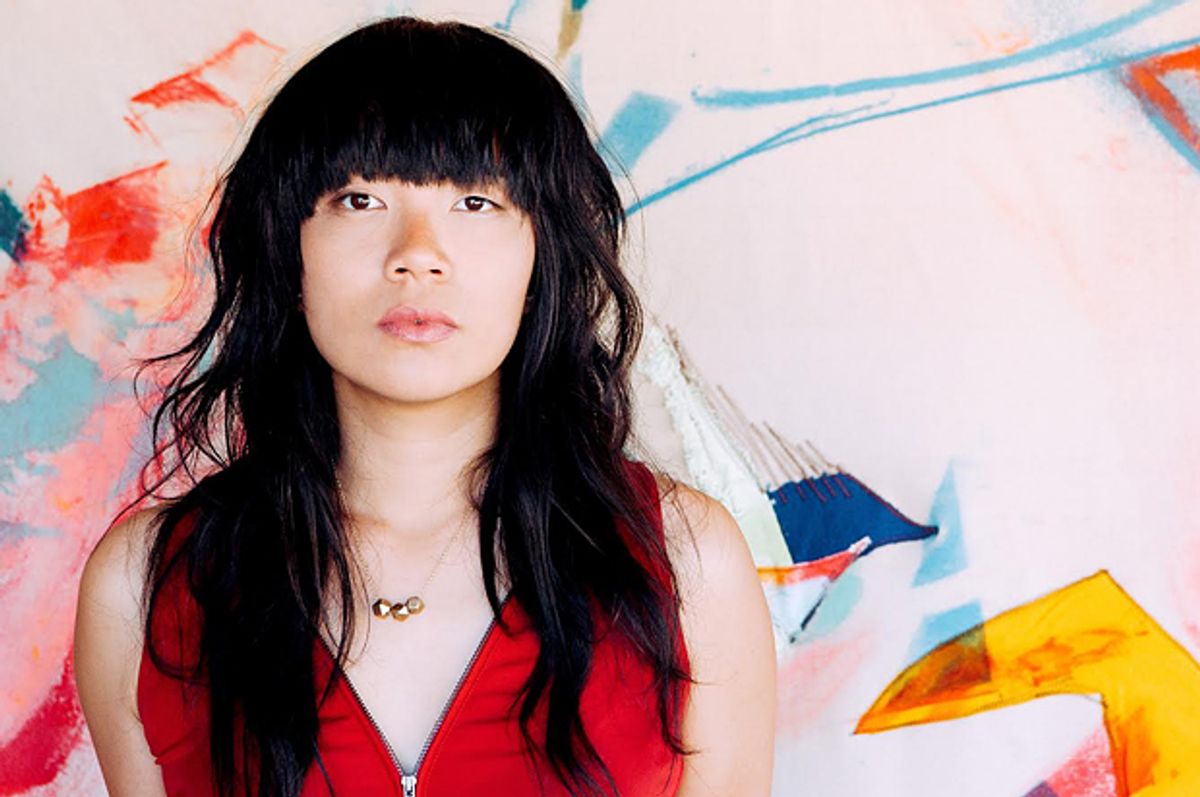 Thao and the Get Down Stay Down are a band that’s always seem to know their trajectory. Early albums contain hook-laden songs of romantic frustration. Their prior album "We the Common" was inspired by Thao Nguyen’s correspondence with female prison inmates. And all of their albums are driven by Nguyen’s expressive lilt. Their new record, "A Man Alive," produced by tUnE-yArDs’ Merrill Garbus, was birthed from beats and bass. The band wanted an album that would be exhilarating to tour.

But there’s more to the record than a deep, frenzied groove. The beats and bass are the sonic spine to an album that’s deeply personal and vulnerable, as Nguyen processes her relationship with her mostly absent father. In “Millionaire,” Nguyen sings “Oh daddy I broke in a million pieces / that makes you a millionaire,” lines that brought Garbus to tears during the recording. Yes, there are tears to be shed from this record — but they’re kind of tears you can cry while dancing.

Salon spoke to Nguyen about the new album, working with Garbus and what she's reading these days.

It seems like early on, you knew you wanted beats and bass. What do those things make you think of, or mean to you? Why did you want them there, aside from sonic reasons?

Touring "We the Common," towards the end of that touring cycle, we started to fall more into our strengths. Not only our interests, but our strengths lies in more beat-driven [music], and that energy is something that I realize is the most fun and rewarding to perform. Even though we tried with "We the Common," the live show wasn’t at that visceral a level, yet. And so we didn’t know what we were trying to capture, yet.

Without paying this much attention and stripping things away, and relying more on beats and bass, and grounding in that and growing from it, content-wise, song content-wise, the emotion of it wasn’t going to be reached without it.

Was this your first time programming drum beats for a record?

Definitely for a record. Yeah, I had messed around a little bit on the record that I had made with Mirah. But that was definitely a more concerted effort this time, to explore and mess around with it. I don’t claim to be proficient with that computer, or that software at all.

How did working with Merrill Garbus come about?

We are very good friends. And we had collaborated and co-produced that record together. The one that I made with Mirah, years ago. We’ve known each other for years, and have toured together, and have always been really great friends. And have wanted to work together more extensively for a long time. But scheduling wise, I didn’t know if it would ever happen. And for this new record, my manager and I started talking about the songs for it, in the really early stages. I had mentioned that I wanted to ask Merrill to produce a song on it, to make beats for one song and work on it from there. And then my manager suggested, why not the entire record? I loved the idea. But I just didn’t think it was logistically possible.

We were able to work it out, and then it became such so fulfilling and rewarding, and productive beyond what I could have hoped for. There’s no way this record could have been made without her. Not just sonically, but content-wise. I don’t think I could have gone there and made anything without really trusting who was at the helm. And without infringement and – first and foremost, as my friend.

There were some very intense moments, and very vulnerable moments where I didn’t even think the song [“Millionaire”] would go on the record. I would write a line, and then I would refuse to sing it.

I wasn’t planning on putting it on the record. But then it became clear that it was, in a lot of ways, the heart of it. And the purest part of it.

Since the last time we talked, you had taken some classes with the writer Lidia Yuknavitch. I wondered if any of those writing classes or writing that you have done since then helped open you up to the writing you did for this record.

Yeah, I think definitely. With "We the Common" and all the other records, whatever I was reading at the time and whatever I was seeking out to read was a major inspiration and motivation. Within songwriting, there’s so much writer’s block that my favorite thing to do is just read about the discipline of other writers. I really love to read about other writers’ routines.

Prose writers, or whatever. And I don’t necessarily do it, but I appreciate that they do it. And I love to hear when they limit their writer’s block, as well. I was writing every day in a journal and free writing. A lot of that writing turned out to be the germ of a song or lyric.

But this record, I wanted to credit Marilynne Robinson’s "Gilead" when I first started writing songs. It’s – oh my God, I wept. And that doesn’t happen often, where I’m reading it and I’m just weeping and weeping. I finished this particular chapter, a passage toward the end of the book. That helped me write “Astonished Man,” which then set the tone for the record. That song sets it, sort of sonically and also content-wise.

One of the things that I really like about this record is that the content is raw and dark and vulnerable. And then the musical style is not. Did you consider how the content and the form would go together?

Yes. Yeah, I think that it was always going to be like that, but it wouldn’t necessarily be a conscious decision. It’s just that I am more attracted to more upbeat songs with hooks.

I really have always appreciated that juxtaposition. And I wanted people to dance to it if they so chose. But if they wanted to spend some time with the lyrics, then maybe it would evoke something else. We also had an eye towards the future of touring this record, and playing shows. When you’re recording the record, you’re also considering how it will be performed live. I knew that if I was going to do it every night, I wanted to also be enjoying myself. It’s a downer enough already, just thinking about it. But then actually having to play back and forth for a while would be exhausting.

While you were writing the album, were there things that you learned or connections that you found that surprised you?

Yeah. I was surprised. What surprised me towards the end of it, and towards the end of the writing process, which the writing process was comprised of two or three different sessions. Wherein I thought we had enough songs for the record, but then we had extra time. So then I was asked to write more songs for the record. There were a few months in between recording sessions.

I think that the earlier batches are more optimistic. For example, in “Astonished Man,” there’s a bend towards acceptance and forgiveness. And I thought that it would be more of a linear path. And I thought that – because emotionally, what was happening was I did feel that I had sort of reached a different place, where I could accept and forgive and all that.

Then it turns out that it actually doesn’t really happen that way. My intentions for the record was to be almost a chronological document. The songs kind of turned on themselves, as far as whatever grief, or whatever anger. It doesn’t necessarily go anywhere because I was experiencing it just in my personal life, as it was happening.

Basically, the surprise was nothing has changed so much yet. I was really hopeful. And you can hear that in some of the songs. I don’t think I should have been surprised. Because a few months of concerted songwriting is not necessarily going to change the course of what’s been happening for most of my life.

One of the songs that really grabbed me was “Nobody Dies.” And I was hoping you could speak about that, as far as any aspect that you want to go with.

“Nobody Dies” was an earlier one. Probably the second song we recorded. And it was very much a full band session. It was a live recording. I know we tracked it all live. And we were working out different vibes and arrangements, and then we fell into this – I have – I had decided on its Breeders-esque tones.

What it ended up being in the studio captured that kind of panic and urgency that was the root of the song. Which also set the tone for a lot of the record. I have friends whose parents are ill, and closer to passing on than staying around. I had a very close friend – I guess I still do – who has a similar relationship, with similar estrangements with her dad. And he was really sick. Anyway, it motivated me to start wondering and worrying. What if something happens and we have not moved beyond this impasse? And that we were still frivolous in our inertia? Too complacent.

One more question for you. I’m curious if you’re still corresponding with inmates, and also how "We the Common" affected the desire of other people to volunteer and work for prison reform, or do letter writing. If you could just kind of catch us up on where all that went.

Yeah. I’m still in correspondence with a bunch of different people in CCWP [California Coalition for Women Prisoners], and in different institutions in California. And Valerie [Bolden, an inmate who inspired a song on "We the Common"] and I had exchanged letters for a while, and we actually heard from a radio producer friend of mine who went in. She’s down in the LA area at CIW [California Institution for Women]. I unfortunately haven’t been able to go see her because I’m up in San Francisco. It’s just been harder to figure out clearance and scheduling and all that. But we were sort of in communication with Drew, my friend who’s a radio producer who is interviewing her and doing an ongoing document of her time inside, and whether or not the song played any role, or what she thought of it.

I’m still going on prison visits when I can, but with the start of this album cycle, I don’t know if I’ll be able to go for a while. I went a couple months ago, and I’m still trying to stay involved in the local CCWP organization as much as I can. Just went to a meeting last week.

And touring the record was awesome. It reinvigorated our energy around touring. And for me, the perspective that it gave me, and the idea that we actually were just sort of sharing time with people. It felt like a more communal space. And there were some people who did come up to me and say that they were getting more involved, and were curious about local organizations in their area that would be involved in prison advocacy, or prison reform.