Joe Scarborough and Mika Brzezinski are just mouthpieces for the right: From Trump softballs to shilling for the Kochs, they are anything but journalists

Cozying up to the Kochs and The Donald, while bad for the country, is a ratings boon for the "Morning Joe" co-hosts 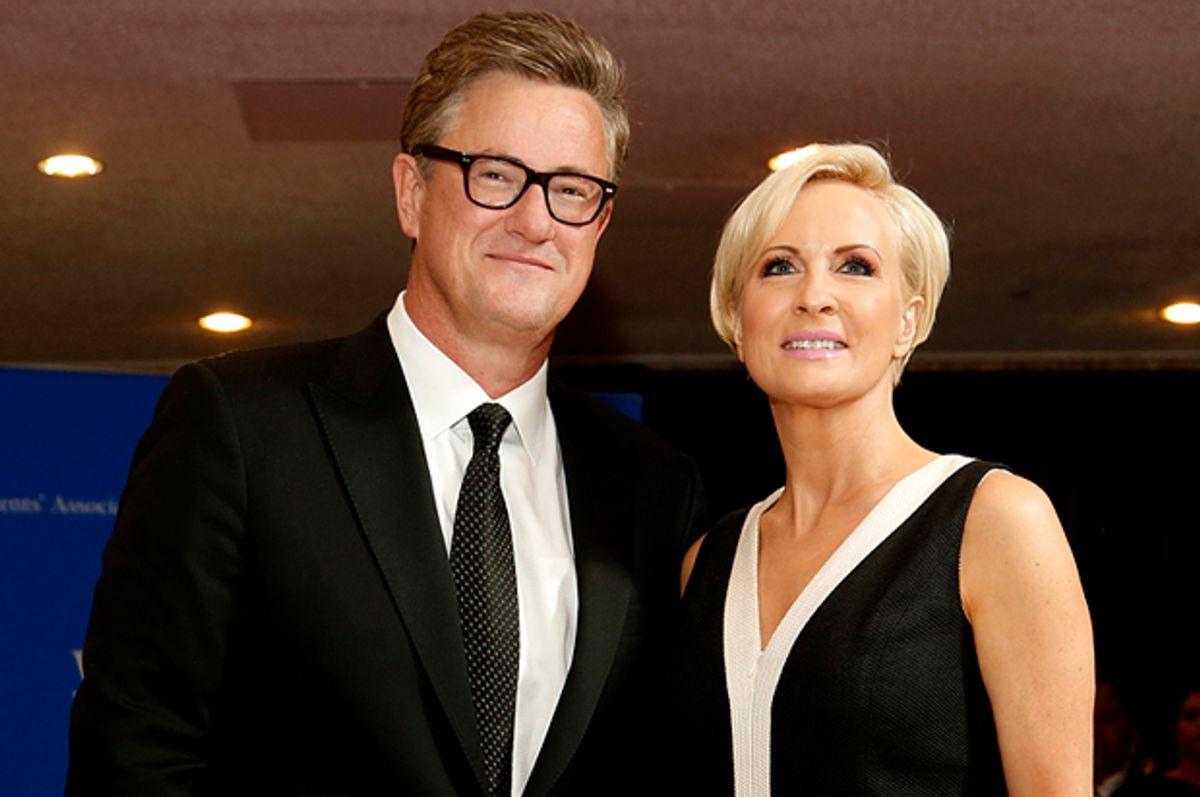 "Morning Joe" hosts Joe Scarborough and Mika Brzezinski are facing scrutiny after (somehow) "Simpsons" voice actor Harry Shearer got ahold of leaked audio — which he then played on his radio program "Le Show" — from a hot mic during a commercial break in MSNBC's town hall with Donald Trump last week.

The audio is fairly innocuous — jokes and pleasantries expected of normal people, regardless of political differences; "working the refs" some have called it — if not coupled with reports that Brzezinski and Scarborough are getting too cozy for comfort with the GOP frontrunner.

It makes a hell of a lot of sense for Trump to familiarize himself with the liberal foil to Fox News (especially considering his prolonged spat with Megyn Kelly and, by extension, her network). A master of media manipulation, Trump knows better than any candidate how to wine-and-dine pundits and speak entirely in soundbites. But for the "Morning Joe" co-hosts to throw objectivity to the wind is particularly weird for a show on a network that's ideologically at odds with nearly everything that's fallen out of Trump's mouth this election cycle.

But Mika and Joe don't appear to answer to MSNBC's partisan leanings. And, according to a CNN Money report, it's becoming "a source of frustration" for some NBC executives who find the co-hosts' Trump idolatry not only off-brand but "over the top" and "unseemly."

Baltimore Sun columnist David Zurawik explained the phenomenon, as it pertains to Scarborough, in a recent piece:

"Many cable show hosts are not journalists, and, sadly, they have never been socialized to the mores and ethics of the profession. But all of them do serve at least a quasi-journalistic function in setting the parameters and tone of the way candidates are depicted in the national conversation."

It can be said that Joe is doing his part to rally whatever Republican voters watch "Morning Joe" against one half of Trump's remaining rivals, Marco Rubio. According to an email obtained by the New York Times, Scarborough saw it as a slight when Rubio "repeatedly appeared on rival cable news shows but kept rebuffing invitations to appear on 'Morning Joe'":

"While Mr. Rubio has boycotted the program, its hosts have derided him for everything from his fashion choices ('shagalicious') to his lack of legislative accomplishments, producing the kind of memorable moments that have taken off on social media."

Yet, despite pushback from their network, the "Morning Joe" duo still can't resist an opportunity to get in bed with The Donald, whether on live TV or on social media.

In response to Donald Trump's short-lived beef last week with Pope Francis -- the latter calling Trump unchristian for his absurd plan to force Mexicans to bankroll a border wall to keep themselves out of the U.S. — Scarborough tweeted the following:

A lot of folks are on Joe's case because, "(T)he walls at the Vatican don't surround it completely, were built centuries ago, and don't really keep people out." Scarborough's real offense, however, is how lazy the tweet was. The Church has so many issues that would have hit closer to home (e.g. money laundering, child sex abuse, antifeminism).

Short of explicitly siding with Trump on the issue, Scarborough effectively downplayed criticism (from the Pope, no less) of Trump's tentpole platform. Meanwhile, a major critique of Joe and Mika's moderating at last week's Trump town hall was their failure to press the candidate on his xenophobic immigration policies.

You almost want to grab Mika and Joe by the shoulders, shake them, and tell them to stop biting the hand that feeds them -- until you realize that that hand is attached to a billion-dollar super PAC.

Last November, "Morning Joe" hosted the first ever joint Koch brothers interview, at their childhood home in Wichita, Kansas after Mika and Joe attended one of the brothers' infamously shady biannual donor summits in Palm Springs the previous winter. Worse yet, the co-hosts have for years defended the Koch brothers' public image. The joint interview -- featuring questions like, "Do you think you got [your graciousness] from your mom?" -- was ultimately an effort to humanize the billionaire brothers who've become synonymous with Citizens United and staunch Libertarianism.

And if you need a more in-depth analysis of how the Koch brothers have carpet bombed the democratic process, I recommend Jane Mayer's New Yorker piece -- and this New York Times story about the creepy espionage bullshit she endured in researching her book, Dark Money: The Hidden History of the Billionaires Behind the Rise of the Radical Right.

Scarborough and Brzezinski's unwavering support for Trump makes more sense in light of their complacency with the undemocratic practices of the Koch brothers. It's understandable that the "Morning Joe" co-hosts -- as network analysts and not objectivity-bound journalists -- value Nielsen ratings over integrity. And Donald Trump will be the first to tell you he's a ratings machine.