If you're hoping that one of these candidates could unseat Trump if only the others dropped out, keep dreaming 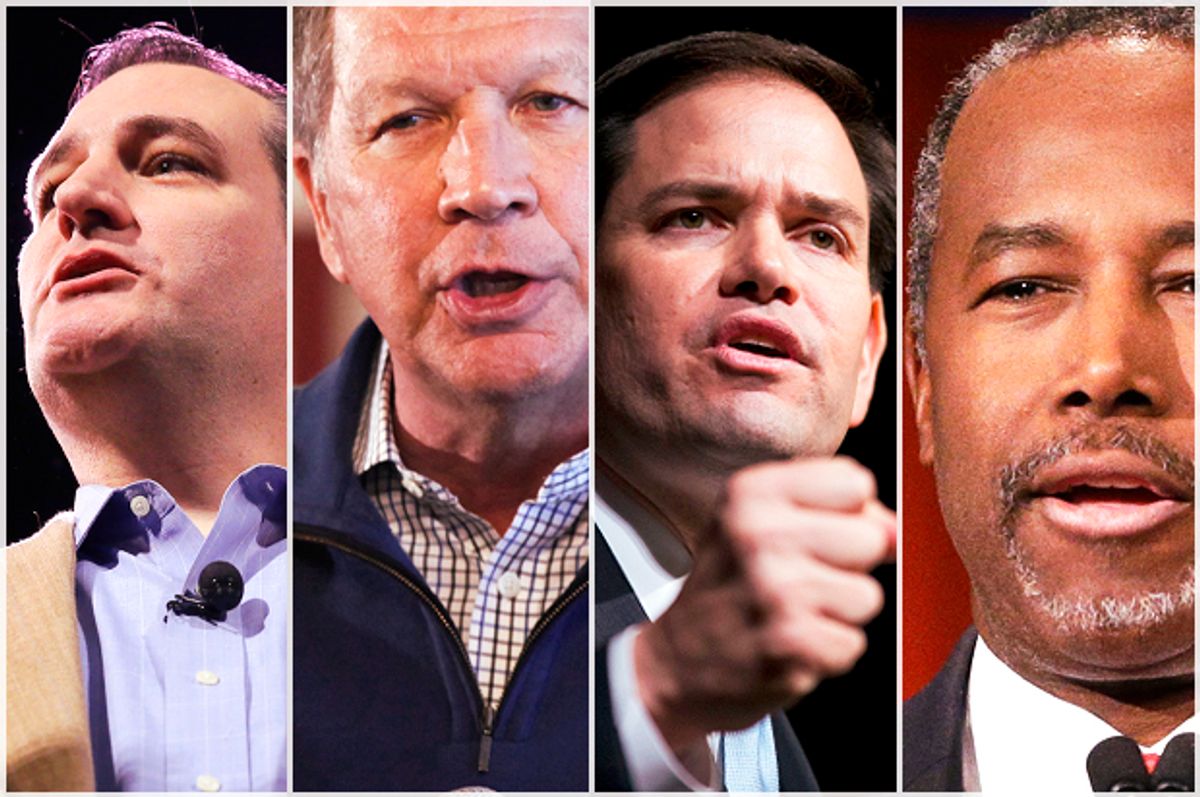 The Republican primary is down to its Final Five.

With the end of Jeb Bush’s campaign, there has been some talk this week about trying to get a couple of the remaining candidates to drop out of the race so their supporters will consolidate behind whomever is left and has the best shot at beating Donald Trump. The problem is that none of these guys will want to drop out, and at least two of them (Ted Cruz and Marco Rubio) seem to each genuinely believe he is the party’s last hope of stopping the Man With The Hamster Hair. What is the source of the candidates’ resistance to falling on their own swords, and what would it take to get them to do so? Here is a look at each one, in order from lowest to highest ranking in the polls.

Since the Carson campaign is basically one money-making grift for a whole bunch of consultants, direct marketers, communications advisers and assorted other sharpies and mountebanks, the whole rickety scaffolding can’t come down until they have vacuumed every last cent out of the retirement accounts of the people on their email lists. All they have to do is keep trotting Carson out there for a few debates and the occasional rally, maybe get him to do an impression of Cornel West questioning President Obama’s genuine “blackness” for some third-rate wingnut radio talk-show host, and then send out fundraising emails touting the liberal media’s opprobrium. After, that: Wham! More money flows out of the heartland, directly into Eleventy Marketing Group’s corporate account.

How long can this continue? Well, not all of Carson’s donors have yet pulled every bit of equity out of their houses, so how long ya got? Despite the lingering effects of the Great Recession, there is still a lot of money out there in the accounts of a lot of suckers. It could continue until 2020 if Carson really wanted to.

What would it take to get him out of the race? Well, first someone has to wake him up and tell him it’s time to go. But this should be easy. The RNC can promise him a speaking slot at the convention this summer – it doesn’t have to be in prime time – and buy enough copies of his latest book to give to every attendee in Cleveland as a souvenir. Then they'd have to hope that his evangelical supporters don’t go to Trump, who is doing better than expected with that demographic.

At this point you have to wonder if John Kasich is still in this race solely for the free snacks in the green room at every debate. What other reason could there be? He’s recently proven just how much of an extremist he is on abortion, but he’s no more extreme than any of the other candidates. Aside from that, he could pretty much be playing Generic Moderate Republican No. 1 on the new season of “House of Cards.” He opposes gay marriage but won’t condemn it as the province of hell-bound sodomites. He admits climate change is an actual thing that is happening, but he won’t recommend any ideas for fighting it. He took the Obamacare expansion of Medicaid for Ohio, something that has hurt him with the base even if it hasn’t been mentioned much in the primary.

Basically, Kasich is a guy Frank Underwood could bully into supporting an invasion of China in exchange for naming a post office in Akron after Urban Meyer.

With the Republican convention in Cleveland this year, it must kill Kasich to know he’s not going to take the stage as the party’s nominee. In his heart, he’ll want badly to hang on at least until Ohio primary on March 15. If I’m the RNC, I point out the potential embarrassment of losing to Donald Trump in his own state. Then I offer him a prime-time speaking slot and a paid trip around the country to teach delegates how to speak Midwestern so they can exclaim properly on the convention floor this summer. (“Aw geez, gosh! The great state of Oregon pledges all its delegates to Donald Trump, for Pete’s sake!”)

Marco Rubio will never suspend his campaign, because that generally involves having to show up to your own press conference. The RNC and his wealthy benefactors can promise Rubio fabulously lucrative sinecures doing a minimal amount of anything for the rest of his life, but they would still have to get through his utter disbelief that all the other candidates aren’t bowing to the inevitable and dropping out instead. Have you ever seen a panicky ten-year-old find out his parents couldn’t book the party room at the bowling alley and he’ll have to have his birthday party in his garage instead? That is Rubio hearing advice to suspend his campaign.

The RNC will have only itself to blame for the difficulty of that conversation. Every Republican establishment type and the RNC's media enablers have been pumping Rubio as the best candidate to get past both Trump and Ted Cruz for no good reason other than he’s vaguely telegenic and doesn’t sound like a complete lunatic when he’s talking.

Maybe Mitch McConnell can promise Rubio that he gets to be in charge of choosing the menu in the Senate cafeteria until his term is up at the end of the year. Failing that, the majority leader could tell the younger man to just take the rest of the year off. What the heck, it’s not like the Senate will be doing much of anything anyway.

When you have been ordained by God Himself to become president, when your wife is having visions of it and your lunatic father is citing biblical scripture to prove the case, why would you listen to the pleadings of mere mortals and end your campaign? Besides, it’s not as if the GOP can offer Cruz anything. They might give him a speaking slot at the convention but it will be a terrible one, certainly not in prime time. The entire party hates him. His colleagues in the Senate hate him. Even his hardcore supporters are starting to wonder if he’s some sort of RINO squish. By the time the convention rolls around, he’ll have some delegates who will be treated like lepers. I actually think if he is the nominee, the party might move the convention to another city and not tell him, so he can show up at the Quicken Loans Arena and find nothing but empty chairs and Kevin Love forlornly practicing his low-post moves.

But if Cruz does drop out, most of his support likely goes to Trump anyway. Is there anything the RNC can do to end his campaign and convince his supporters to get behind Rubio? Well, there’s always prayer, and the hope that God will decide he’s let this entire farce go on long enough.