After months of skirting the issue, Donald Trump's main rivals finally hit him head on. Too little, too late? 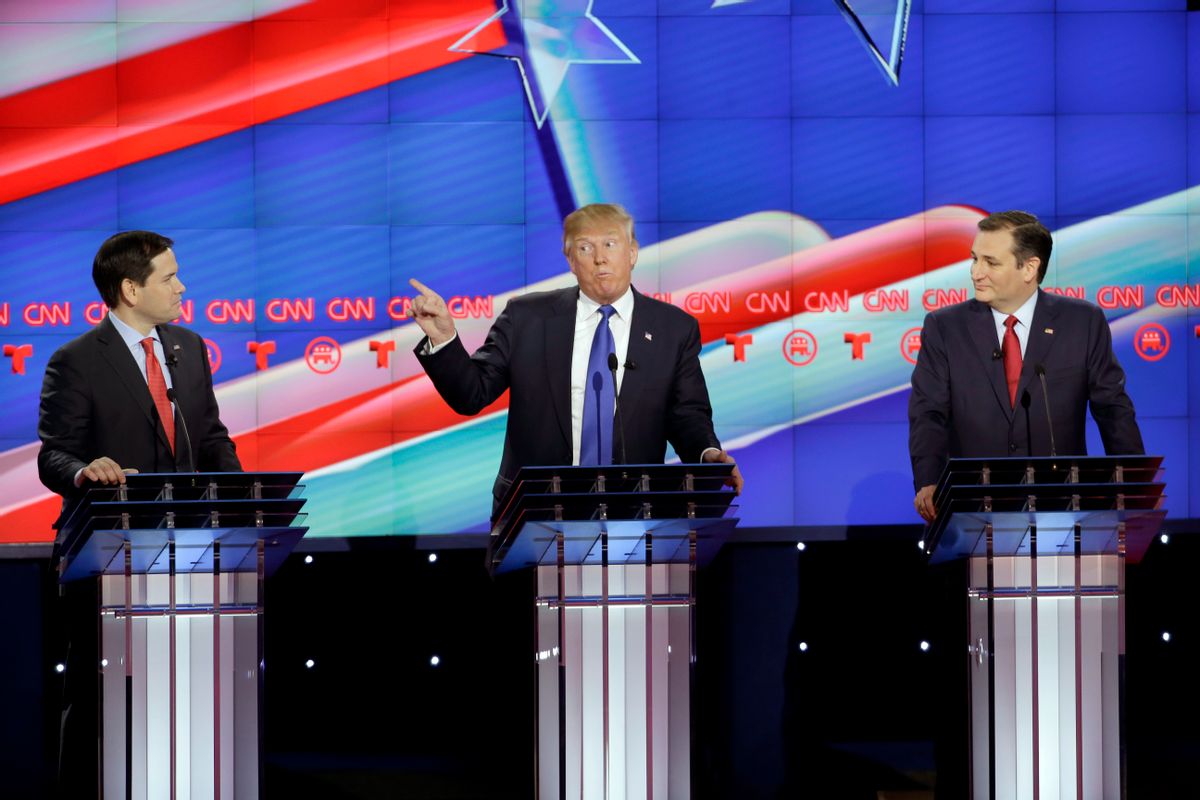 If you didn't get too distracted by the strange screeching noises coming from the audience, you would have been able to hear the roars of approval from the pundits and many Republicans about Marco Rubio's performance inThursday's GOP presidential debate. Finally, Rubio was going on the attack against Donald Trump! He was mocking him! He was bringing up his shady business deals! Trump was looking rattled! It was a disaster! Even Ted Cruz-backer Glenn Beck was gushing.

Here's the one problem with all of that: We've seen this movie before. Trump has been at the center of the Republican race from the moment he entered it, and there have been roughly a million moments where people confidently asserted that he had just done considerable damage to his campaign. Those people have been wrong every single time so far.

Now, could this time be different? Could Rubio and Ted Cruz's extremely belated decision that maybe they should try actually taking Trump to task do what seemingly nothing until now has been able to do and wound him seriously? Perhaps. But there's no reason to pretend like anybody has a handle on how Republican voters are going to react to what they saw on Thursday. Trump did indeed come off poorly. Rubio and Cruz both managed to land effective blows. Will it matter? Nobody knows. It has been proven over and over again that Trump's base doesn't care if he strays from conservative orthodoxy or even if he's been personally sleazy. Maybe the 59th attempt will do the trick. The again, maybe it won't.

Trump was helped in the second half by moderator Wolf Blitzer's woefully poor efforts to keep the debate from spinning out of control. Blitzer's attempts at reigning in the candidates were half-hearted at best; one exchange between Rubio, Cruz and Trump descended into completely deranged yelling.

Blitzer's co-moderators didn't always distinguish themselves either. Particularly lamentable was a lengthy series of questions from radio host Hugh Hewitt about "religious liberty." Despite the fact that the 2016 Republican race has featured some of the most rancid anti-Muslim bigotry in American history, Hewitt's questions centered entirely on the supposed threats to Christians who don't support birth control or same-sex marriage.

The mind-boggling extremism of the GOP was also fully on display throughout. Rubio and Cruz both lambasted Trump for having the temerity to say he'd strive to be a somewhat neutral arbiter between Israel and Palestine, rather than mindlessly backing Israel at every turn. They also decried his oft-repeated line that he didn't want to see people "dying in the streets" if they didn't have health care, thus proving that they both think that having a pro-death position will get you farther with conservatives.

Whether any of this makes a difference in the campaign will become clear by Super Tuesday next week. By the end of the night, the central dynamic of the race—that there are lots of anti-Trump candidates splitting the vote against him—remained stubbornly in place. To assume that Trump will suddenly plunge by 15 or 20 points in the polls between now and Super Tuesday thanks to one debate seems wishful thinking, but anything is possible.