"The Revenant" is Trump, "Spotlight" is Bernie: What this best picture race tells us about our divided America 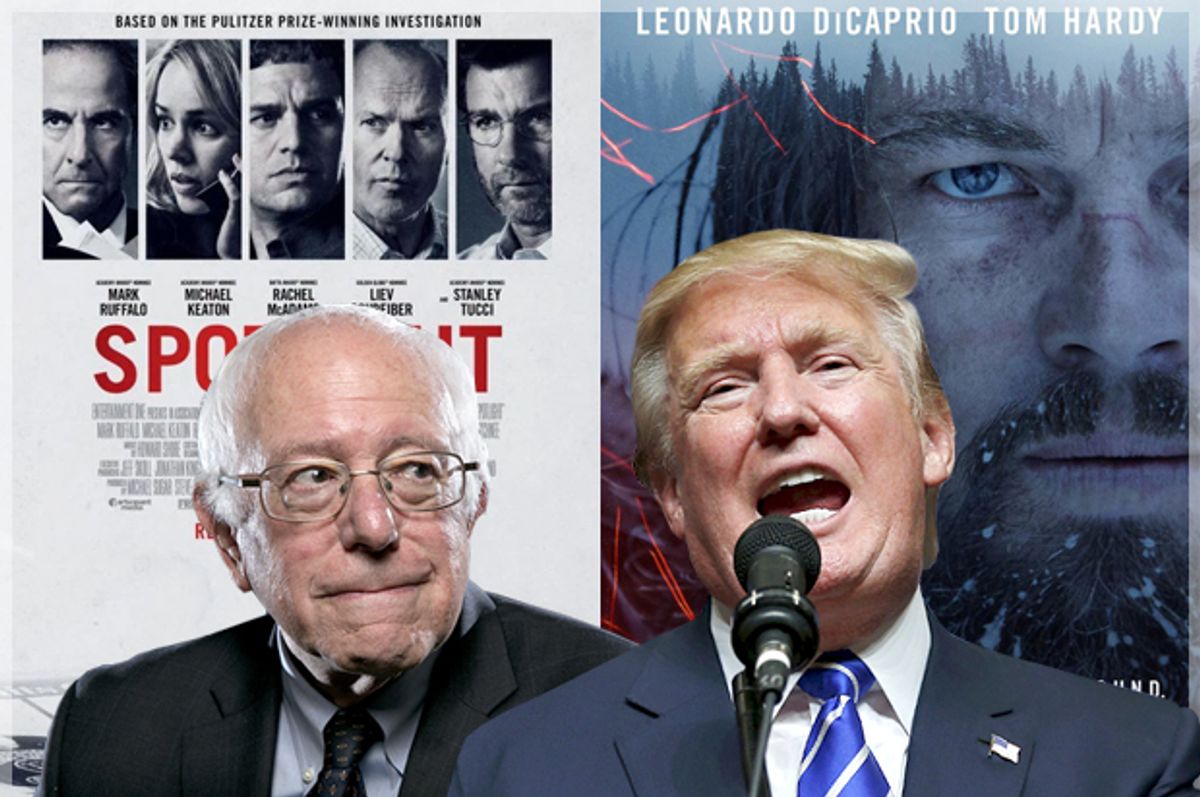 During the current round of Academy Awards ramp-up hoopla and hullabaloo, we’ve been hearing a great deal about how the 2016 contest is blatantly dominated by white nominees at the expense of worthy but unrecognized film actors and directors of color. And then followed a swirl of social media buzz about which Hollywood stars will boycott the Sunday, Feb. 28, televised ceremony in protest. (Apparently not the iconoclastic comic Chris Rock: He is ironically cast in the role of emcee for an already tarnished affair.)

This theme is the dominant takeaway from the long, long red carpet lead-up to the Oscars, and understandably so. But it isn’t the only story. There is also at least one other intriguing theme buried in all the pomp and celluloid, an intriguing dichotomy that reflects a battle within the national psyche.

It’s a story that pits the reflexive, enduring power of the American Ur-myth of rugged male individualism, as played out in Alejandro González Iñárritu’s violent wilderness saga “The Revenant,” against a quieter, more cerebral yet forceful vision of collaboration, revelation and social reform embodied in “Spotlight,” directed and co-written by Tom McCarthy.

The two releases have won shelf-loads of lead-up prizes in the long marathon from Golden Globes to SAG Awards to BAFTAs et al. They are now running neck and neck, according to Vegas odds, in the race for the most glittering haul of them all, this season’s best picture Oscar.

The contrasts between the two are a Janus portrait of the current movie biz, and by extension a culture whose values swing between opposing poles of populism. One movie was a pricey blowout produced by major Hollywood players that cost $130 million to make; the other, backed mainly by politically progressive indie producers, came in at just $20 million. One is about solo, macho endurance and vengeance in harsh company and terrain. The other is about a team effort to expose and eradicate a grievous, insidious social wrong.

If you look at this Oscar race as a metaphor for an internal conflict between collective action and individual achievement in the American zeitgeist, it pits a brand of solo bravado that extends to the buccaneers and demagogues dominating the political news cycle and Wall Street, against a collective, muckraking and (yes) socialist spirit that sounds a lot more like the rallying cries of Democratic presidential hopefuls Bernie Sanders and Hillary Clinton, than Republican rivals Donald Trump and Ted Cruz.

Popular American movie dramas are usually about villains, heroes and victorious heroics, about good guys (and to a much lesser degree, gals) vanquishing forces of evil. “Spotlight” and “Revenant” are not exceptions. “Spotlight” depicts a righteous newspaper crusade against a corrupted religious hierarchy of enormous power and influence. “Revenant” centers on one man’s gritty Darwinian struggle for survival and fortune.

It is probably in our DNA to hunger for such tales of courage and triumph. Ergo, the basic, heroic journey and movie pitch, from the 2100 BC “Epic of Gilgamesh” to the scenarios of all movies up for best picture Oscars: A character embarks on a daunting quest, a journey (metaphorical and/or physical) that’s challenging almost beyond endurance, whether it unfolds on city streets, in aerospace or in fantastical alternate realities.

The quest is tension-filled and perilous, riddled with trial and tribulation. Then just before the hero’s breaking point, when all hope seems lost, there is completion and meaningful victory. Fade out. Cue the cheers, uplift and awards.

But these days, what heroic figure is most worthy of our highest veneration? The solitary dragon slayer winning by any means necessary?  Or a squadron of urban truth tellers, fighting institutional venality?

Let’s start with the not-so-subliminal message and visceral thrills delivered by “The Revenant” and its fellow popular, expertly crafted 2016 Oscar contenders as the male-driven but less violent Oscar nominees “The Martian” and Steven Spielberg’s “The Bridge of Spies,” as well as the celebrated kill-fest “Mad Max: Thunder Road.” (It has the highest kill count, about 114 slain, but, at least Max is matched with a bad-ass female avenger.)

In “The Revenant,” there is primal urgency in the plight of fur trapper Hugh Glass (played by Leo DiCaprio) as he braves the rigors of a hostile, uncharted no man’s land, and the ferocious attack of a big bad bear en route. Hugo’s a lone ranger, in search of fortune and vengeance. He may get some reluctant assistance from a fellow mountain man whose dead body makes a dandy decoy, a friendly Native American who helps him heal, and a horse whose carcass provides a warm place to nap. But bearded, ragged, half-frozen and soul-battered, DiCaprio alone endures the worst thrown at him -- even though the legendary deeds of the real 19th century adventurer he plays have never been fully authenticated.

It is obvious why so many people flock to such red-blooded fantasies, particularly the 12-to-24 year old movie fans who Hollywood has increasingly wooed and catered to. These attractions keep the pulse pounding and the eyes popping. Strenuous action precludes boredom, and there’s little moral ambiguity to worry about. There’s no doubt the (white, male) hero will vanquish his adversaries – human, animal and environmental – and be cheered on for it.

Even the filming of “The Revenant” feeds into the archetypal myth of infallible male fortitude. Press coverage has emphasized how the cast and crew braved harsh physical conditions (i.e., shooting in 20-below weather), and did it ­– horrors! – out of cellphone range. (Communiques had to be delivered by snowmobiles.) Of course, they were being handsomely paid for fabricating the fable.

By contrast, a feature like “Spotlight” can seem too slow, too prim, too “real” for the masses who view movies as more elaborate versions of computer games.

“Spotlight” offers a refreshing, bracing alternative to the reductive Darwinian bombast of contemporary action flicks (and political rhetoric), while still delivering riveting suspense and urgency. And the quest in the movie is a challenging collective action for the common good, not for revenge or individual gain.

McCarthy brings us a detailed, unstuffy account, based on true events, of how a crew of diligent (male and female) investigative reporters at the Boston Globe gradually unraveled one of the most egregious scandals and ultimately far-reaching institutional coverups of our time: the routine sexual abuse of children committed by many American parish priests, and the failure of the Catholic Church to acknowledge, punish and end it.

Refreshingly, “Spotlight” is not a battle between armed adversaries, but a war of lies and truth between two competing social forces: a self-protective religious hierarchy and a weakened but still vigorous Fourth Estate. And without a drop of blood shed or any explosives detonated or CGI effects employed, it is a fight to the finish as tough as DiCaprio’s mano a mano with a (special-effects-enhanced) grizzly.

There’s little eye candy: the actors perform mainly on the set of a cramped, indecorous newsroom, a locale Slate's Dana Stevens described as “a fluorescent-lit hovel.”

Moreover, there is no single, dominant star in “Spotlight,” but a cadre of colorful, driven characters played by a well-blended acting ensemble that includes Michael Keaton, John Slattery, Liev Schreiber, Rachel McAdams and Mark Ruffalo – all stars, but none of them in the lead. It’s telling that the Golden Globes, voted on by foreign members of the Hollywood press, bestowed a “best ensemble acting” award on “Spotlight,” while the Academy Awards honor only individual performances. And unless global warming freezes hell over in the next few days, DiCaprio will soon add a best actor Oscar to his SAG, BAFTA, Golden Globe and other “Revenant” prizes.

So I’ll be rooting for “Spotlight” as the usually underwhelming Oscar ceremony plods along. My own reaction to the film was relief, pride and gratitude. As the reporters endeavor to verify and gauge abusive acts that scarred the lives of hundreds, perhaps thousands of children, they piece together the truth by digging into files, combing court documents and pressing through interviews with reluctant and forthcoming abuse survivors, lawyers -- and finally an errant priest, whose sense of entitlement overcomes any sense of guilt or responsibility for his deeds.

As they continue on – brainstorming, begging for more time, surmounting their own personal and religious misgivings — these characters conduct the unglamorous, necessary teamwork of journalism in the trenches. It’s the kind I closely observed my colleagues undertake with unwavering commitment during my 25-year stint at the Seattle Times, toil that led to greater public awareness, and corporate and government reforms, as well as Pulitzer Prizes.

So yes, I have some bias here. As our remaining newspapers struggle to survive in the increasingly vapid and slapdash media-verse, Hollywood’s attention to this kind of dramatic public service is long overdue. Indeed, the movies haven’t done it this well since “All the President’s Men,” which won a best-pic Oscar nod in 1977 (but lost to that crowd-pleasing underdog solo-saga, “Rocky”).

But it is more than a desire to call attention to beleaguered journalism at its best that makes me hope for a “Spotlight” win. A win would mean a spotlit divergence, however brief, from all that rough-hewn individualism too often associated with gloating American exceptionalism, to a recognition of the power for good of more humble cooperative, interdependent heroism. Will “yes we can” knock out “yes I did” on Oscar night? And, looking forward, on election night? I’m skeptical, but my fingers are crossed.

Misha Berson was the theater and arts critic for The Seattle Times (1991-2016), and is the author of several books, including “Something’s Coming, Something Good: West Side Story and the American Imagination” (Applause Books/Hal Leonard Inc.).