Final debate before Super Tuesday was the most Trump-centric one yet. Nowadays, though, this show isn't so funny 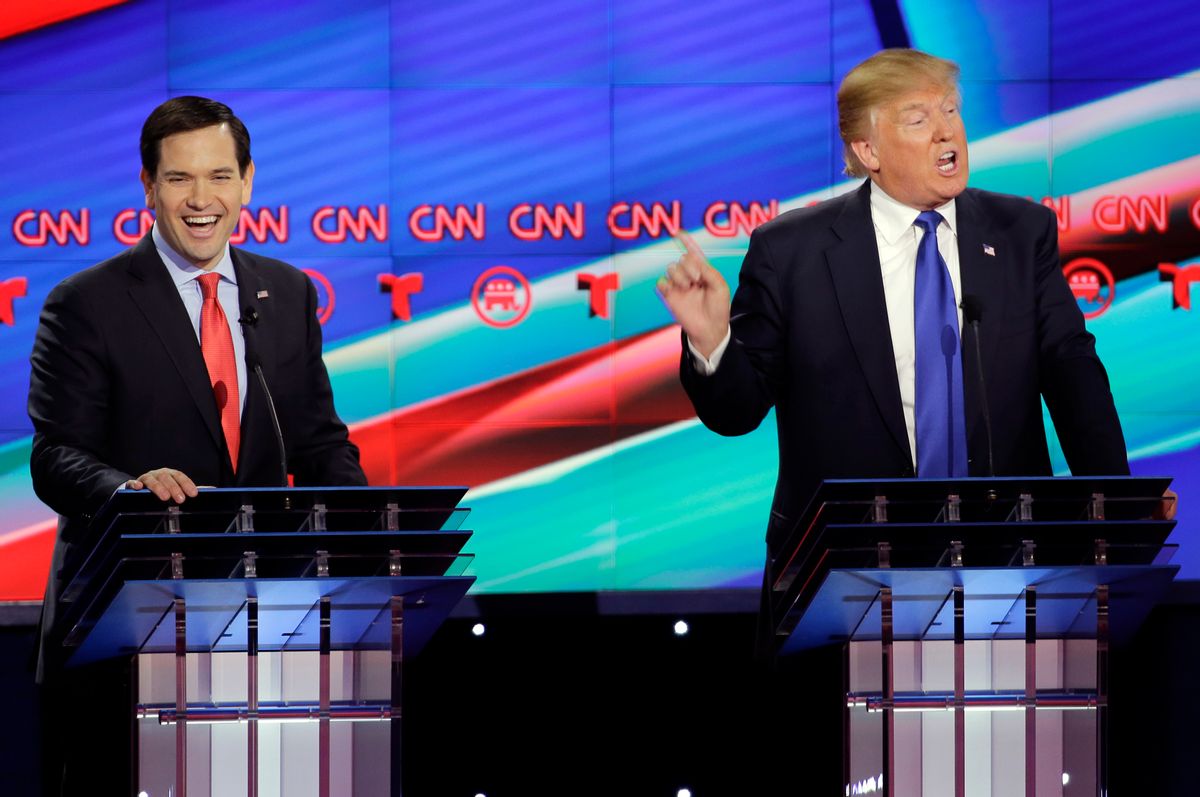 The 2016 Republican Party presidential primary has been a garish combination of flamboyant camp and self-conscious theater. It’s been loud and silly and rollicking. It’s also been completely unpredictable (at least to those 7.125 billion of us who are not currently Roger Stone) and weird. Very, very weird.

But after Thursday night’s debate — and after the days of mass foreboding that preceded it, when American media finally realized that, yes, “Donald Trump, Republican nominee” really was actually happening — I’m now hoping that everyone finally gets it.

The true nature of Trump’s appeal is not funny, and his utterly ridiculous presidential campaign is not a joke.

Here’s an essential part of why so many Republicans — “poorly educated” ones, “blue collar” ones, famous ones, and every kind in between — love Donald Trump. It was his only theme last night. It’s what National Journal’s John B. Judis described as Trump’s “populist” draw to “MARS” voters (“Middle Amer­ic­an Rad­ic­als”). It’s pretty straightforward.

The middle class is “under siege,” as Judis puts it (Trump tends to prefer more visceral language). It’s being assaulted from “above,” by “bloodsuckers,” “cuckservatives,” and a sinister national government; and from “below,” by “illegals,” “moochers,”, Jews, and “the blacks.”

It’s not a pretty picture. It’s something a lot more corrosive — and a lot more dangerous — than mere “anger,” which seems to be the mainstream’s favored explanation. As Judis notes, it screws up our usual framework for understanding American politics, because Trump’s ideology is “neither con­ven­tion­ally lib­er­al nor con­ven­tion­ally con­ser­vat­ive.”

What it lacks in conventionality, however, it more than makes up for in spite.

Sometimes the viciousness is more noticeable than others. Parrying an early attack on his hiring practices from Sen. Marco Rubio — one which the senator neglected to credit to a recent article in the New York Times — Trump noted that he’d recently been endorsed by Joe Arpaio, the sheriff of Maricopa County, Arizona. That might sound like just another example of the “all politics is local truism. But those familiar with Arpaio know it isn’t.

If there exists an inheritor of Bull Connor’s legacy in America today, Arpaio is it. Here, for example, is how Rolling Stone described the sheriff and his unique brand of authoritarianism and nativist hostility:

The sheriff made a splash by setting up roadblocks to detain any drivers who looked like they could be in the U.S. illegally – a virtual license to racially profile Hispanics. Reports of pull-overs justified by little or no discernible traffic violations were soon widespread: Latinos in the northeastern part of the county, one study shows, were nine times more likely to be pulled over for the same infractions as other drivers. Arpaio's men, the Justice Department alleges, relied on factors "such as whether passengers look 'disheveled' or do not speak English." Some stops were justified after the fact: A group of Latinos who were photographed sitting in a car, neatly dressed, were described in the police report as appearing "dirty," the ostensible rationale for the pull-over. Testifying on the stand on July 24th in a federal trial over his department's blatant record of racial profiling, Arpaio himself acknowledged that he once called the crackdown a "pure program to go after the illegals and not the crime first.”

In 2006, he formed an anti-corruption unit led by his chief deputy, David Hendershott, a large, intimidating man whose own co-workers used Darth Vader's theme song as a ringtone to herald his incoming calls. The unit, which worked hand-in-glove with county prosecutor Andrew Thomas, was tasked with rooting out political corruption, but quickly evolved into a de facto hit squad aimed at Arpaio's enemies. Hendershott conducted investigations and filed complaints against the county manager, four county judges and Maricopa's entire board of supervisors, all of whom had crossed Arpaio in one way or another. In one instance, the sheriff's office arrested a county board member who had questioned the costs associated with Arpaio's immigration crackdown, holding him in jail for several hours without ever filing a charge.

If you’d never heard of Arpaio before, you could be forgiven for forgetting the exchanged even happened. But for everyone who knows Arpaio — and especially for dedicated xenophobes and Latino-Americans — it was as close to a bullhorn as a dog whistle gets.

At other moments, Trump’s overriding theory of politics — that the sole criterion for leadership is the ability to dominate in the midst of ruthless competition — was impossible to escape. To some degree, this was because his fellow candidates share his conviction. At the very least, they were willing to pretend they did.

And to some degree, it was thanks to how Trump responded to Sen. Rubio and Sen. Cruz’s incessant attacks. It was his usual bully schtick, through and through. Cruz was a liar, a phony, the most unpopular kid in the senate cafeteria. Rubio, meanwhile, had a “meltdown” in New Hampshire, he was an all-talk politician, he’d never made a significant business decision in his life. (All of this, of course, is absolutely true.)

But in perhaps the weirdest twist of the night, the Republican Party’s elevation of unfeeling into a political virtue was never more obvious than when it was Trump playing the role of bleeding heart. More than once, Cruz and Rubio teamed up to bash the Donald as insufficiently devoted to repealing the Affordable Care Act. Trump’s heresy? He wanted to ensure that no poor, sick American was “dying in the street.”

Opposing a needless, sociopathic indifference to the suffering of the most vulnerable among us; this is the Republican Party in 2016. Maybe Trump isn't the one we should worry about after all.