One bully endorses another bigger bully: Why Chris Christie hitched his wagon to Donald Trump

It wasn't that long ago that Christie was railing against Trump for being unpresidential. So what gives? 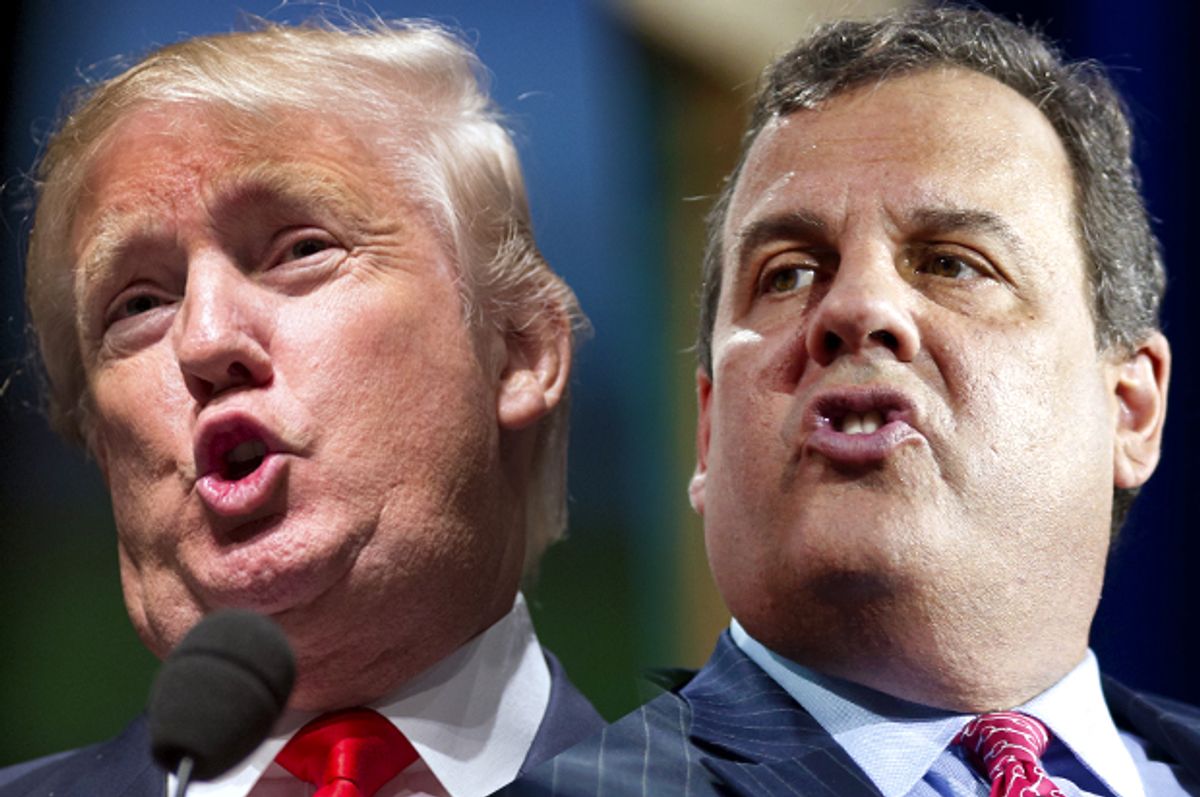 There are two reasons why Chris Christie endorsed Donald Trump on Friday, neither of which reflects well on him. But the likability ship on Chris Christie did not just sail long ago, it pointed itself out into the open ocean and set the throttles to “full ahead.”

Reason number one: Christie loathes Rubio for reasons that are unclear. Maybe it’s the latter’s “golden boy” status with the Republican establishment, despite his meager résumé. Maybe Christie sees him as an eager youth trying to climb the ladder past the more deserving and longer-tenured members of the Republican Party. Maybe he’s jealous of anyone who doesn’t have a face like a well-used frying pan. Who knows?

Whatever the reasons, the dislike was palpable for some time before Christie dropped out of the GOP primary. It culminated in that infamous New Hampshire debate on the Saturday before that state's primary, when the New Jersey governor bullied Rubio into repeating himself multiple times as if his text-to-speech program had badly malfunctioned. The attack hurt Rubio, who then finished fifth in the voting, but it did not help Christie boost his own standing with voters. He returned to New Jersey the day after the primary and suspended his campaign almost immediately.

So it was that, offered the chance to bully and trash-talk Rubio one last time, Christie couldn’t resist. All he had to do was show up at a rally in Dallas and let Donald Trump glad-hand him like they were Will Graham and Freddie Lounds hamming it up for the Tooth Fairy. And when has Christie ever turned down a free trip to Dallas?

Then there is reason number two, which is that Chris Christie is a rank opportunist who would sell his own children to a traveling gypsy carnival for the chance to remain in the spotlight or win a cabinet position in President Trump’s administration. He’s termed out of the New Jersey governor’s mansion in two years and he’s going to need something to do. (Don’t be fooled by his claim that his post-governorship plans include making tons of money. Christie is already wealthy. He craves power and access above all else.)

On the surface, this endorsement looks cynical as all get-out, considering some of Christie’s past statements on Trump. He has repeatedly deemed the real-estate mogul not “suited” for the presidency due to, among others, his positions on illegal immigration and his desire to bar Muslims from entering the country. The rhetoric flowing back and forth had been toxic for months before the primary in New Hampshire.

But Christie has also claimed to be friends with Trump, insofar as politicians at his level have friends. The two men met a decade ago and have spent time together with their wives. It’s unsurprising that two loudmouthed bullies would become friends, but you could see the chemistry in their Mutt-and-Jeff routine at Friday’s press conference when they teamed up to hurl insults at Marco Rubio.

In terms of votes, this does absolutely nothing, despite the fact that the GOP base holds Christie almost as responsible for Obama’s win in 2012 as they do Mitt Romney. (The irony of Christie getting on the apparently winning anti-Establishment team the day after Romney chose the losing Establishment side was not lost on anyone watching this shit-show.) It’s hard to imagine the Trump supporter who sees him embracing Christie and switches his support to any of the Murderer’s Row of dimwits still in the race. There might be a handful of Christie supporters who will decide they are okay with Trump now, but considering how low Christie's poll numbers were when he dropped out of the race, it won’t result in a significant uptick for Trump. Not that he needs it anyway.

Trump also doesn’t need any help bullying people, but maybe Christie will help him out with Rubio anyway. The Florida senator seems to have discovered his inner insult comic at Thursday night’s debate. Either that or he has hired unemployed comedy writers who don’t have the chops to write a Jimmy Kimmel monologue to craft zingers for his campaign. He spent all of Friday throwing out one-liners about Trump’s defunct line of vodka, or suggesting his opponent had peed his pants during the debate. Trump, meanwhile, might have hired Gallagher to help him transition from insult to prop comic. Look for him to start toting a watermelon and an oversized mallet on stage at all his rallies.

That was perhaps the most depressing realization to come out of Friday’s events. As we grind into Super Tuesday, it’s apparent that the GOP nomination will be won by the person and his surrogates who are most adept at aping Triumph the Insult Comic Dog. On the bright side, if this insane spectacle turns into the end of our republic, at least we’ll go out laughing.