The big millennial p.c. lie: Why conservatives and the media keep pushing the myth of campus intolerance 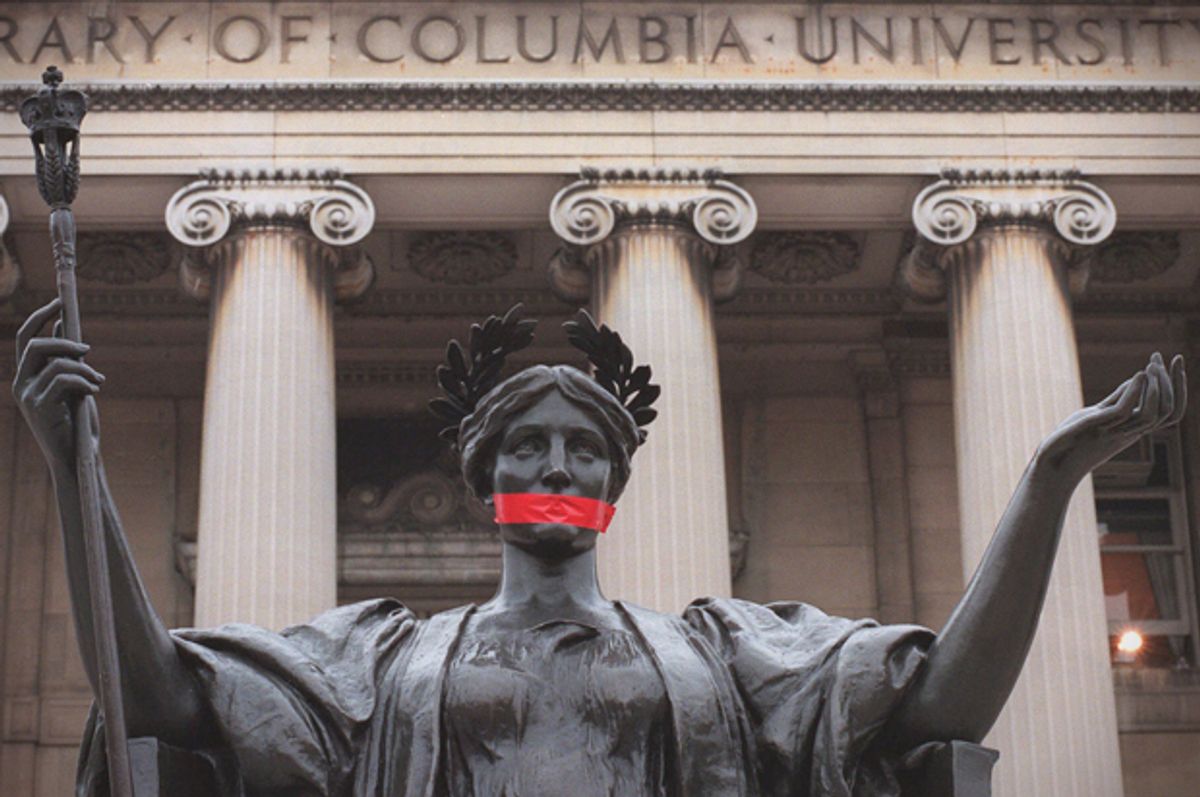 Goldman Sachs doesn’t host Marxist reading groups, and Uber doesn’t provide drivers with labor history tutorials.  With few exceptions, companies don’t actively support the intellectual diversity of the workforce. For this reason, among others, I advise my students to take that math class before they graduate, even though they’re not a “math person”; to take that literature class even though they were “always bad at writing”; and to start forming a habit of reading smart and thoughtful things from opposing points of view.

The end of college shouldn’t be the end of one’s life of the mind, but the reality is that increased productivity in the U.S. economy has not translated into increased leisure time. The last thing many of us want to do at the end of a long day of work is pick up an annotated copy of "Tristram Shandy" and get lost in the footnotes, or settle into a debate with an ideological adversary about the decline of free speech in academe.

I note this because it’s now fashionable to think of colleges and universities as particularly stunted environments, as if there exists another social institution on so large a scale that’s more likely to bring a plurality of viewpoints into dialogue while accommodating inevitable miscues throughout the learning process. Colleges still have conservative clubs (if not, start one on your campus in 11 easy steps), College Democrats, democratic socialists, college libertarians, and in some cases “white student unions.” How many political advocacy groups are active in your office? Virtually no one else in the world has more time and institutional support to explore a diversity of ideas than the college student.

For this reason, without question, colleges should be held to higher intellectual development standards than workplaces. What we’re witnessing lately, however, is not good-faith interest in students’ intellectual development so much as confirmation bias in favor of a cliché. There’s now a desire to see in every ripple of student protest or ideological confrontation on campus a signal that “liberal intolerance” or social justice progressivism is killing free speech.

A representative example of this desire to wring hands over the progressive college environment is Catherine Rampell’s recent Washington Post opinion piece, “Liberal Intolerance Is on the Rise on America’s College Campuses.” Rampell boasts “hard data” to demonstrate the titular claim, so let’s take a look at this “hard data.”

While this “hard data” would seem to confirm that “liberal intolerance” is an enemy of free speech on campus, that claim is questionable. For one—as Rampell notes as an afterthought—the UCLA survey data are for college-bound students who haven’t yet set foot on campus. Thus, the progressive disposition of these soon-to-be college students is by definition not a function of the “liberal” college environment. In fact, if we look comparatively at Pew Research Center data on millennials, which splits respondents into those with a college degree, those with some college education and those who never attended college, respondents with a college degree are the least likely to support “censoring offensive statements about minorities.” Those with a college degree are also the most likely to support the idea that “people should be able to say [offensive] things publicly.”

To be clear, then, millennial respondents do tend to be more comfortable than prior generations with certain kinds of speech prohibitions; but millennials with college exposure are actually more tolerant of offensive speech. To go further, for those readers who have a generational ax to grind with millennials, the Pew data indicate that a college educated millennial is actually less likely than a Gen-Xer or a Baby Boomer to favor government suppression of offensive speech. Concordantly, the college educated millennial is more likely than both the Gen-Xer and the Baby Boomer to think that people should be able to say offensive things publicly.

Beyond these findings, however, the weighted UCLA survey data that Rampell uses lumps together respondents who “strongly agree” and who “agree somewhat” with the statements in question, though Rampell elects not to qualify the difference between such responses. If, for example, you think it’s reasonable for a college to choose not to give a platform to a terrorist or a Holocaust denier or an avowed white supremacist, you might therefore “agree somewhat” that colleges should exercise the power to ban extreme speakers. Between “agree somewhat” and “agree strongly” is a lot of nuance for which the data don’t account, so it’s irresponsible to suggest that “agree somewhat” is tantamount to an anti-free-speech position. In fact, according to the UCLA survey (and the Washington Post article), incoming college students are also more likely than in prior years to anticipate being involved in a protest in college. That is, if anything, a positive sign for free speech on campus, notably not a mandate for progressive-only protesting.

The point, then, is not only that “hard data” do not support the conclusion that “liberal intolerance” is a particularly college or free-speech problem, it’s also that there is no “Ivory Tower,” no college that exists outside of the pressures, flaws and bigger-picture developments of a “real world” that seems to care about intellectual development and diversity only when it’s criticizing colleges and college students. The successful construction of a stereotype—the college student as a progressive petty tyrant—only excuses the role of social developments larger than those happening on campus in shaping who goes to college, how they experience the world and what they think when they arrive on campus. As such, this exercise in stereotyping and ridiculing college students only undermines educators’ ability to adjust to the real challenges that come with each generation of college students.