Time for a red carpet revolution: Stars have a huge platform to use — if they dare

Tonight before the Oscars, what if everyone ignored "who are you wearing?" and spoke out on diversity instead? 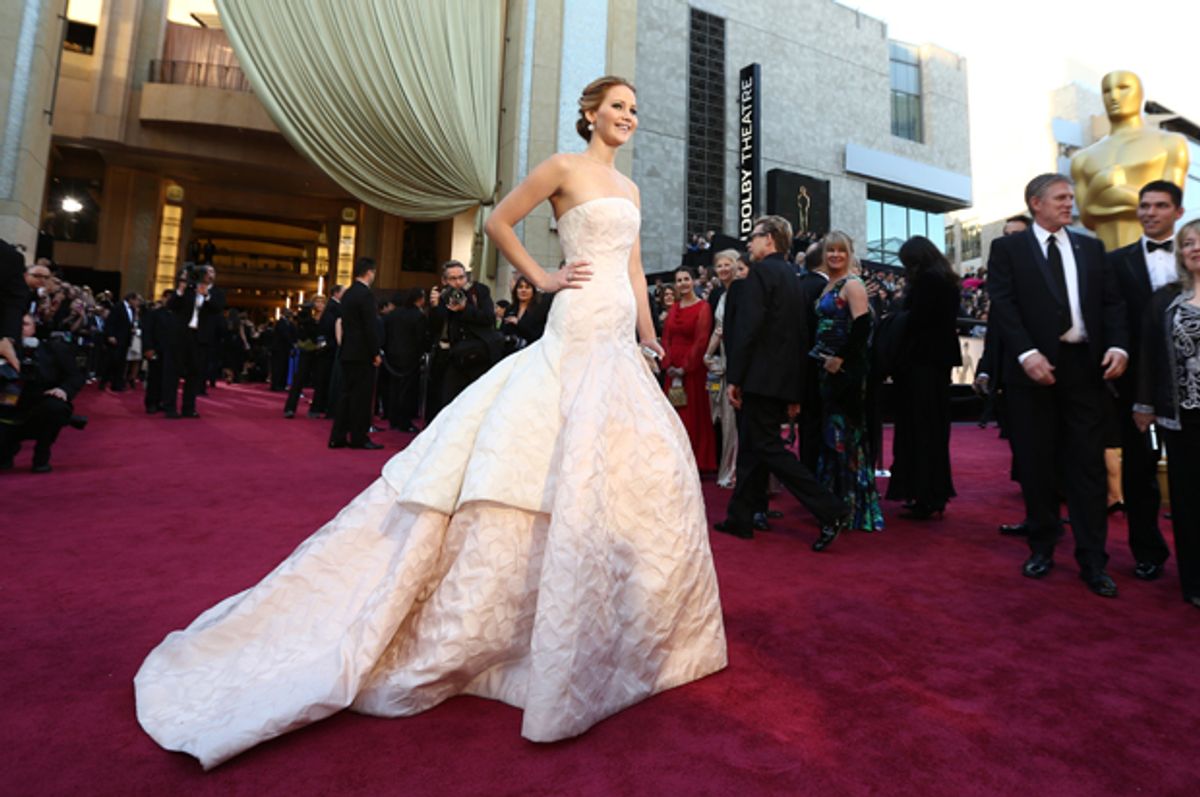 Actress Jennifer Lawrence arrives at the Oscars at the Dolby Theatre on Sunday Feb. 24, 2013, in Los Angeles. (AP/Matt Sayles)
--

This time, it's about more than getting rid of the mani-cam. No matter how bleak the subject matter of the nominated films, no matter how intense the performances of the nominated actors, Oscar night is generally presumed to be a night for merriment. Inside the show, there's a jocular host who cracks jokes about the beautiful, overpaid individuals celebrating themselves. Outside, there's the parade of pretty people answering inane questions about the contents of their purses. But from the moment this year's nominations were announced — and the Academy's shockingly epic failure of diversity became the rallying cry #OscarsSoWhite — this awards season has been unique. But come Sunday night, will the red carpet be the place Hollywood really takes a stand and talks honestly about itself?

The increasingly drawn out Oscar night red carpet coverage has, over the past several years, led to a glut of dumbed down entertainment journalism, most of it in the form of treating women like they're corgis being led around for inspection at a kennel show. Fortunately, that's been changing. It was a pivotal moment when, two years ago, Cate Blanchett bristled at the "E! News" camera that was doing a head to toe body scan of her and asked, "Do you do that to the guys?" Thanks in no small part to the Representation Project’s #AskHerMore campaign and the push to go beyond "Who are you wearing?" the way that journalists talk to the celebrities has begun to change. But for the men and women on both sides of the microphone, Sunday evening will be a different kind of test. With so much that needed to be talked about right now, will reporters actually ask better questions — and will stars give better answers?

Just because a person can capably portray doctors and politicians and geniuses doesn't make that person insightful or smart. And this past season has already been chock full of mixed results for those looking for pearls of wisdom from the industry elite. Some have called for boycotting the event, and others, like best song nominee Abel Tesfaye, have tactfully said, "I’m glad this has sparked a conversation." But others have managed to shove their feet partially to entirely into their mouths.

Last month, best actress nominee Charlotte Rampling observed, "One can never really know, but perhaps the black actors did not deserve to make the final list" and suggested that the controversy was "racist to whites." And in a BBC interview two-time Oscar winner Michael Caine unhelpfully noted, "There are loads of black actors; I think in the end you can’t vote for an actor because he’s black. You can’t say: I’m going to vote for him, he’s not very good but he’s black, I’ll vote for him. You’ve got to give a good performance."

At Sundance, former nominee Julie Delpy said, "It’s interesting that women can’t talk. I sometimes wish I were African-American, because at least people don’t bash them afterwards when they say something about a reality, which is that we live in a xenophobic environment — not just the Academy, obviously, just the entire world."

Four-time winner Joel Cohen, meanwhile, just shrugged that "The Oscars are not that important." He added, "Why they would single out a particular movie and say, 'Why aren’t there black or Chinese or Martians in this movie? What’s going on?' That’s the question I don’t understand." And speaking with the Hollywood Reporter, three-time Oscar winner Steven Spielberg said he supports diversity, but seemed unfamiliar with the concept of privilege when he added that "I don't believe that there is inherent or dormant racism because of the amount of white academy members."

So in the run up to tonight's show, you can bet that in addition to last-minute fittings and facials, the stars are being groomed on what to say so they don't sound like total idiots if — or rather, when — they're asked a question harder than what they think of the Los Angeles weather. Many will likely play it safely, like nominee Sylvester Stallone, who at the 2016 Oscars luncheon said, "Adaptation and evolving is definitely necessary," or "Mad Max: Fury Road" director George Miller, who at the same event boldly declared, "If the film warrants it, of course there should be diversity of all kinds."

But wouldn't it be incredible if even one of the evening's future winners — most of whom will be white as hell — came out and said something smart and interesting and insightful? If somebody said, yeah, it's 2016, and a whole lot of great films and performances were ignored, why is that? What if the people who actually get to win Oscars, while twirling around in their tuxes and gowns, realize at last that a red carpet is a great place to speak out about how the industry treats people of color?