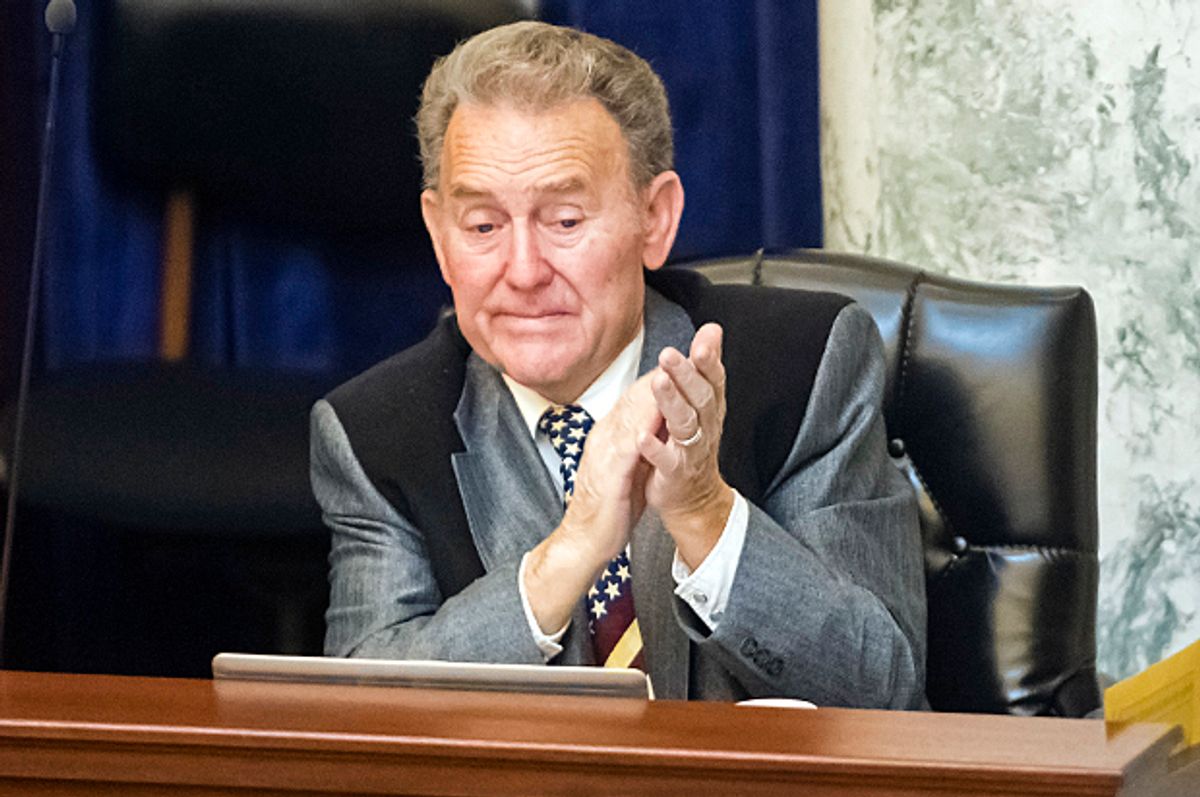 After claiming that "legitimate rape" doesn't cause pregnancy, Todd Akin went down in electoral defeat in a close race with Sen. Claire McCaskill in 2012. You would think that his loss, along with the electoral thumping that all the "rape philosophers" of the GOP got that year, would cause other Republicans to run screaming out of the room rather than allow themselves to ever go on record again saying something about rape and pregnancy.

And yet here is Idaho state legislator Pete Nielsen,  defending yet another anti-choice bill during legislative hearings, as reported by the Spokesman-Review. “Now, I’m of the understanding that in many cases of rape it does not involve any pregnancy because of the trauma of the incident," he added.

"That may be true with incest a little bit," he added, helpfully reminding everyone about the vein of perviness undergirding anti-choice amateur gynecological musings.

"Being a father of five girls, I’ve explored this a lot," he said, so that your skin will not stop crawling for the rest of the day.

This myth is both pure nonsense and electoral kryptonite, so why does it keep cropping up? After decades of failing to end legal abortion by fetishizing embryonic life, the anti-choice movement changed strategies, arguing instead that legal abortion needs to be ended to protect women. In service of this, they've constructed this myth that no woman really wants an abortion and every woman who gets an abortion is either coerced or deluded. The assumption is that God made women to bear children and, in their natural state, women just want to be having all the babies all the time. And so any woman who says no to childbirth is assumed to be broken and the only way to fix her is to force childbirth on her, which will cause her to see the light.

Under the circumstance, it's easy to see why the existence of rape-caused pregnancies might disturb their neat little theory. It's hard enough to sell the notion that all women, deep down inside, want to be pregnant right this minute. It's even harder to argue that women want to have babies by rapists. And so the only thing anti-choicers can do is simply deny that this problem ever comes up.

This myth, that women secretly want to be pregnant all the time, is the driving force behind the Supreme Court case, Whole Women's Health v. Cole, that's being argued on Wednesday. The official argument of the state of Texas is that a series of regulations of abortion clinics, including mandatory hospital admitting privileges and requiring hospital-style surgical suites in every abortion clinic, are necessary to protect women's health, but no one, probably not even the lawyers making this argument, actually believes that.

Both the American Medical Association and the American Congress of Obstetricians and Gynecologists have come out against the law, pointing out there is no medical reason for these expensive and often impossible requirements. It's clear the purpose of the law is to shut down clinics and to make it impossible for women in the state to get safe, legal abortions.

"If this law is overturned, innocent children will die, women will be injured and our work of ending abortion in this generation will face a major roadblock," the anti-choice rally website reads.

The problem with the "women will be injured" argument is it's pure poppycock. Like it or not, but a legally obtained abortion is literally the safest outcome of a pregnancy. Hospitalization for abortion is incredibly rare, with less than 1% of abortions resulting in patients needing any kind of hospital care. (In contrast, over 98% of childbirth results in hospitalization.) You are 14 times more likely to die in childbirth than from an abortion. Hell, you are twice as likely to die from a penicillin shot than from abortion.

Because abortion is so safe, anti-choicers like to spin a bunch of tales about the supposed psychological damage done to women who defy their God-given role to just be having babies all the time. The New York Times ran a story on Monday about the more than 100 women who have contributed to briefs sent to the Supreme Court explaining why abortion was a good choice for them. Women explained how they were able to finish their education, get the lives and marriages they wanted instead of being trapped, and advance their careers because of abortion, but Allan E. Parker Jr., a lawyer who filed an anti-choice brief, refuses to take these women at their word.

"The abortion industry is trying to make it sound like abortion is a joyful experience," Parker told the New York Times. "But even women who say it was necessary say it was not joyful. It is a grief and a blackness, and it changes you."

It's lies all the way down, of course, starting with the notion that the "abortion industry" is trying to trick women  into thinking abortion is a day at the spa. No one is under any impression that abortion is anything but an unpleasant medical procedure, and it's particularly insulting to women's intelligence to assume we're unaware that a trip to the gynecologist is no one's idea of a good time.

But the real crux his argument is the notion that abortion inevitably causes grief and misery and that it "changes you". He's arguing through implication, but it's not particularly subtle: Women's purpose is to have babies, and any woman who chooses against that is broken.

For all that anti-choicers claim to want to "protect" women, this argument is rooted in a deep distrust and hatred of women. It assumes women are too stupid to make their own decisions. It assumes women are too stupid to know the difference between getting surgery and getting a back massage. It assumes that women exist only as baby buckets and that anything else we want in life, from finishing college to making a happy and fulfilling marriage, is secondary to our purpose in having oodles upon oodles of babies. And it, as Nielsen's comments show, requires believing that the thousands of women a year who cite "rape" as the reason for their abortion are lying sluts who are just making stuff up. These beliefs are correctly characterized not as woman-protecting, but as old-fashioned misogyny.