For those who say Beavan doesn't know how to dress for an occasion, she has two Oscars that prove you wrong 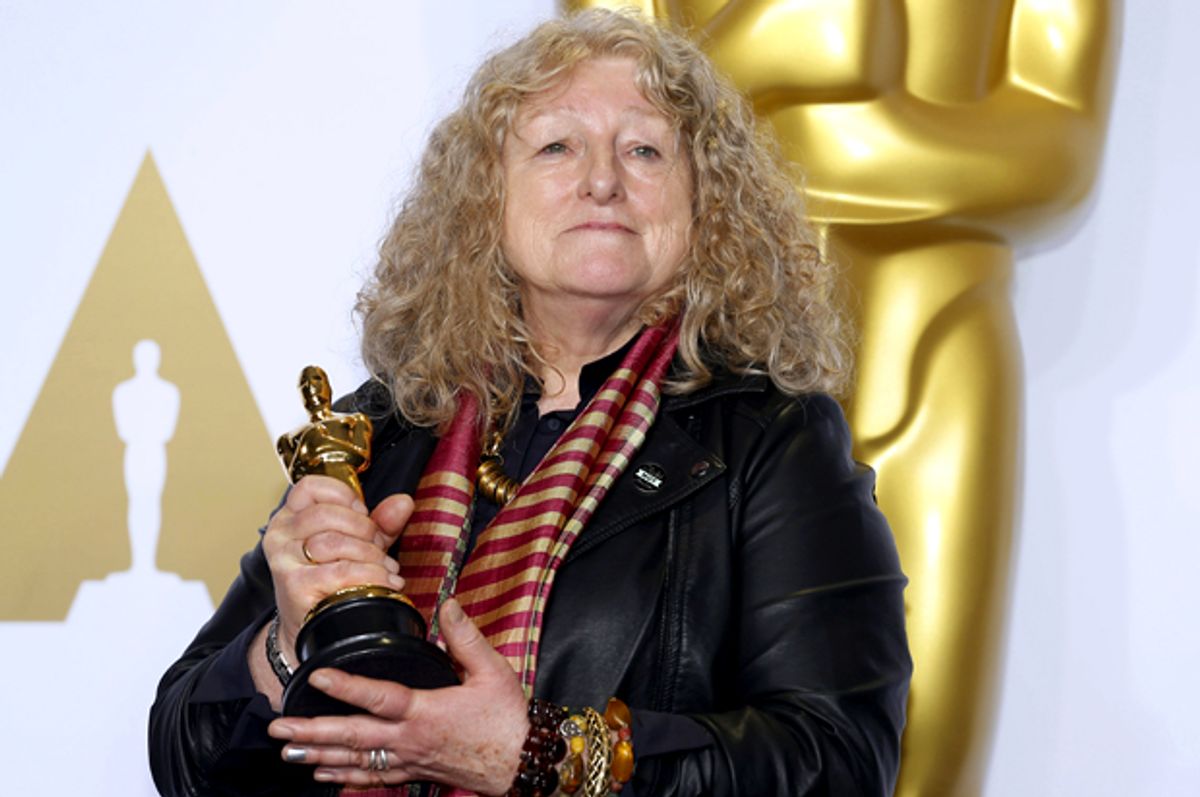 It wouldn't be the Oscars without a spirited breakdown of what everybody wore, and this year was no different. In the aftermath of Sunday's show, there was plenty of buzz about the the tasteful, elegant gowns, like those displayed by Tina Fey and Emily Blunt. There was applause for the edgy numbers from the fashion rebels, like Lady Gaga's pants, and the risk takers who make it look easy, like Kerry Washington and Cate Blanchett. Then, as happens every so often, there was the surprise hit — the ensemble worn by the person who marches so completely to her own drummer that she's in a class all by herself. And if you'd missed the broadcast but you heard on Monday morning that this year's most daring Oscars look was put together by the woman who carried home the Academy Award for best costume design, you might not have been surprised. But who knew how rebellious, how revolutionary a woman could appear just for dressing like she's going to the supermarket?

Nearly 30 years after co-winning her first Academy Award — for the elegant, Edwardian costumes of "A Room With a View" — English designer Jenny Beavan finally scored again. Her work spans a vast variety of styles — she's been nominated in the past for her Regency period costumes of "Sense and Sensibility" and her cool, '30s-era duds for "Gosford Park" — but she won this year for what's been called a "riot of post-apocalyptic steampunk" in "Mad Max: Fury Road." And she took the prize her way — looking comfortable as hell.

Beavan has never been the dressy-dress type. When she won back in 1987, she wore a tux and a gold scarf. Last month at the BAFTA awards, she showed up in a black leather jacket, T-shirt, pants and scarf. At the show, host Stephen Fry provoked online outrage when he quipped that "Only one of the great cinematic costume designers would come to the awards dressed like a bag lady," but Beavan herself later shrugged, "We are friends, and I am absolutely not upset, but I don’t want to talk any further because if I talk about it it will just create more fuss."

And five years ago, when she was nominated for "The King's Speech," she showed up similarly casually attired. She's explained, "I have no interest in my own clothes or in clothes in general. My love is creating character through clothes."

On Sunday evening, the 65-year-old Londoner once again rocked her signature look, in a jacket she described as "Marks & Spencer with Swarovski at the back." It featured a skull and a ring of flames. She completed the ensemble with a black top, black pants, striped scarf, plenty of bangles and silver nail polish on one finger. Her hair was loose and curly and graying. Her makeup was minimal. Her face showed no sign of fillers or surgery, and her body appeared to be unrestricted by shapewear. And almost immediately, writer Dalton Ross' Vine of her walking toward the podium, smiling just a little to herself as she strode by a bunch of unclapping audience members, went viral. Of particular note in the crowd was Alejandro González Iñárritu — who won best director last year for "Birdman" and would go on to win again Sunday night for "The Revenant" — who scowled with his arms crossed as she walked past. Was the lackluster audience response bad sportsmanship? Sheer laziness? Was it, as writer Caitlin Moran said, "Men in suits going 'UGH!' over a woman who hasn't starved herself into a dress & crippled herself in heels"? It doesn't really matter, because Beavan looked like she could not have cared less about how they felt about her moment.

Later in the evening, Beavan said that "I had a bit of a shoe malfunction and the glitter fell off. I just like feeling comfortable and as far as I'm concerned I'm really dressed up. I am very happy to talk about it. I don't do frocks and absolutely don't do heels, I have a bad back. I look ridiculous in a beautiful gown. This was a homage to 'Mad Max' and I obviously didn't get it quite right at the BAFTAs — the scarf was meant to be an oil rag."

And while some online critics have groused that her outfit "was inappropriate to the event," I can't help thinking it was incredibly rock 'n' roll. After all, when the remaining members of the Eagles performed earlier this month at the Grammys, they were similarly attired and literally no one gave a toss. So if you think Jenny Beavan doesn't know how to dress, she's now got two Oscars that say she does. And if you were really paying attention to what she was wearing Sunday night, all you'd have seen was a smile, and a look of well-earned pride.