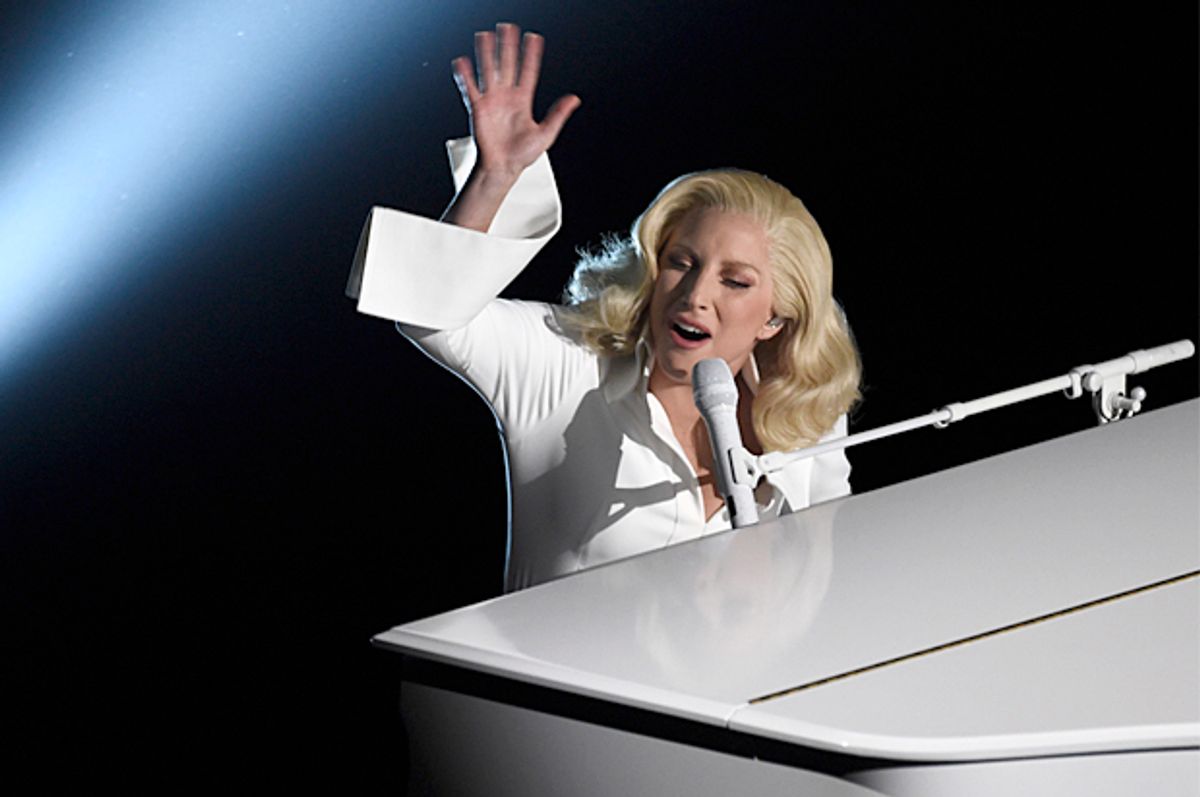 From red carpet fashion to the nominees themselves, awards season serves to reflect cultural trends and values as expressed (and celebrated) in film throughout the last year. Last night’s Oscars was no different, and served to highlight awareness of sexual abuse as it permeates our collective consciousness.

Lady Gaga stole the show with her powerful performance of “‘Til It Happens to You,” her Oscar-nominated song about sexual assault featured in the documentary “The Hunting Ground,” a film about rape on college campuses. Gaga was introduced by Vice President Joe Biden, who encouraged the audience to take action against sexual assault on college campuses by directing viewers to ItsOnUs.org before the pop star/actress/survivor took the stage.

One of the most important messages of the performance was her reminder to fellow survivors of sexual abuse that they aren’t alone. Gaga was joined by men and women -- all survivors -- who had words and phrases, including “Not your fault,” “Survivor” and “Unbreakable,” written on their forearms. Judging by the audience's reaction, her performance made an impression:

Life following sexual trauma is a difficult road to travel for survivors who often feel betrayed and exposed, making the process of loving again seem nearly impossible. Gaga took to Instagram to thank her fiancé Taylor Kinney for his unwavering support in spite of the assault she underwent when she was 19, which still affects her.

“I never thought anyone would ever love me because I felt like I was ruined by my abuser,” she captioned a photo of herself and Kinney from behind-the-scenes at the Oscars. “But he loves the survivor in me. He stood by me all night proud and unashamedly. THAT’S a real man,” she wrote in a caption featuring a photo of the couple.

Brie Larson, who earned the golden statue for Best Actress for her role in “Room,” hugged the survivors who joined Gaga for her performance as they left the stage. Larson’s portrayal of a mother who was been held captive for seven years and finally able to escape continued abuse from her captor with her son (the product of rape) highlighted the often-overlooked psychological aftermath survivors go through. How does one re-adapt to life following such an event? Truth is, no one is ever wholly the same, and it’s important for both survivors and their loved ones to understand the mechanisms of recovery. “Room” exquisitely captured myriad emotions ranging from depression to resentment to hope, again reminding survivors of the strength required to not only survive, but also move on.

“Mad Max: Fury Road,” the high-action film starring Charlize Theron, which racked up the most awards at last night’s show, is also about survivors of sexual assault—the "wives" of post-apocalyptic dictator Immortan Joe escaping a life of constant rape and forced pregnancy and childbirth with the help of Theron's fearless heroine Imperator Furiosa.

“Spotlight” won the award for best picture, shining yet more light on acknowledging and taking action against sexual assault on an institutional level. The film portrays the real life story of a team of investigative journalists at the Boston Globe who unraveled a previously-unfathomable sexual abuse scandal in the Catholic Church and the Church's deliberate cover-up of abuse of children at the hands of pedophile priests.

“This film gave a voice to survivors,” said producer Michael Sugar. “And this film amplifies that voice, which we hope will become a choir that we hope will resonate all the way to the Vatican.”

The collective voice of survivors and the message that sexual abuse is not to be taking lightly or ignored certainly reached its way to Hollywood. It’s no coincidence that writers, producers and actors are being drawn to films exposing the results of sexual assault. At this point, sexual abuse cases have unfortunately permeated news stories as we learn more and more about how common sexual assault is, and begin to take the necessary steps to protect survivors and establish preventative measures.

Talking about it and raising awareness is a crucial first step, but there’s still much more work to be done. Policies must be passed to protect survivors, and we as a culture need to continue to be sensitive to the psychological effects ignited after an assault. One of the most powerful statements made by all three films and Lady Gaga’s performance was to remind survivors they are not defined by their attack, nor by their attackers. Hopefully now survivors of sexual assault will feel more comfortable reporting sexual abuse, and the legal system better prepared to prosecute offenders. Last night’s Oscars solidified the fact that survivors have a powerful voice, now it’s important that they continue to be heard.