Few Catholics, lay or clergy, believe using contraception puts anyone's soul at risk. Even the pope has weighed in 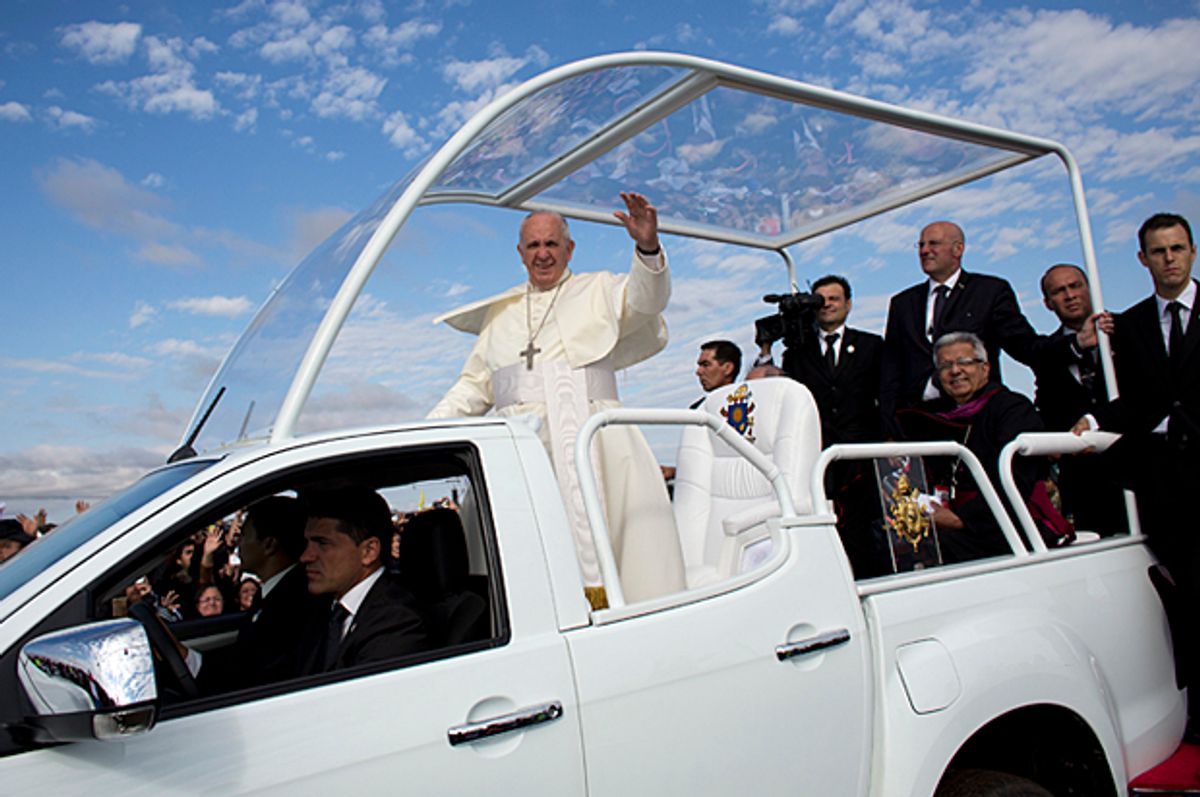 Since contraception is intrinsically evil, it cannot be justified by the good intention to avoid harm to the prenatal, nor by the difficult circumstance of the spread of this virus. – Ron Conte

What's disturbing is that any posters seem to think, in spite of clear and unequivocal doctrinal teaching on this topic, that there are still some (any) circumstances in which ABC [artificial birth control] for the purpose of preventing pregnancy is permissible. There aren't. Period. Full Stop. End of Story. If you disagree, you need to work on better forming your conscience. – SMOM

A couple conceive and possibly have a child with a birth defect . . . "Suffering" for decades. [or] a couple uses condoms or other forms of birth control. Eternal suffering as they are separated from God. . .  Pushing condoms to reduce a small percentage of birth defects puts millions of souls at risk. Usige

In reality, any Catholic parent or prospective parent facing the nightmare of Zika should know that the relevant Catholic history and theology are far, far from unequivocal, and few Catholics—either clergy or lay—believe that using contraception puts anyone’s soul at risk. In fact, Pope Francis himself has now weighed in on the side of sanctioning contraception during the Zika pandemic, citing Pope Paul VI’s 1960s decision to allow nuns in the Belgian Congo to use contraceptives during a time of violence and indiscriminate rape.

A Brief History of Catholic Debate about Birth Control

There’s no denying that the Vatican has a long record of advocating against planned parenthood—broadly defined--and lobbying globally to reduce contraceptive access. The “doctrinal teaching” mentioned is a Papal encyclical, Humanae Vitae, that explicitly forbids any family planning except periodic abstinence. But the story of that document sheds light on why most practicing Catholics at the time immediately rejected it, and why most today use some form of modern family planning.

In the decade of the '60s, change was happening at an ever faster pace—in particular, change in sexual mores and gender roles—and the Church was under pressure to reconsider traditional opposition to family planning. The pill—first approved in the U.S. in 1961—was rapidly becoming available to married women. More and more couples were limiting their number of offspring—and the social benefits seemed obvious to many.

In 1966, a “Pontifical Commission on Birth Control” made up of 72 members including bishops, theologians, doctors and even five women issued a report recommending that the pill be accepted as an extension of the natural cycle. “For it is natural to man to use his skill in order to put under human control what is given by physical nature.”

Four dissenters signed onto a minority report arguing that a reversal would amount to conceding that Protestants had been right—a significant threat to Catholic moral authority, and in particular the Church’s 19th century declaration of papal infallibility:

“If it should be declared that contraception is not evil in itself, then we should have to concede frankly that the Holy Spirit had been on the side of the Protestant churches. . .  It should likewise have to be admitted that for a half a century the Spirit failed to protect Pius XI, Pius XII, and a large part of the Catholic hierarchy from a very serious error. This would mean that the leaders of the Church, acting with extreme imprudence, had condemned thousands of innocent human acts, forbidding, under pain of eternal damnation.”

In 1968, Pope Paul VI sided with the minority (and with papal infallibility), concluding the inquiry process with the Humanae Vitae encyclical, subtitled "On the Regulation of Birth." The encyclical rejects all modern forms of birth control as “artificial,” affirming that sex, while unitive, should be open to procreation. In a convoluted compromise, it does allow for periodic abstinence during a woman’s fertile period.

By the time the encyclical was issued, many Catholics had experienced the positive benefits of modern contraception on education, health, family well-being and happiness. The Church’s anti-contraception stance slowed adoption of birth control in the poorest Catholic majority countries. But in Europe and the U.S., it instead did exactly what some Church authorities were trying to avoid: It undermined the moral authority of the ecclesiastical hierarchy. American priests who saw family planning as a positive social good made their disagreement public within days, and while a generation of devout Catholic women submitted to pregnancy after pregnancy—the price many paid was obvious to their own children. Former nun Mary Johnson is the daughter of one such 1960s mother:

“She had just started her nursing career—barely a year out of college. By the time I was seven there were five of us. Not that she would go back or say that she regrets us, but I know it was very very difficult for her. It was a huge burden on her which made it not so easy for us, either."

Today use of modern contraceptives among Catholic couples approximates that among non-Catholics, and the Vatican’s opposition to contraception continue to erode the credibility of the Church. In Johnson’s words:

“Most Catholics realize that the Vatican is led by old celibate men who know little about families or women. People realize that there is a moral good in planning our families and being able to control what happens and how you build that family--or not. It’s more of a responsibility than a sin.”

Some earnest believers do get stuck, says Johnson. They get caught up in the idea of papal infallibility, a sort of legalism on steroids. Hence the view of some that it’s now worth an eternity in hell simply to prevent one lifetime of microcephaly. But some Catholic authorities argue that such legalism itself is at odds with Catholic tradition, which from the time of Augustine has taught that the ultimate moral guide must be a person’s own individual conscience.

In his Summa Theologica, Church Father Thomas Aquinas wrote a complex argument that has developed into a Catholic doctrine now known as “the primacy of conscience.” Conscience, Aquinas argues, is guided by reason and comes directly from God, and so there is no sin in following one’s conscience, even if conscience is in error. Aquinas pointed to the writings of Augustine, who said, “Return to your conscience, question it…. Turn inward, brethren, and in everything you do, see God as your witness.”

During intervening centuries, theologians have vigorously debated what this doctrine means and when it applies. Philosophy professor John Kavanaugh asserts that each person has a responsibility to ground their own conscience in evidence:

“As a practical moral judgment, conscience takes the form: “I ought to do X.” Aquinas points out that when I make such a judgment, I should follow it. But acting on my conscience is not enough. Like any other kind of judgment—business, artistic, scientific or athletic—we base our moral judgments not only on principles but on evidence, data and information. A judgment made without data, evidence or information is a foolish one indeed. Thus, Aquinas thought it is as important to inform one’s conscience properly as it is to follow it. If I refuse to look at evidence or information in forming my moral judgment, I am actually refusing to act morally.”

Although the idea that the Pope is infallible traces back to the Middle Ages, it became dogma during the first Vatican Council, in 1869-1870. Protestants were alternately appalled and derisive, and Catholic theologians felt the heat. In 1875, John Henry Cardinal Newman wrote a 150-page letter to the Duke of Norfolk, responding to accusations that Catholics had “no mental freedom.” Newman protested that Catholics didn’t deserve the “injurious reproach that we are captives and slaves of the Pope.” He famously remarked, “I shall drink – to the Pope, if you please – still, to Conscience first, and to the Pope afterwards.”

Another famous quote supporting the primacy of conscience comes from a document of the Second Vatican Council, Gaudium et Spes, a document that, while extolling the inviolability of conscience, also ironically insists that Catholic consciences be formed by church teaching regarding "blameworthy" methods of birth control: “For we have in our heart, a law inscribed by God… our conscience is our most secret core and our sanctuary. There we are alone with God whose voice echoes in our depths.” --Gaudium et Spes, #16

Primacy of conscience is reinforced in Catechism #1777 -- “When he listens to his conscience, the prudent man can hear God speaking.”—and in Canon Law, which says that all persons “possess the right of embracing and observing the truth which they have come to know.” (#748)

The inviolability of individual conscience has been cited by Catholics who are theologically conservative as well as those who are theologically progressive, in the Hobby Lobby argument that Catholic-owned corporations shouldn’t be required to cover birth control and—on the other side—in arguments for the ordination of women. It has led Catholics to defy ecclesiastical authority and tradition, as in Latin America’s liberation theology movement, in which priests aligned themselves with the poor. It has conversely led Catholics to argue that they shouldn’t have to supply pizza or flowers for gay weddings. Some of these arguments may seem either ludicrous or commonsensical from the outside, but the point is that the primacy of individual conscience is a profoundly central part of the Catholic tradition.

Zika Creates a Crisis of Conscience

For many Latin American Catholics, the Vatican’s opposition to family planning has long been simply background noise, a regrettable but ignorable quirk of old men—like excessive nose and ear hair. For others, it has been an inviolable article of faith. But the Zika pandemic has created a crisis of conscience for Catholics across the spectrum.

Evidence linking Zika to microcephaly is growing, as is concern that Zika may cause lesser forms of brain damage even when fetal cranium size is normal. Governments in plague-infected countries have advised women to delay pregnancy, but thanks to the influence of the Church, many desperate women have few options for managing their fertility and yet risk prison if they abort a high-risk pregnancy. According to the Guttmacher Institute, Latin American and Caribbean countries have the world’s highest rate of unintended pregnancy, and many women lack the power to deny sex to partners who demand it. Almost a third of women in the region report intimate partner violence.

Zika shines a harsh spotlight on the Church’s disempowerment of women and pervasive global interference in family planning policy, and the picture isn’t pretty. Condemning poor, desperate people to reproductive roulette seems cold and cruel under normal circumstances—but given present conditions even some conservatives are cringing.

As well they should be.

How well the Church itself fares through Zika will depend on how well individual women, children, families and communities fare. In the words of Brian Green at Santa Clara University, “At this point it becomes clear how there can be a tension in the Church’s teaching: we must never violate our conscience and our conscience should match Church teaching… but what if it does not? . . What is in dispute, then, is not so much the primacy of conscience, but the primacy of the Church’s authority for teaching conscience in a substantive way.”

Will the Church hierarchy assert, as some bishops have, that there can be no deviation from traditional teachings about family planning? Or will the hierarchy acknowledge, as Pope Francis himself has hinted, that there may be higher considerations? Either way, individual Catholics will have to weigh their spiritual priorities in light of their own lives and loves.