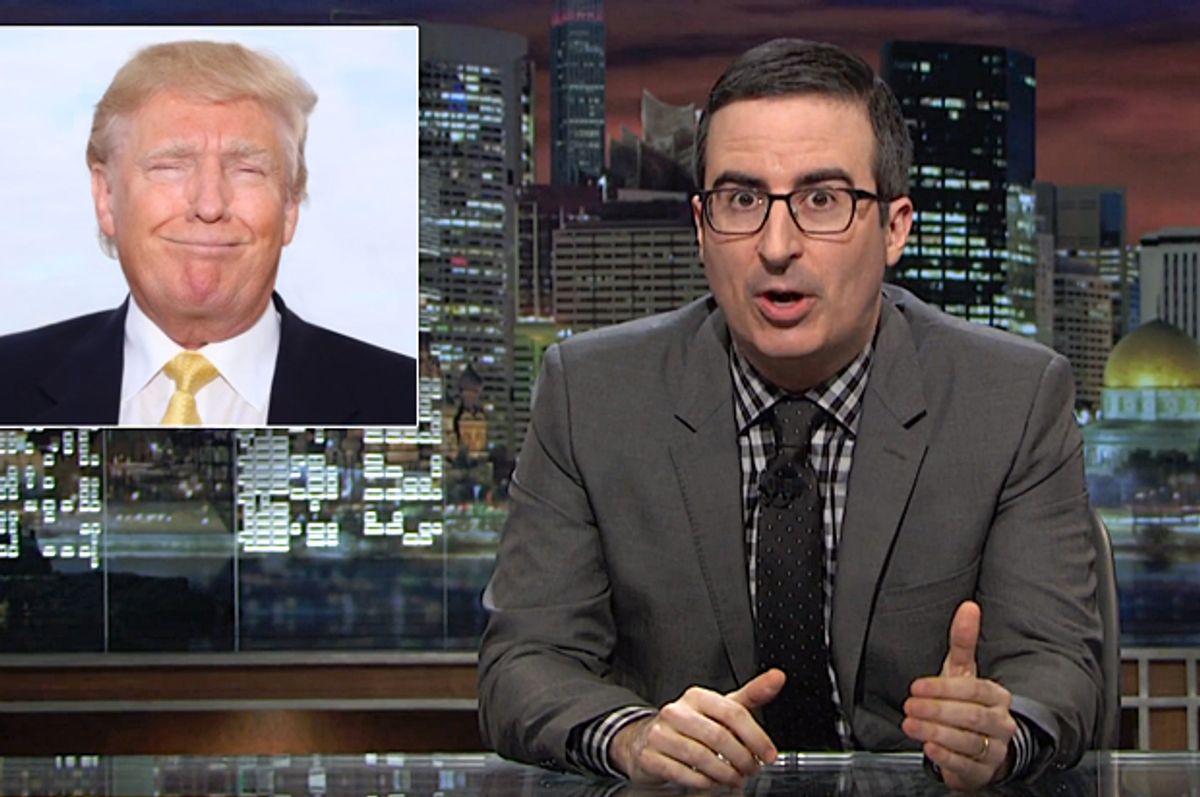 For a political comedian who came up through “The Daily Show,” John Oliver has been oddly silent – for the most part -- on the presidential race. He’s done great bits on gun control, on abortion, on the difficulty of refugees coming to the United States, and dozens of other topics. Last year, he said he didn’t see the point in weighing in on 2016 while it was still 2015. But last night, he devoted most of “Last Week Tonight” to Donald Trump, and it may be the best Trump bit anyone has done besides the Funny or Die adaptation of “The Art of the Deal.”

Part of what was so good about it was that Oliver’s wiry amped-up style contrasts so well with Trump’s passive-aggressive smugness (the stance Trump employs when he is not being aggressive in a more conventional way). But part of what makes it great is that Oliver shows footage of Trump fans talking about what they like about the mogul. Oliver then contrasts the claims made for Trump – by the man and his admirers – and shows that the candidate is mostly a fraud. Too often, liberals and lefties just demonize their opponents. Oliver cuts up Trump pretty thoroughly, but he does it by first listening to his fans.

“That’s objectively funny,” he said after Trump made a joke about Marco Rubio. “There is a part of me that even likes this guy. It’s a part of me I hate – but it’s a part of me.” After discussing Trump’s status as a protest candidate, Oliver cuts to Trump fans talking about how Trump tells it like it is, tells the truth, funds his own campaign, and possesses mighty business skills.

So how about that campaign self-funding? Trump, it turns out, asks for money just like any other candidate. (He’s already accepted $7.5 million from individuals.) “If he didn’t want it, maybe he shouldn’t have two ‘donate’ buttons on his website,” Oliver says, while the site shows up behind him, “because money isn’t unsolicited when you have to ask for someone’s credit card expiration date to receive it.”

Oliver also demolishes Trump’s purported genius for business, describing the candidate’s real estate venture just a year before the market begins to collapse. “I think it’s a great time to be starting a mortgage company,” Trump says in a piece of old footage from 2006. And then, using one of his favorite words: “It’s going to be a terrific company.” Needless to say, it didn't last long.

Oliver also mocked Trump’s supposed toughness, and his constant threat to sue people. “’I’ll sue you’ is Trump's version of ‘Bazinga,’" the comedian said. "It doesn’t really mean anything, but he says it all the time.”

And Oliver gets at the candidate’s odd way of expressing himself. “Everybody loves me,” Trump says in a weirdly – but typically -- inarticulate passage about his Ivy League education. “I know words – I have the best words.”

One of Oliver’s best bits has to do with Spy magazine’s old taunt that Trump was a “short-fingered vulgarian.” Oliver quotes a Vanity Fair letter by Graydon Carter, a Spy co-founder:

“To this day, I receive the occasional envelope from Trump. There is always a photo of him—generally a tear sheet from a magazine. On all of them he has circled his hand in gold Sharpie in a valiant effort to highlight the length of his fingers… Like the other packages, this one included a circled hand and the words, also written in gold Sharpie: ‘See, not so short!’”

No one should be surprised at how effective Oliver’s 20-minute demolition job was: The guy is just about always funny. But what’s unusual – and what made the Oliver takedown one of the best so far -- was the way the comedian admits to Trump’s appeal. It’s a reminder -- as Trump gets closer to winning the Republican nomination -- of why Oliver is the best in the business right now.